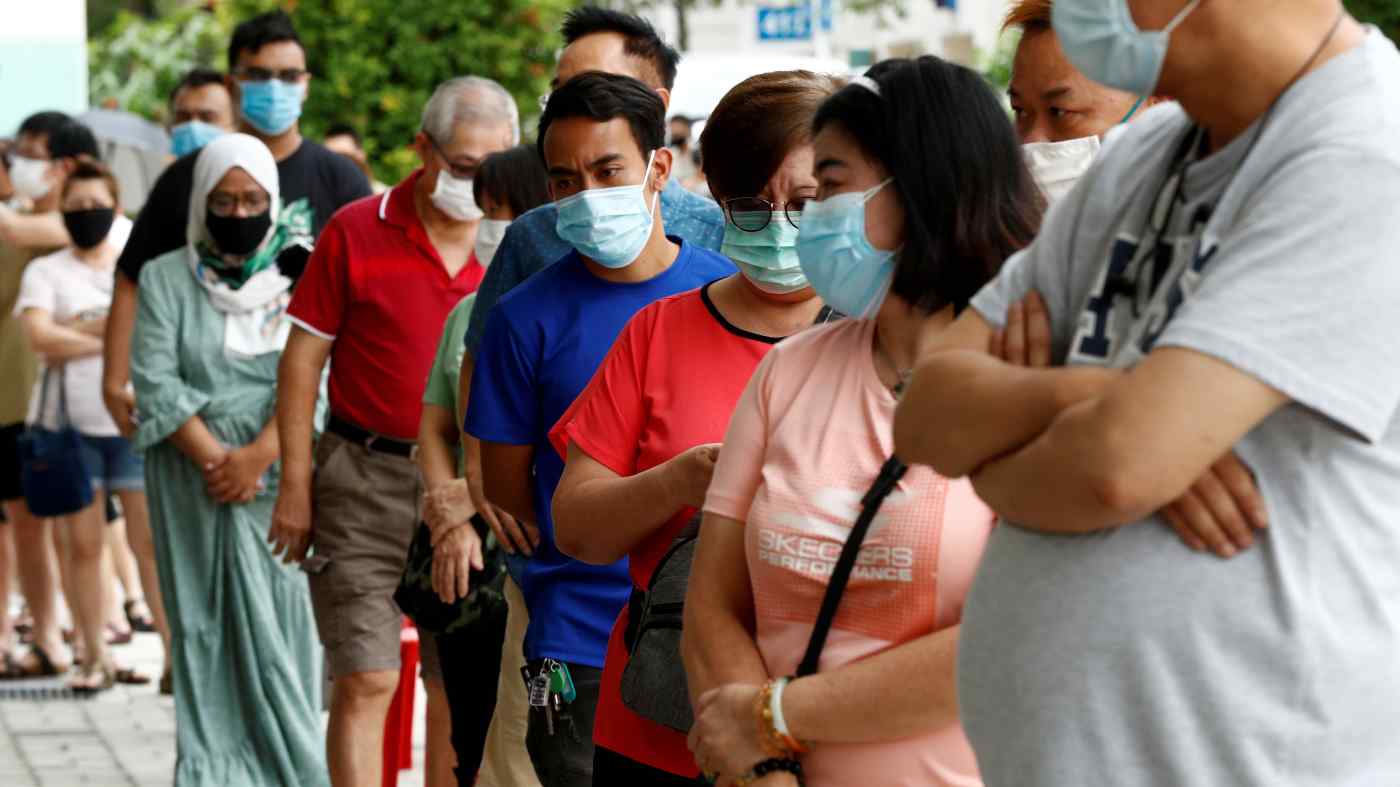 SINGAPORE -- Voting has ended in Singapore's general election, after residents streamed to the polls to choose the government that will lead them through the COVID-19 crisis.

Polling stations closed at 10 p.m. local time, two hours later than scheduled due to long queues at some locations. Initial results are expected to trickle out through the night, with the full makeup of the next parliament likely to be known by early Saturday morning. For the latest developments, follow the Nikkei Asian Review's election live blog.

Friday was declared a public holiday for the polls. At the Poi Ching School polling station in the eastern part of the city-state, voters who gathered in the morning encountered a number of safeguards against the coronavirus: temperature checks at the entrance, a request to wear disposable gloves, staff members in face shields, and yellow tape pasted around the venue to ensure social distancing.

As the day went on, the precautions appeared to be holding up the process, creating lengthy lines outside some stations.

This prompted the government's Elections Department to do away with the disposable glove requirement, since voters were being asked to sanitize their hands anyway. "We observed that [the gloves] in particular contributed to the longer than usual voting times," the department said in a statement.

Even Prime Minister Lee Hsien Loong had to wait: He was seen standing in a queue outside a polling station in the early afternoon, the Straits Times newspaper reported online. The prime minister was dressed in the ruling People's Action Party's trademark white shirt and pants, with a face mask.

Voting is compulsory for citizens aged 21 and up. As of 5 p.m., 2,159,000 people -- 81% of the 2.65 million registered voters -- had cast their ballots, the Elections Department said. But shortly after 7 p.m., the department extended the hours, prompting complaints from at least one opposition party. By the original closing time of 8 p.m., the turnout was already 96%, surpassing the 2015 ratio of 93.56%.

The PAP, in power since independence in 1965, is expected to win again. But this election has come with a number of new wrinkles -- a historic economic recession brought on by the pandemic, unprecedented opposition challengers, and questions about the PAP's leadership succession. 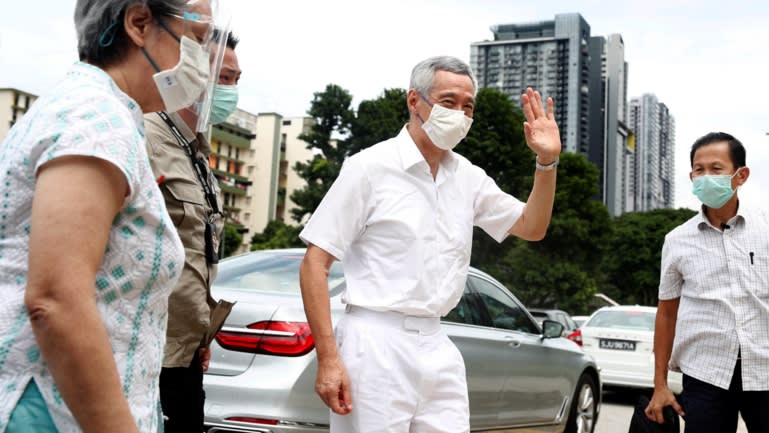 Throughout the nine-day campaign period, which ended Wednesday before a "cooling off" day, the PAP faced spirited rivals determined to send more alternative voices to the legislature.

The Workers' Party, the only opposition group that had seats in the last parliament, has amplified issues such as high living costs, calling for more support for average Singaporeans. "If elected, we will call for a re-examination of our nation's economic model, to finally raise the productivity of our workers that has so far eluded us," candidate Jamus Lim stressed in a broadcast message.

Immigration became a major issue as well, after a heated debate exchange in which an opposition leader accused the PAP of aiming to nearly double the population by inviting more foreign workers.

Most politics watchers expect the PAP to nevertheless retain its supermajority, winning most of the 93 seats up for grabs. In the previous election in 2015, the party took 83 of 89 available seats.

Some, including Workers' Party chief Pritam Singh, have warned that opposition candidates face a real risk of a "wipeout."

But even if the PAP prevails easily, it will have little time to bask in the victory.

With the coronavirus still gripping the world, Singapore's government has projected a 4% to 7% economic contraction this year, the worst performance in the country's 55-year history. As of Wednesday, infections in the city-state had surpassed 45,000, largely due to massive outbreaks in dormitories for migrant workers.

Pandemic management and economic recovery strategies featured prominently in the election campaign -- especially jobs. Despite the high case count, the ruling party cited the low number of deaths -- only 26 so far -- and huge relief packages worth over 90 billion Singapore dollars ($64 billion) as it presented itself as a team of steady hands.

"The key thing that came out from our walkabouts [was] that COVID is a very serious situation," Heng Swee Keat, the deputy prime minister and finance minister seen as Lee Hsien Loong's heir apparent, said of his experience on the trail. "We need to overcome this crisis and we must emerge stronger from this crisis and stay together as one people." Speaking to reporters at a "hawker center" food court in his constituency on Wednesday, Heng added: "This election is a serious election. It is about our lives, jobs and future."

Singapore also faces external uncertainties. Even before the coronavirus, the trade-reliant city-state was reeling from the escalating rivalry between China and the U.S. Geopolitical tensions are also hitting key trade partners like India and Hong Kong.

Though little was heard about these challenges during the race, Prime Minister Lee did allude to them back on June 23, when he announced the dissolution of parliament. He said that navigating global changes and protecting national interests would "require diplomatic skills and a deft touch." 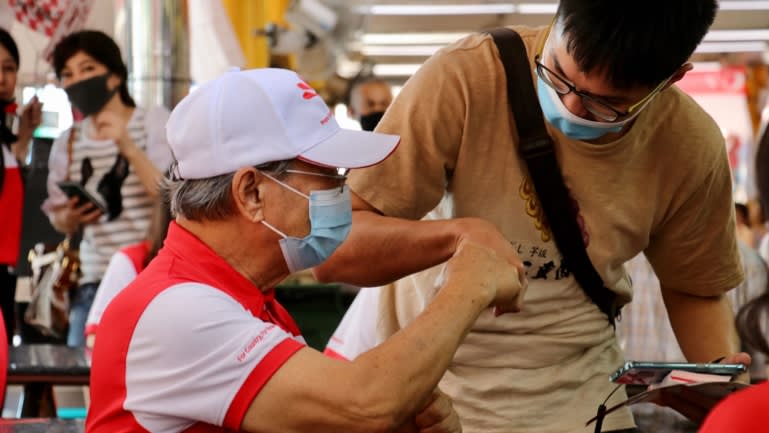 For the ruling party, another thing that may require a deft touch is a looming leadership transition. All eyes are on Heng's performance in the polls, as the 59-year-old is expected to take over for Lee during the next term. But the timing is very much up in the air.

The 68-year-old Lee is Singapore's third prime minister, after his late father Lee Kuan Yew and the retiring Goh Chok Tong. In office since 2004, Lee has said he does not wish to remain prime minister past age 70, and in recent years he promoted Heng and other younger "fourth generation" or "4G" politicians to key posts.

The pandemic, however, has muddied the waters. On Monday, Lee said he wants to stay on until the country recovers from the crisis.

"Together with my older colleagues ... as well as the 4G ministers, I will see this through. I am determined to hand over Singapore intact and in good working order to the next team," he said in a PAP online rally -- comments that could be interpreted as hinting at a delay. The PAP's share of the vote, and specifically the numbers for Heng and other 4G hopefuls, will be a gauge of public confidence in the future leaders and could have bearing on the succession process.

After a campaign in which public rallies were banned as a virus precaution -- prompting some to cry foul about a process that was criticized as "already unfair" to the opposition -- the election organizers asked citizens to stagger their voting times as well.

Seniors, for instance, were encouraged to cast their ballots in the morning. Anyone with a fever or other symptoms was asked to vote in the last hour between 7 p.m. and 8 p.m. With the two-hour extension, officials said they would make arrangements for such voters to avoid mixing with others, and urged them to come after 9 p.m.

COVID patients, meanwhile, have had to sit this election out. 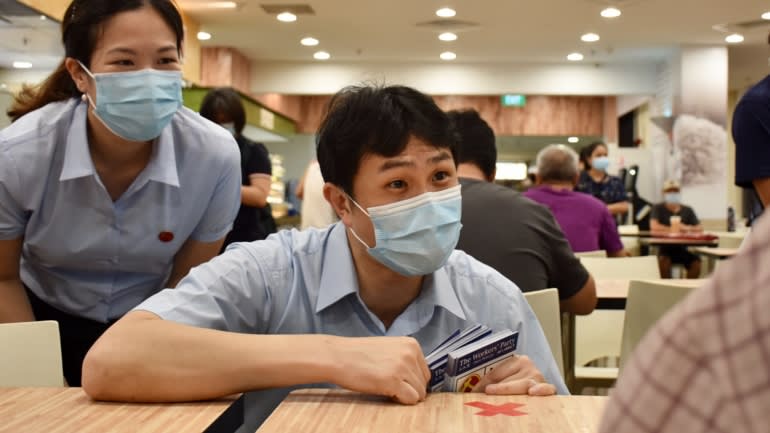 A total of 192 candidates are competing for the 93 seats.