SINGAPORE -- Singaporeans on Friday chose their next government in a general election overshadowed by the coronavirus pandemic and its dire economic consequences.

Voting was compulsory for citizens aged 21 or older, and some 2.65 million people were eligible. The Nikkei Asian Review followed the race and results late into the night.

Here's how it happened (Singapore time):

4:20 a.m. That's a wrap for the blog. Thanks to everyone for staying with us through the night. You can find more coverage here. 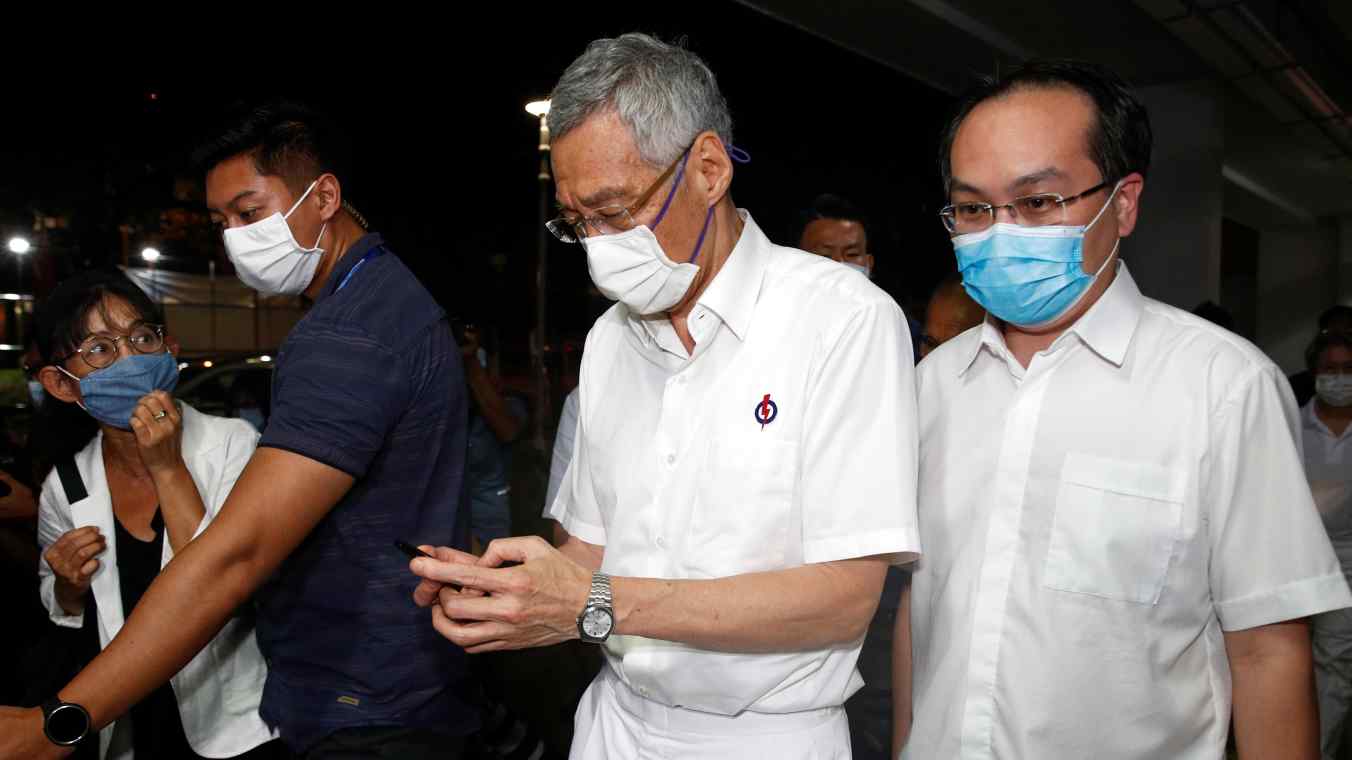 4:15 a.m. The PAP's vote share comes in at 61.2%, down from 69.9% in 2015. This is the party's second-worst performance on record, after the general election in 2011, when it garnered 60.1%. The party has also lost a cabinet member in Ng Chee Meng, minister in the Prime Minister's Office and head of Singapore's umbrella labor union, the National Trades Union Congress.

3:46 a.m. It's official: The PAP has won 83 seats, while the Workers' Party has taken an unprecedented 10. This is the first time an opposition group has won two group representation constituencies, where candidates run in groups and the winning team takes all seats.

3:23 a.m. Progress Singapore Party leader Tan Cheng Bock speaks after his party lost: "We may not have won the seats, but if you look at the level of support that is given to PSP candidates, average is about 40%. I am quite proud of that performance. I think this is the beginning of a new chapter for PSP. And I think the movement that I've created will grow. We are not deterred by this disappointment." Progress Singapore Party leader Tan Cheng Bock: He said his movement is "not deterred" by the loss.   © Reuters

3:05 a.m. The PAP has now secured 54 seats, ensuring it will form the next government. The next crucial number is 62 for a supermajority.

2:51 a.m. The PAP is up to 43 seats; the opposition still has zero official wins. The ruling party needs 47 seats for a simple majority.

2:45 a.m. Heng Swee Keat, the man tipped to become prime minister when Lee Hsien Loong retires, has won his seat -- though the Workers' Party gave his PAP contingent a run for its money. The PAP wins the five-seat East Coast district by a fairly tight margin of 53.41% to 46.59%.

2:30 a.m. The latest batch of results includes Prime Minister Lee Hsien Loong's district. The PAP's team wins with a 71.91% share of the vote there.

2:28 a.m. The official seat count is now 27-0 for the PAP. But narrower-than-expected margins in some districts are prompting local media to present this as anything but a resounding victory.

1:58 a.m. There's a buzz on the streets. Local TV footage shows Workers' Party supporters celebrating the sample numbers. When it comes to actual results, the PAP has won all seven seats announced so far.

1:40 a.m. "Unfortunately, we came up short," Singapore Democratic Party head Chee Soon Juan tells reporters after his party failed to take a lead in any constituency in the sample counts. "We are going to continue to try to see what we can begin to improve on, and then come back stronger." Chee sparked controversy during the campaign when he pressed the PAP on population growth and immigration.

1:25 a.m. The first official result is in. The PAP has won a seat in the Bukit Panjang district. The winners of other constituencies will be trickling in over the coming hours.

1:05 a.m. Now we wait for concrete results. But this has the makings of a big night for the Workers' Party. In an election in which many expected voters to play it safe, the opposition group is poised to win a record number of seats.

12:40 a.m. That's it for sample counts. If the results are close to the final numbers, the election would end with 83 seats for the PAP and 10 for the Workers' Party.

12:25 a.m. Opposition parties are making some noise. The Workers' Party, at least according to the samples, leads in two group representation constituencies -- where multiple candidates run together and the winner takes all seats. The WP also leads in one single-seat district. That would be good enough for 10 seats if the numbers hold. And it would be historic: An opposition party has never won more than a single GRC.

Meanwhile, the PAP is trying to hold off Tan Cheng Bock's Progress Singapore Party in the West Coast, with a sample count edge of 52% to 48%.

12:15 a.m. It's getting a little hot for Deputy Prime Minister Heng Swee Keat and his PAP contingent. The sample count in his East Coast constituency shows 54% for the PAP versus 46% for the Workers' Party -- significantly narrower than the 61% to 39% in the 2015 polls. Of course, regardless of the margin, all seats go to the winner.

12:02 a.m. The PAP is leading the sample counts, but in some districts the margins are less than comfortable for the ruling party. In Marine Parade, where the party lost former PM Goh Chok Tong to retirement, the sample gives the PAP 57% and the Workers' Party 43%. Last time around, the final results were 64% to 36%. In the Bukit Batok constituency, it's 57% for the PAP and 43% for the Singapore Democratic Party, versus 61% to 39% in a 2016 by-election.

11:45 p.m. The first sample counts are coming in. So far, they point to 10 seats for the PAP and zero for everyone else. These random sets of 100 votes have proved accurate in the past: In 2015, the final results in most districts were within a percentage point of the samples, according to local media outlet Today. Still, it's early.

11:30 p.m. Before numbers start flowing in, here's a look at how past Singaporean elections shook out. The opposition's seat total has never exceeded six. Will this time be different? 11:15 p.m. Ballot boxes have been arriving at counting centers. The first, rough indications of the results will be sample counts of 100 randomly chosen ballots from each station. These should come soon. Stay tuned.

10:45 p.m. The Progress Singapore Party's leader, Tan Cheng Bock, weighs in on the extension controversy. In a TV appearance, he calls it "highly irregular" and says it "compromised the integrity of the process." At least according to the government's gazette, however, it's within the laws of the land. In a note issued at 6:29 p.m., the Returning Officer made the call based on "powers conferred by section 39(3) of the Parliamentary Elections Act."

10:22 p.m. The Singapore Democratic Party, a smaller opposition group, has protested the extension of the voting hours, calling it "highly irregular." This probably won't be the last we hear about the late decision to allow an extra two hours of voting.

10:00 p.m. The polls have closed, and the counting is about to begin. We can expect the results to roll in over the next few hours. Stay with us.

8:26 p.m. While we wait, read our regular columnist William Pesek arguing that the Singapore election must offer a new vision for the economy. He writes that Prime Minister Lee Hsien Loong has been slow to remake the city into an innovative power, and that the election should be about how he plans to accelerate the economy's shift upmarket into biotechnology, energy, health care, logistics and software and make it a home for entrepreneurs.

7:09 p.m. Make that another two hours. The Elections Department has extended the voting hours until 10 p.m., from the original 8 p.m., due to lines at some polling stations.

"While the queue situation across most polling stations has improved, a small number continue to see long queues. This extension in hours will allow enough time for all voters to cast their votes," the department said in a statement.

7:00 p.m. Voters have one more hour to cast their ballots. As a coronavirus precaution, election organizers were asking anyone who feels feverish or unwell to vote during this final stretch, to minimize the risk to fellow citizens. Earlier in the day, virus safety measures contributed to long queues at polling stations.

Although the ruling People's Action Party is heavily favored to win, this election has generated several intriguing storylines. All eyes are on the performance of Deputy Prime Minister Heng Swee Keat in his East Coast constituency, as he is expected to replace Prime Minister Lee sometime in the next term. A record 40 female candidates are on the ballots. And opposition parties are mounting a spirited challenge despite warnings that they risk a "wipeout."

Then there is the question of how Lee Hsien Yang, the prime minister's estranged younger brother, might affect the outcome with his vocal backing of the Progress Singapore Party.