SINGAPORE -- The party platforms for Singapore's July 10 election are out, with the official campaign period set to begin on Tuesday and focus largely on post-pandemic recovery plans.

"This general election is not about me or any family disputes," the prime minister told a news conference on Monday, in response to his brother Lee Hsien Yang's emergence as a prominent Progress Singapore figure. "It's about Singapore's future at a grave moment in our history."

The PAP revealed its election manifesto on Saturday, when the premier described it as a plan to "overcome the crisis of a generation," referring to the coronavirus.

The city-state had recorded 43,459 COVID-19 infections as of Sunday -- 94% of them in crowded dormitories for migrant workers -- with 26 deaths. Business closures and other disruptions are expected to result in the worst economic contraction on record this year, with the government projecting a 4% to 7% decline in gross domestic product.

The PAP's manifesto hews closely to measures the government announced in recent months, such as creating 100,000 new job opportunities, establishing "green lane" arrangements for essential travel with other countries, and extra help for the hardest hit sectors like tourism.

As for the migrant workers, the PAP's manifesto promises to "build additional migrant worker housing with new operating models and improved standards." Opposition parties, meanwhile, are attempting to stand out with pandemic responses of their own. The Workers' Party, which draws support from blue-collar Singaporeans, on Sunday released a 39-page plan that devotes the first eight pages to COVID-19 policies.

One is to develop domestic manufacturing capabilities for masks, ventilators and other critical supplies. "The government should be given powers to order manufacturers to divert R&D and production resources for national emergencies," the party suggests.

For the migrants, the party proposes creating "a dedicated statutory board" to oversee and enforce working and living standards. "If COVID-19 has told us anything, it is that Singapore will have to deal with challenges which are new, unexpected and even sudden," Workers' Party Chair Sylvia Lim told reporters on Sunday. "No single party, however powerful, can find answers within itself."

The Workers' Party also advocates expanding residents' safety net with a national minimum wage and unemployment benefits, while opposing the government's plan to raise the goods and services tax to 9%, from the current 7%, by 2025.

The Progress Singapore Party, led by PAP veteran Tan Cheng Bock, on Monday followed with a platform promising stronger support for small and midsize enterprises as a post-COVID recovery strategy. This would include assistance with overseas expansion and operating cost reductions.

Besides the pandemic, opposition parties have zeroed in on the PAP government's controversial "fake news" law. The legislation -- officially called the Protection from Online Falsehoods and Manipulation Act, or POFMA -- took effect last October.

The law was "supposedly aimed at combating disinformation, but instead is used against dissidents and critical voices," ASEAN Parliamentarians for Human Rights argued in a report on the Singapore election this month. 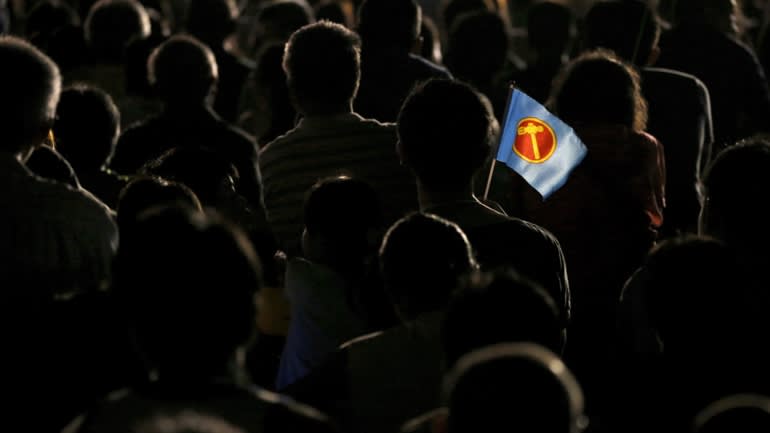 A Workers' Party event in 2015: Large rallies, a staple of opposition campaigning in the past, are banned this year due to the coronavirus.   © Reuters

The Workers' Party said "courts must be required to approve government POFMA directives on substantive grounds," pointing out that the current law enables ministers to be the first arbiter of what can be publicly said as true.

Progress Singapore raised "freedom of speech and expression" as a priority in its manifesto, calling for a review of the law.

Another opposition group, the Singapore People's Party, is proposing a "Freedom of Information Act," saying that fake news would be debunked if the public has unhindered access to information.

The ruling PAP's manifesto does not mention the fake news law. But the party last week revealed that Alvin Tan, a former Facebook executive, is among its new candidates. Tan had argued against the law while representing the U.S. social media giant as head of public policy in Southeast Asia.

"We do not believe that legislation is the best approach to addressing the issue," Tan said at a public hearing in March 2018.

Singapore had until next April to hold the general election, but Prime Minister Lee announced the dissolution of parliament last Tuesday, days after the government allowed more businesses to reopen from the coronavirus shutdown.

All parties must formally nominate their candidates on Tuesday. A total of 93 seats in the unicameral legislature will be contested this time, spanning 31 constituencies. Several other opposition parties are expected to field candidates as well.