SINGAPORE -- Progress Singapore Party chief Tan Cheng Bock was making the rounds at a food court in southern Singapore around 8 a.m. Saturday to speak with elderly people and families about his party's platform.

Behind him the entire time was Leong Mun Wai, one of the party's candidates in the country's general election set for Friday.

Leong is one of several highly educated, accomplished candidates joining the political opposition and representing a major shift in its priorities. These groups no longer simply oppose the ruling People's Action Party, which is all but guaranteed to win the upcoming vote. Instead, they wish to spark a constructive, responsible policy discourse that would benefit the entire nation.

At first glance, Leong appears a better fit for the conservative ruling party. After studying at Tokyo's Hitotsubashi University and then at London Business School, he spent many years as a manager at a major Singaporean financial institution. Leong now runs his own asset management company.

But "Singapore has pursued the wrong policies this last 20 years," he said when asked about his decision to campaign under the PSP banner. "I decided to run for office for my grandchildren and the future."

His party's central promises include curbing Singapore's dependence on foreign workers, a stance that resonates with the city-state's low-income and unemployed voters.

Jamus Lim of the Workers' Party, the only opposition group that held seats in the dissolved parliament, is another candidate gaining momentum. The Harvard-educated economics professor wowed voters with his performance in a televised debate Wednesday.

Foreign Minister Vivian Balakrishnan, representing the People's Action Party at the event, downplayed the Workers' Party platform by highlighting its similarities to that of the PAP. But Lim stressed that the election was about ensuring lively debate, not just during the race but also in parliament.

"What we're trying to deny [the ruling party] is a blank check," Lim said. "If you believe in the essence of a democratic, modern society for the 21st century, then we ask that you make your vote count." 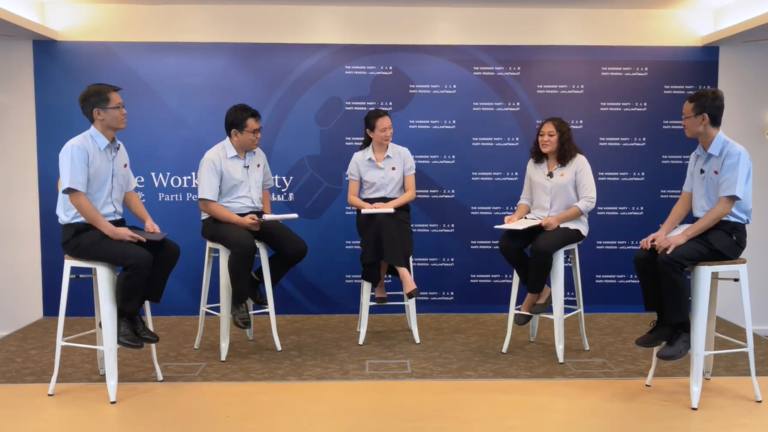 The Workers' Party is aggressive promoting its younger candidates, including through videos posted on social media. (Image from Workers' Party Facebook account)

The rise of candidates like Leong and Lim coincides with a growing focus among opposition parties on advancing political discourse. Leong advocates for gradual changes, while Lim says he will not oppose policy for the sake of opposing the PAP.

The Workers' Party advocates many of the same responses to the coronavirus as the PAP-controlled government, such as increased testing and the use of cutting-edge technology to trace infection routes.

Despite a population of just 5.7 million, including foreign residents, Singapore serves as a financial and trade hub for Southeast Asia. Its per-capita gross domestic product far surpasses that of many larger economies, such as Japan.

The PAP has maintained an iron grip on power since Singapore became independent in 1965. But a growing portion of voters sees the need for a stronger opposition so that different groups can be represented in the national discourse.

The PAP won the 2011 election with 60.1% of the vote, a figure that rebounded to 69.9% in the following election four years later. But the rise of highly educated opposition candidates could draw more mainstream votes this time for the 93 parliamentary seats.

It remains to be seen whether the opposition can improve on the six seats won in 2015. Many constituencies are fought among teams consisting of four or five members of the same party, with the winning party securing all seats representing that district. This system tends to favor the PAP, which has superior organizational abilities, and to which most sitting lawmakers belong.

In light of the coronavirus outbreak, candidates are banned from holding large-scale rallies, on which opposition parties relied heavily in the past. With many fresh faces on both the ruling and opposition slates this year, the outcome likely will depend on how well each side uses Facebook, Twitter and other social media platforms to win over younger and more tech-savvy voters.