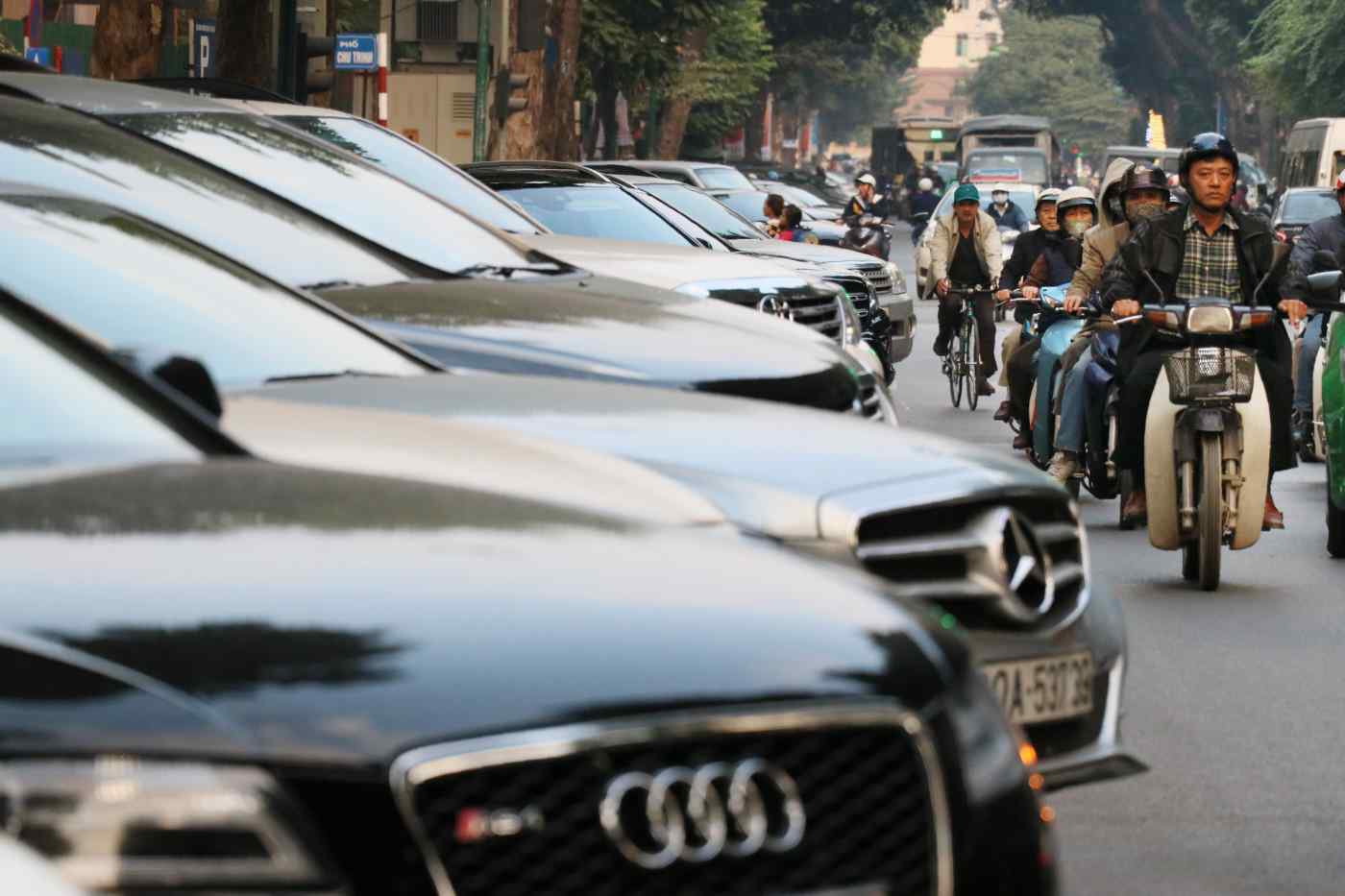 HANOI Rapid economic development is widening the gap between Vietnam's haves and have-nots. This is sowing discontent at a time when, thanks to the spread of smartphones and social media, citizens are airing their grievances and holding leaders accountable like never before.

The government launched its fabled Doi Moi reforms in the 1980s with the goal of creating a "socialist-oriented market economy." These measures paved the way for the fast growth the Southeast Asian country is experiencing today.

But while Vietnam still calls itself a socialist republic, ostensibly committed to equality, there is no hiding the gulf that separates senior Communist Party officials and company founders from poor farmers and laborers. Frustration is fueling calls for democratization, the correction of income disparities and other reforms.

Traditionally, the government has sought to control public opinion through state-run media and by stifling dissent. Now it is realizing that the social media genie is nigh impossible to put back in the bottle -- and that it had best listen to its restless citizens.

A sign of the times came last August, when Prime Minister Nguyen Xuan Phuc offered an apology after an uproar on social networks.

A week earlier, Phuc had visited the city of Hoi An, a World Heritage site, to promote tourism. He had strolled into a pedestrians-only area while his motorcade crept along behind. Onlookers snapped photos and posted them online. In less than an hour, thousands had shared the pictures on Facebook and other sites, criticizing Phuc for "disrespecting" the historic location. 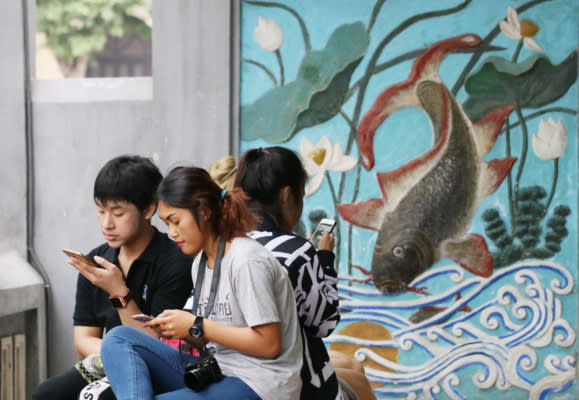 Young Vietnamese peer into their smartphones in Hanoi. (Photo by Shinya Sawai)

Facebook is used by 40 million people in Vietnam. Other services, such as homegrown messaging app Zalo, bring the country's total number of social network users to 50 million -- more than half the population. Many are not shy about expressing their opinions on everything from territorial disputes in the South China Sea to environmental damage allegedly caused by a steel plant owned by Taiwan's Formosa Plastics in the central province of Ha Tinh. As these opinions circulate, they have a way of shaping broader public sentiment.

On Nov. 22, the government canceled plans to build two nuclear power plants in the southern province of Ninh Thuan. Japan and Russia had been slated to build the facilities, which were scheduled to start operating in 2028. While high construction costs -- to the tune of $27 billion -- were cited as the reason for the cancellation, the authorities surely heard the online chorus of disapproval. Many social media users expressed concern about the project in light of the 2011 disaster at Japan's Fukushima Daiichi nuclear power station.

You might say the social media commentariat is speaking for those who feel they cannot speak out themselves. Nguyen Dai, a 55-year-old grape farmer living close to the construction site, said, "I was not allowed to oppose the government project and now I feel relieved because it has been canceled."

While former Prime Minister Nguyen Tan Dung and other leaders have, at times, called for a clampdown on social networks, the government is coming to grips with the fact that its old media strategy is no longer practical. Some officials are even embracing the new reality.

Health Minister Nguyen Thi Kim Tien in March 2015 became the first Vietnamese cabinet member to establish a presence on Facebook. She now has nearly 400,000 likes, and she makes a point of replying to complaints about hospitals, doctors and the health care system in general.

UNCONVINCING NUMBERS People are bound to grumble when they feel left behind by economic development, while others reap the rewards.

Nguyen Thi Loi, a 39-year-old farmer, carries her fruits and vegetables on a pole in Hanoi, where she hawks them from early morning to late evening. She earns no more than 200,000 dong ($8.81) a day. She cannot help but notice the Porsches, Mercedes-Benzes and other luxury cars parked in the government office district.

Farmers in Vietnam earn 1.4 million dong per month on average, according to the Institute of Policy and Strategy for Agriculture and Rural Development. That is less than half the minimum wage in Hanoi and Ho Chi Minh City.

"My life has become easier than in the past," Loi said, "but it's still tough because I have three children. I envy rich people."

The government says the president, prime minister and other leaders take home monthly base pay of $660 to $700. Many see this as a ruse; the gap between the ruling class and the rank and file is actually much greater.

Leaders "must earn much more," said a 37-year-old man working for an information technology company.

UNFULFILLED YOUTH Discontent is simmering among younger generations as well.

Nguyen Van Minh, who is in his 20s, works at a Samsung Electronics smartphone assembly plant in the northeastern province of Thai Nguyen. This is not what he had in mind when he was studying economics at university. He thought he would end up in the vanguard of business.

Some 4.42 million students graduated from Vietnamese universities in 2015, a 1.4-fold increase from 2010. But as Vietnam's economy is still developing, the graduates are finding it difficult to land jobs that match their skill sets. Multinationals, which are attracted to Vietnam's low labor costs, are often willing to hire graduates like Minh -- as manual laborers, not executive candidates.

The word on the street is that getting a good job often requires a bribe. They say it takes roughly $10,000 to become a traffic officer, and about $30,000 to join Vietnam Airlines. That kind of cash is hard to come by when the average Vietnamese worker makes an average of $5,000 a year. But an engineer in Hanoi said those who do scrape up the money to land such jobs can recoup their investment in a year.

In any case, as of last March, 192,500 university graduates were out of work, accounting for nearly 20% of Vietnam's unemployed, the General Statistics Office said. The number of plant workers with university degrees continues to increase.

Universities themselves are not free of dubious dealings. A 21-year-old student at a prestigious college in Hanoi admitted that she pays her professors for the credits she needs. Such practices may clash with the egalitarian principles of communism, but they persist all the same.

The late Ho Chi Minh, communist Vietnam's founding father, preached the importance of national independence and freedom, as well as happiness for all. The Doi Moi reforms have brought the country much closer to economic freedom. But with the rising tide of resentment on social media, the leadership cannot afford to ignore another part of the equation: closing gaps in income and opportunity.