SEOUL   A mood of political expectation has taken hold in South Korea since the turn of the year. The outcome of a general election on April 13 will not only set the direction of President Park Geun-hye's economic and foreign policy, it will also greatly affect the next presidential contest, slated for late 2017, in which Park's successor will be chosen.

The National Assembly, South Korea's parliament, is a unicameral legislature with 300 members. Every four years, 246 members are elected to single-seat constituencies and 54 are chosen by proportional representation. Thus, races for single-seat constituencies carry far greater weight than those for proportional representation seats.

As of Jan. 4, the conservative Saenuri (New Frontier) Party had 156 National Assembly seats, while the reformist opposition, Minjoo Party of Korea (formerly New Politics Alliance for Democracy), holds 119 seats. The two largest parties control more than 90% of the seats in parliament. 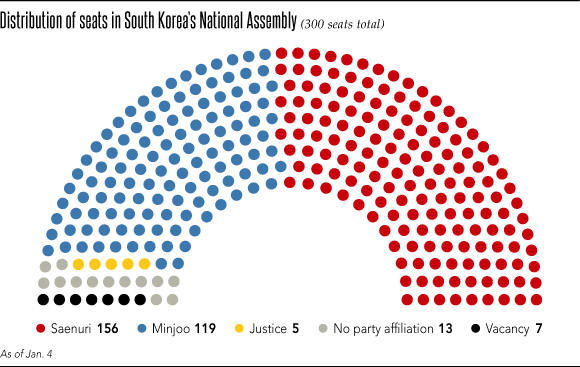 Pocketbook issues are likely to dominate the campaign. The South Korean economy is struggling to grow as exports and domestic demand stagnate. With youth unemployment an especially serious problem, job creation is the biggest challenge. Park's government is pushing labor reform legislation that makes it easier for companies to hire and fire workers, and introducing a system that allows wages to be cut when workers reach a certain age, among other measures. Opposition parties gave a thumbs-down to the proposals, saying they will encourage the employment of nonregular workers. The prospects for passage of the legislation are unclear.

Other bills related to economic policy, such as those dealing with the service industry and tourism, are also aimed at ginning up growth. Park has repeatedly urged quick passage of the bills in cabinet meetings and elsewhere. But opposition parties, which see them as benefiting big businesses, have dug in their heels.

An opinion poll in late 2015 showed Saenuri is far more popular than the  Minjoo Party. If the ruling party wins in the general election, it would give a boost to Park's economic reform efforts. But whether she can push through her agenda unimpeded will depend on Saenuri winning a two-thirds majority in the assembly. South Korean law prohibits ramming a bill through parliament unless at least two-thirds of members vote for it.

If Saenuri does secure two-thirds or more of the seats in the general election, it will be able to push for changes aggressively. If it loses, opposition parties will become more confrontational toward Park's government, continuing the deadlock.

TRIAL RUN   The general election will also serve as an audition for candidates in the next presidential election. Leaders who succeed in uniting their parties and sending many members to the assembly in April have a good shot at becoming presidential candidates. Those who do not are typically forced to abandon any such ambitions. The performance of opposition parties in the general election is another focus of attention. With Ahn Cheol-soo, a former co-leader of the Minjoo Party, having left the party in December to set up a new one, the parliamentary election has become a three-way contest. But perhaps only briefly: Ahn and  Minjoo Party leader Moon Jae-in will battle it out in the general election; the survivor is likely to become a joint opposition candidate in the presidential election.

A South Korean president serves a single five-year term. If pro-Park lawmakers in the ruling party do well in the general election, she will maintain her influence and find it easier to make big foreign and domestic policy decisions. Park has a strong regional power base and overwhelming support among older conservative voters. Some observers believe she will have a big say in naming her successor.

But if she chooses poorly among potential Saenuri candidates and they make a poor showing, Park will become a lame duck with nearly two years left in office. Although the president will not be on the ballot, the stakes for Park are high.