A vendor smokes beside his cigarette stall along a busy street in Manila.   © Reuters

BANGKOK/MANILA/SINGAPORE -- Once a smoker's paradise, Southeast Asia has been turning up the heat on its tobacco-addicted citizens with regulations and taxes to encourage them to kick their habit.

Thailand's National Tobacco Products Control Committee approved new restrictions in November, making it the first country in the region to force manufacturers to use packaging unadorned with logos, colors or stylish fonts regarded as marketing. Brand names will be displayed in small, plain white type against a black background, and the gruesome photos of people ravaged by smoking-related diseases will remain, according to a dummy pack shown by the government.

Chayanan Sitthiboot, director of the Tobacco Consumption Control Office, said cigarette manufacturers have one year to comply with the new regulations.

Another measure enacted in November prohibits people from smoking inside public buildings and within 5 meters of their entrances. The regulation comes into force in 90 days, with violators facing fines of 5,000 baht ($150).

Many Thai smokers seem nonchalant about the new measures. Sarunyu Mahattanarak, a social smoker, believes the government is not all that serious about cracking down. A Korean businesswoman who has worked in Thailand for over 10 years said that the government measures won't make her quit, though she is clearly aware of efforts worldwide to stigmatize the habit.

After the U.S. and Europe began their antismoking crusades, manufacturers turned their attention to Southeast Asia. Data from the World Health Organization suggests the number of smokers in the Americas -- North America, Mexico, the English-speaking Caribbean, Central America and South America -- will decrease to 110 million in 2025 from 169 million in 2000. Over the same period, smokers in Europe will decrease to 182 million from 247 million. However, smokers in Southeast Asia are projected to marginally rise to 240 million from 239 million. 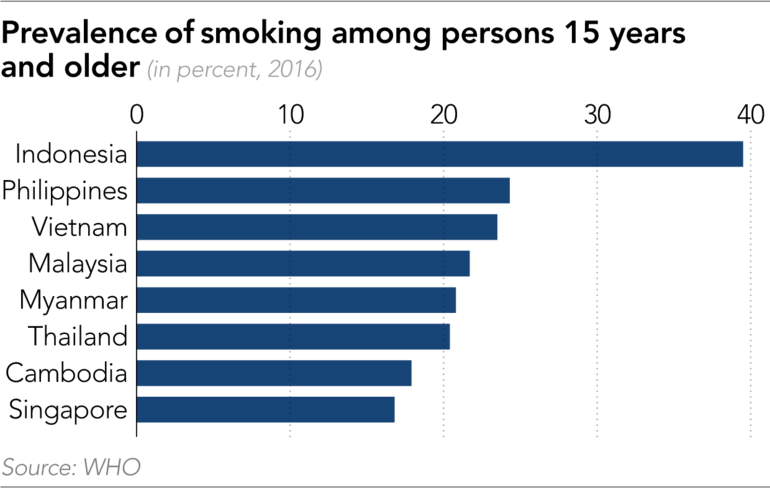 The organization insisted that tobacco users who die prematurely deprive their families of income and raise the cost of health care, ultimately hindering a country's economic development.

Meanwhile, fresh from hiking tobacco excise taxes in 2018, the Philippines is looking to again jack up taxes on cigarettes to bankroll a health care program.

Taxes on cigarettes increased by 5 pesos to 35 pesos ($0.66) per pack in 2018 under President Rodrigo Duterte's first tax reform program, which will raise the levy to 40 pesos per pack by 2022, along with a 4% annual increase beginning in 2023. But lawmakers allied with Duterte want even higher taxes. The finance department is backing a bill that will bring taxes to 60 pesos per pack, and increase it by 9% annually.

The measure was previously set to go into effect in 2019, but deliberations have been sidelined partly by preparations for the May 2019 midterm elections. Discussions could resume in the second half of 2019. "Our revenues have to keep on going up because we are supporting a lot of people who are getting sick from smoking," Finance Secretary Carlos Dominguez said early this month.

Duterte has banned smoking in public places and proposed a multipronged tax reform program as he aims to upgrade a universal health care bill and fund a $160 billion infrastructure program. The finance department said the government has collected around 100 billion pesos from tobacco excise taxes since levies were raised in 2012, but economic losses from the leading four smoking-related diseases is estimated at 210 billion pesos annually.

Singapore and Malaysia are also ramping up antismoking efforts. Both are expanding smoke-free zones from Jan. 1 for the sake of nonsmokers and also to encourage smokers to stop.

Orchard Road, Singapore's main shopping street, will become smoke-free in 2019 while smoking corners in eating establishments near the area will be eliminated. However, smokers will still be able to puff away in designated areas.

Operators and managers of establishments where smoking is prohibited are also "required by law to request smokers to cease smoking or direct them to the nearest designated smoking area," said Singapore's National Environment Agency.

In 2018, the city-state increased the excise duty on all tobacco products by 10% and banned e-cigarettes and other vaporizers. The government hopes to reduce the smoking rate to below 10% by 2020.

Similarly, Malaysia is banning smoking in all eateries nationwide, including coffee shops. Establishments that do not enforce the ban will be fined 2,500 ringgit, while people who smoke in prohibited areas will be fined 10,000 ringgit. "No doubt, smokers will say they have the right to smoke, but nonsmokers also have the right to have smoke-free areas," said Malaysia's Deputy Health Minister Lee Boon Chye.