Space: The next frontier for US-China rivalry SINGAPORE -- With the U.S. government pledging to resume manned missions to the Moon, and eventually send a mission to Mars, Cold War-style competition over space exploration is re-emerging -- between China and the U.S. this time.

China hopes to make its first manned lunar landing within 15 years, around six decades after the last American walked on the moon in 1972.

But China is not as far behind as those dates suggest. It hopes to make the first-ever landing on the dark side of the Moon by the end of 2018. This feat eluded the U.S. and Soviet Union during the heyday of their Space Race from the late 1950s to the mid-1970s.

Other Asian counties, notably Japan and India, have their own space programs. But China appears to be leading the way.

In another first, China launched the world's first quantum satellite in mid-2017. The technology is said to provide unbreakable secret satellite communications channels, giving Beijing a one-off advantage over the much more extensive U.S. satellite network.

On Oct. 5, 2017, U.S. Vice President Mike Pence said Russia and China are pursuing "a full range of anti-satellite technology to reduce U.S. military effectiveness." The two countries are "increasingly considering attacks against satellite systems as part of their future warfare doctrine," he added.

No country has destroyed another's satellite. But hundreds of satellites are orbiting the Earth, upon which much of communications and navigation technology depend, including those used by military forces. Thus, space is likely to be a front line in any future conflict between great powers. 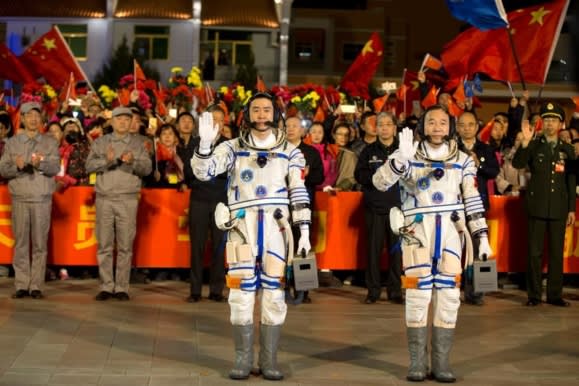 Chinese astronauts wave prior the launch of the Shenzhou-11 spacecraft in 2016.   © Reuters

In Australia, the University of Adelaide law school is working on a manual to clarify existing international law as it applies to military space operations. A range of legal, military and scientific experts from Europe, North America, China and Singapore are involved in drafting the manual.

Named after a remote Australian military and space research center, the The Woomera Manual will draw on precedents set by manuals that helped frame laws around naval conflict and cyber warfare, among others.

The drafters hope that countries will give feedback on the draft and agree on legal principles around space conflict. There have been five international treaties concerning space exploration since 1967.

However, these are based on the premise that operations in space are for peaceful purposes. The drafters of the Woomera Manual say they do not "expressly address the initiation and conduct of hostilities involving outer space," and that little state practice exists on the subject.

"The manual is an attempt to clarify existing law as it applies to space," said Laura Grego, senior scientist at the Union of Concerned Scientists, and a contributor to the Woomera Manual.

The prospect of mining of asteroids means that space exploration is increasingly seen as a commercial venture as much as a scientific or military one, posing more potential legal quandaries.

In November 2017, Chinese state media reported that the country aims to develop nuclear-powered space shuttles by 2040. It hopes to then mine asteroids and build solar power plants in space.

On April 24, the U.S. House of Representatives passed legislation aimed at speeding up licensing for U.S. businesses involved in satellite technology.

In 2015, the U.S. said American businesses that managed to extract raw materials from outer space could do so commercially -- something critics said contradicted earlier international treaties on space exploration. A concept portrayal of China's planned Mars rover and lander, released in 2016.   © Reuters

According to Planetary Resources, a business set up by former NASA scientists, tapping asteroids for water to supply deep-space missions and using robots to drill for extraterrestrial mining is about a decade away.

There are about 16,000 asteroids of various sizes sharing a similar orbit to the Earth, meaning, in theory, there should be ample space minerals for everyone.

But, with the possibility that space will become a lucrative commercial frontier, comes the likelihood of inter-state rivalries over resources.

On Earth, countries are already asserting their claims to the contested, resource-rich Arctic, which lacks clear boundaries over who owns what. Recent decades have seen wars fought over natural resources, suggesting that peaceful competition for resources in space is not assured.

"There seems to be a lot of material, but some of it will be easier and more economical to retrieve," said Grego, discussing the technical challenges of mining precious metals on asteroids.