MANILA -- A referendum to create a Muslim region with greater autonomy in the conflict-ridden southern Philippine islands comes with no guarantee of peace.

About 2 million voters in the Autonomous Region in Muslim Mindanao and two cities will vote on Monday on whether to establish a region with more than 50 exclusive powers, including a Sharia-based justice system and Islamic financing. A separate plebiscite for adjacent towns has been scheduled on Feb. 6.

Top officials of the 30,000 strong Moro Islamic Liberation Front are expected to head the government of the new Bangsamoro Autonomous Region in Muslim Mindanao after the anticipated "yes" vote. The rebel group now sees a chance for peace after decades of conflict that have claimed around 100,000 lives, displaced millions and left large areas impoverished.

"We are very confident that the yes votes will prevail overwhelmingly," Ghazali Jaafar, the front's vice chairman for political affairs, told the Nikkei Asian Review. "Let us forget our differences. This is a very historic opportunity for all of us to make change."

But a former peace adviser warned the Moro rebels and the national government that complacency could derail peace efforts.

Teresita Quintos-Deles, the presidential adviser who brokered a final peace agreement with the rebels in 2014, said President Rodrigo Duterte should be able to immediately appoint an 80-person transition authority to avoid a power vacuum. This, Deles said, depends on swiftly appointing the region's leader.

"Unfortunately, if you look at the track record of the president signing appointment papers, he takes time, especially if he doesn't know the person," she said.

The law's ratification would dissolve the existing regional government.and the transition authority would be formed to lead Bangsamoro until the 2022 elections. Otherwise, a caretaker government with vague powers will govern the region. 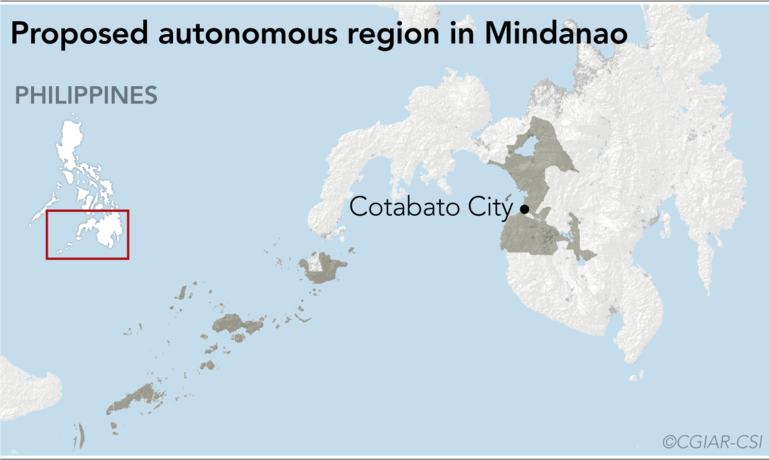 Another concern is the rounding up of firearms. Under the peace deal, the rebels were to have decommissioned a third of their weapons once voters have approved the new government.

Splinter groups who have broken away from the Moro rebels could become the biggest spoilers of the peace process. The Bangsamoro Islamic Freedom Fighters, for instance, said it will continue its armed struggle and will not take part in the plebiscite. Other militants, with support from foreign extremists, want to turn the island into an Islamic caliphate.

In May 2017, Islamic State-inspired militants tried to establish an East Asia caliphate in Marawi City, leaving the predominantly Muslim city in ruins. More than a thousand people died during the five-month siege before the city was recaptured by government troops.

The Philippine Congress in December backed Duterte's demand to extend martial law by another year in Mindanao -- the third extension since Duterte imposed martial law on the island after the defeat of the militants in Marawi.

Moro's Jaafar said the front will reach out to other groups to persuade them to join the peace process.

"I believe we have to have dialogue with them to convince them to join the Bangsamoro government," Jaafar said.