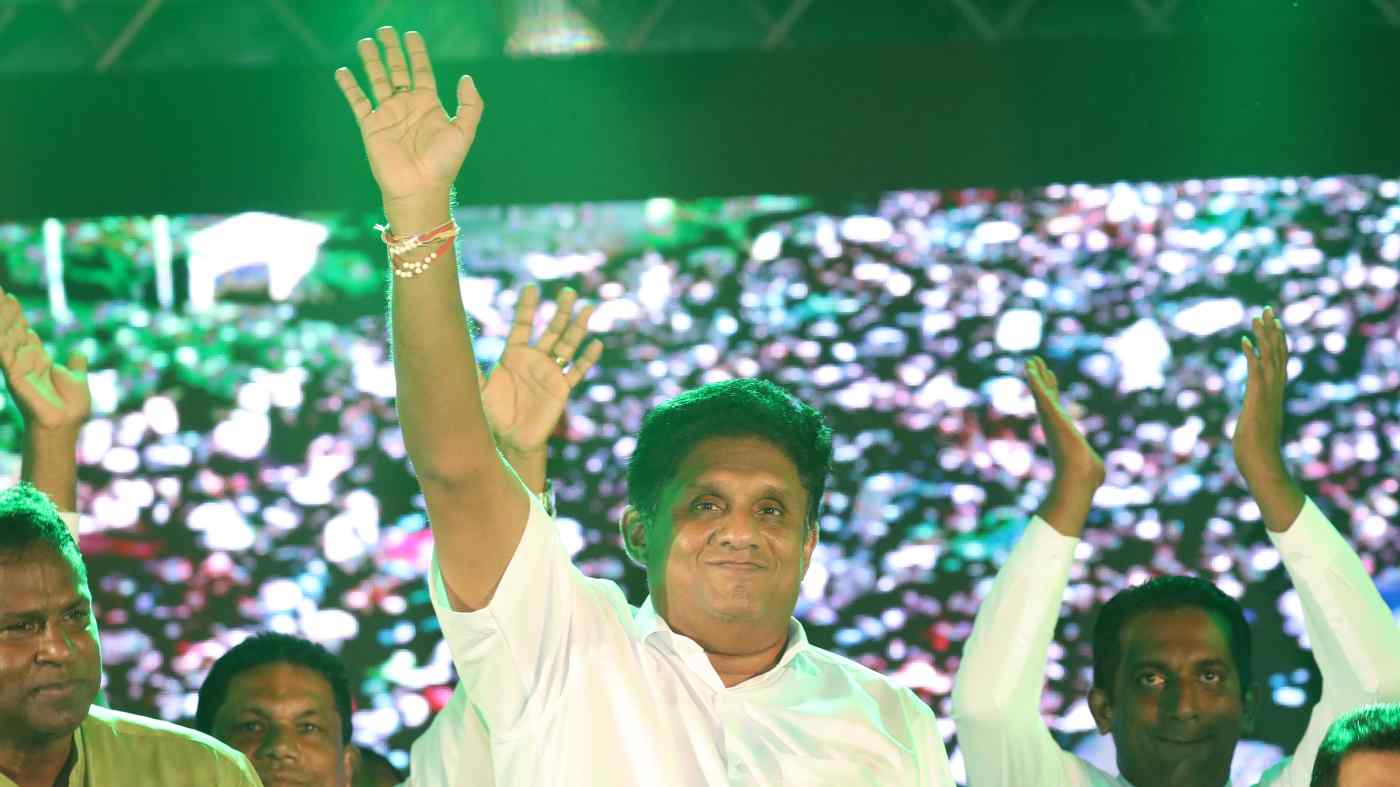 COLOMBO -- As campaigning enters the final stretch in Sri Lanka's Nov. 16 presidential polls, Sajith Premadasa, the leading political moderate in the fray, is staking his hopes for victory on the country's first-time voters.

He aims to garner support from those who came of age after the strategically located South Asian island ended a decade of increasingly authoritarian rule.

The youth vote accounts for 1.5 million ballots out of the country's 16 million registered voters. Analysts include them in the decisive "undecided voter" group, now an estimated 20% of the ballot. Others in this demographic are educated urban voters and large swathes of the linguistic and religious minorities in the predominantly Sinhala-Buddhist country.

To tap the youth vote, Premadasa, a cabinet minister in the incumbent government and New Democratic Front candidate, is turning to social media. On Thursday afternoon, the 52-year-old delivered his latest missive through a YouTube spot, addressing concerns among youths over the country's corrupt political culture.

Sri Lanka "needs a cleanup," Premadasa said. But not by "sacrificing our cherished democracy and individual freedoms ... It is time to go beyond party politics, the politics of greed."

By stressing democracy and individual freedoms, Premadasa -- a parliamentarian since 1993 -- is burnishing his credentials as a moderate to capitalize on democratic fervor that was unleashed after the last presidential elections in 2015. That watershed poll led to the shock defeat of former President Mahinda Rajapaksa, whose term was noted for its pro-China posture and iron-fisted rule. Mahinda's younger brother Gotabaya, a hawkish member of the authoritarian former government, is facing off against Premadasa. He is the choice of Sri Lanka Podujana Peramuna, a new party that is an arm of the Rajapakasas political machine, the country's most influential political clan.

Having emerged as a formidable opponent, Gotabaya is relying on his image as a tough-talking former defense secretary to court the strict law-and-order vote.

"Young voters have gone from initially being apathetic and being critical of the establishment to now realizing they have to choose between the two main candidates," said Roel Raymond, senior editor of Roar, an online news platform. "Social media is swaying opinion."

Analysts are hardly surprised by the tactics. The candidates are merely using social media to sway a tech savvy electorate, mirroring strategies used during recent campaigns in Thailand, Malaysia and other Asian nations. Internet and social media usage in Sri Lanka has risen to 35% of the population in 2019, up from 25% in 2015, the year of the last presidential election, according Nalaka Gunewardene, who frequently comments on the relatively new media.

Local elections monitors are watching how social media is changing the media landscape during elections cycles. They believe it may be helping to broaden political discourse in one of Asia's oldest democracies, where regular elections have been held since 1931 when the country was still a British colony.

"Social media now has a bigger role than in the last presidential elections," said Rohana Hettiarchchi, executive director of Peoples Action for Free and Fair Election, a nonprofit election watchdog. "Every move is commented on [Facebook]. The political culture cannot do without it." 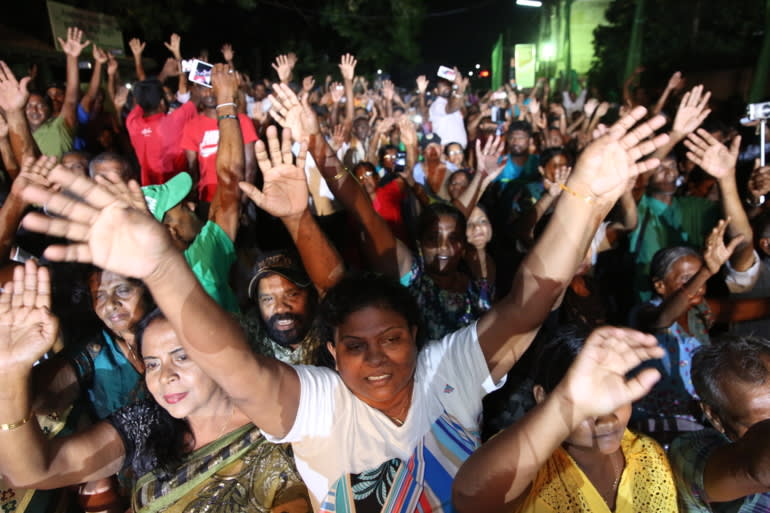 Supporters wave hands at at a rally of presidential candidate Sajith Premadasa in Ja-Ela, Sri Lanka. (Photo by Rie Ishii)

According to reports, Sri Lanka has six million Facebook users, of which one million are active users. Not surprisingly, executives from the U.S. media giant have been working with a group of Sri Lankans who are part of a "My First Vote" organization that is encouraging youth to vote in the upcoming polls.

But Facebook is now under pressure to guard its platform against "fake news" and hate speech, both of which have erupted in Sri Lanka. This has forced the government to temporarily ban Facebook to avoid ethnic clashes.

Political insiders say other new media platforms are shaping political sentiment as well, such as WhatsApp in urban areas and Viber in the countryside. "Twitter has become the most important platform," said Milinda Rajapaksha, a spokesman for the SLPP. "The Twitter conversation shapes [Facebook] and then enters family conversation."

Analysts note that the political discussions that have emerged on social media over the last four years are one measure of how far the democratic processes have progressed. And with over 27 million mobile phones in circulation among a population of 21.6 million, the freewheeling discourse is likely to grow.

Campaign teams are mapping out strategies to tap this voter base, where the Rajapaksas enjoy a wide following among the majority Sinhalese-Buddhists, who account for 70% of the population. To overcome that, Premadasa is wooing the country's Tamil, Muslim and Catholic minorities with a message of inclusiveness.

In street-side tea shops from Kurunegala in the west to Kalmunai in the east, the winds of change are blowing. "Young voters and first time voters will not follow their parents' choice," said Sujeewa Priyadarshini, a parent in Kurunegala. "They will break with this family tradition."