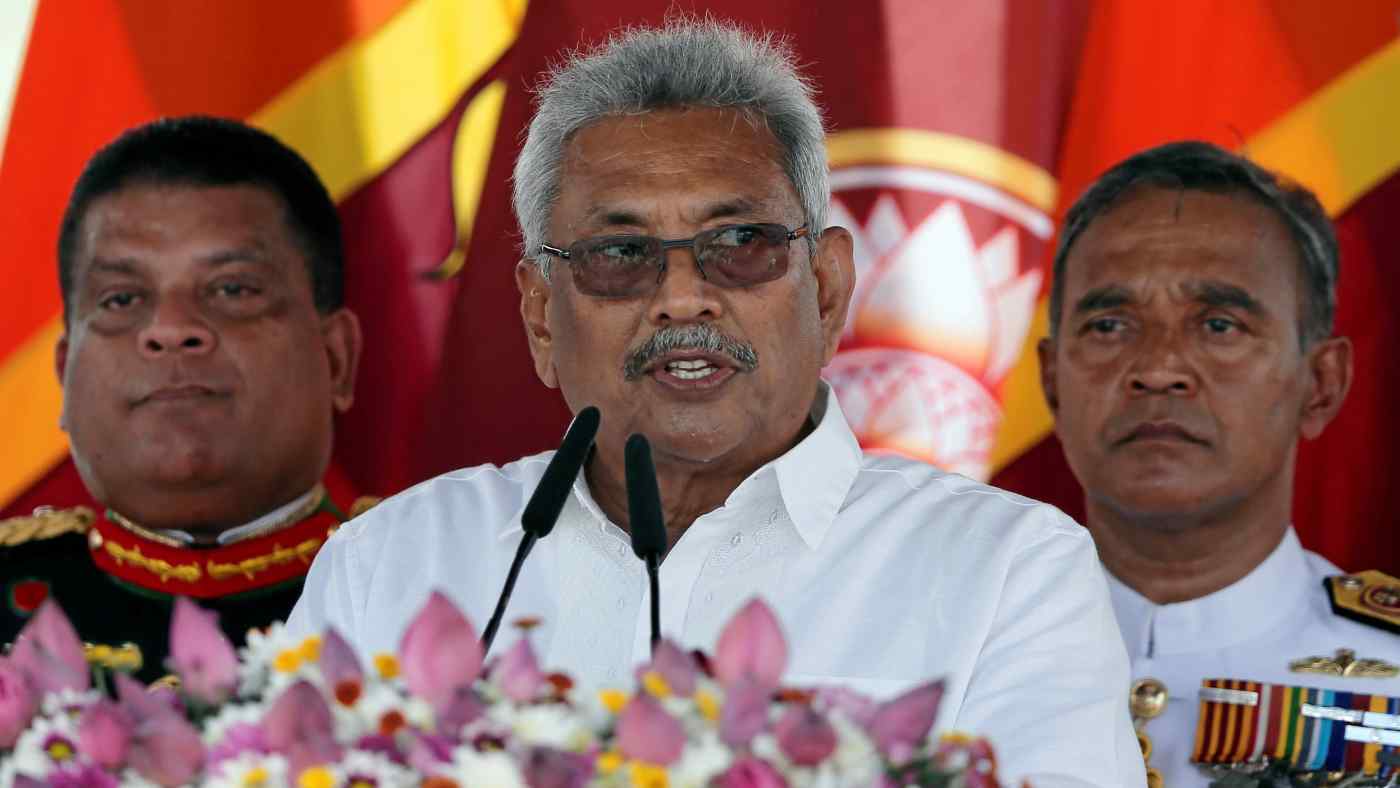 COLOMBO -- Gotabaya Rajapaksa's siblings call him the "Terminator," and the 70-year-old cultivated that macho image to win Sri Lanka's presidential election on Saturday.

Rajapaksa took 52.2% of the ballots cast to become the island's seventh president -- the result putting his family, Sri Lanka's most influential political clan, back in power after a hiatus of nearly five years.

The tally affirmed a shift in the national mood away from the democratic openness of his predecessor, Maithripala Sirisena, who sought to move away from Chinese influence.

Rajapaksa's win hails a new period of strongman rule, closer ties with Beijing, and a turn toward tackling issues causing discontent among the Sinhala-Buddhist majority, such as economic insecurity in the rural heartlands.

Rajapaksa is the second member of his family to reach Sri Lanka's highest office. His elder brother, Mahinda, was president for a decade through 2015. The younger Rajapaksa scored heavily in constituencies where the country's Sinhalese-Buddhists, who account for 70% of the population, are concentrated.

This enabled him to win in a landslide, with an 11 percentage point edge over his rival, by winning 6.9 million of the 13.5 million votes cast in a poll that saw an impressive 83.7% turnout.

Rajapaksa's win was made easier by self-inflicted wounds, such as open clashes between President Sirisena and Prime Minister Ranil Wickremesinghe, of the pro-Western coalition government that succeeded Mahinda. Deep divisions over a bond scam involving the central bank and a plan to upgrade the Colombo port, among other issues, led to infighting, policy uncertainty and a slump in economic growth.

The president-elect was quick to acknowledge the significance of this triumph on a pan-Sinhalese-Buddhist wave by heading to Anuradhapura, an ancient capital of Sinhalese kings, for his swearing in on Monday.

Observers say that Rajapaksa's victory stemmed from Sinhalese majoritarian overtures, and amount to a watershed moment in the strategically located South Asian island. It breaks with a tradition that governments need to depend on support of the country's linguistic and religious minorities -- the Tamils, Muslims, Catholics -- to win. Some analysts are drawing parallels with Indian Prime Minister Narendra Modi leading his party to win a second term in this year's parliamentary election on a religiously polarized "Hindu wave." 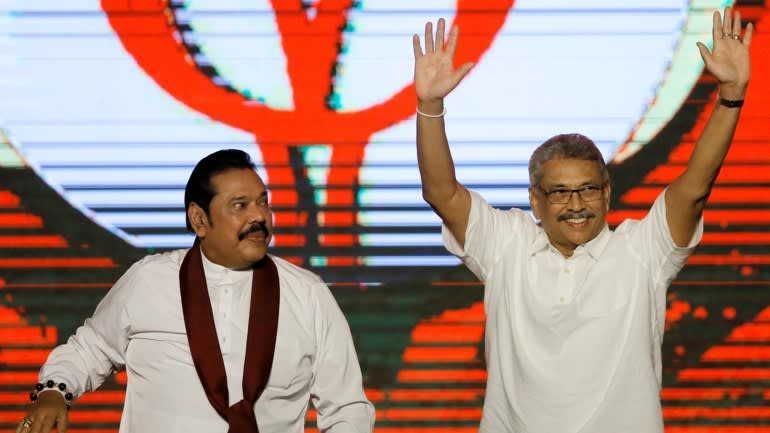 Gotabaya Rajapaksa, right, gestures next to his brother and former president Mahinda Rajapaksa after he was nominated as a presidential candidate during the Sri Lanka People's Front party convention in Colombo in August.   © Reuters

Rajapaksa does not hide from this fact. He said as much during his inaugural speech at his swearing-in. "I know that I could only win with only the voters of the Sinhala majority. But I asked the Tamils and Muslims to be part of my success. Their response was not what I expected."

"The election results amount to a complete fragmentation of the country between the Sinhalese majority and the Tamil and Muslim minorities," said Aruna Kulatunga, a Colombo-based political analyst. "Sinhala hegemony is a political fact, and the Rajapaksas have proved this hegemony with this vote."

This fault line is mirrored in the electoral map after the weekend polls.

Rajapaksa made little headway in the country's northern and eastern provinces, which are home to Tamil and Muslim minorities. The Tamils are the dominant community in the north, while the Tamils and Muslims together account for nearly 75% of the population in the east. His main challenger, Sajith Premadasa, a cabinet minister of the former government and candidate from the New Democratic Front, secured wide support in these areas, winning nearly 80% of the votes in many places.

Ahilan Kadirgamar, a senior lecturer in sociology at the Jaffna University in northern Sri Lanka, said the Tamil vote was a protest vote against Rajapaksa. "The negative image against Gotabaya Rajapaksa still resonates in the north, and there was fear before the election of him coming back to power," he said.

The fear stems from Rajapaksa's reputation as the hawkish defense secretary during Mahinda's presidency, during which Sri Lankan troops defeated the Tamil Tiger rebels, ending a nearly 30-year civil war in May 2009.

The years since saw Mahinda's presidency take on an even more authoritarian bent in his second term, resulting in a spate of human rights violations. This, combined with rampant corruption, contributed to Mahinda's shock defeat in the 2015 presidential poll.

But in Sri Lanka's south and west, Rajapaksa thrives on a different reputation. And his campaign strategists, drawn from a Colombo-based advertising company and skilled pollsters, played up his strongman credentials. They also mapped out a ground game that targeted 65% of the Sinhalese-Buddhist vote to "win only with Sinhalese majority votes," according to a campaign insider.

The plan benefited from a national tragedy, when a wave of suicide bombings by homegrown Muslim extremists rocked the country on Easter Sunday in April, killing over 250 people and injuring 500. The bombs stoked anxiety across the country, with the Sinhalese "looking for a strongman to protect them from personal insecurity," said an intelligence source.

Colombo-based diplomats concede that the Premadasa campaign, which offered welfare measures and to continue the open and inclusive democratic culture since 2015, was unable to offer a strident response to the dominant issue of the day -- a populace still gripped in fear.

"This election came down to how the individual felt about security and the economy," said one diplomat. "It was not about human rights or more democracy or big liberal themes."

Such a shift in voter sentiment from the 2015 presidential poll, where advancing democracy was a theme that helped to defeat the elder Rajapaksa presidency, was palpable in some progressive quarters.

One example was the ground-breaking Right to Information Act, which became law in 2016. Advocates of the law say it has changed the country's political culture by opening space for citizens to make government officials more accountable.

"The RTI is certainly a positive legacy of the coalition government because it pushed for openness and transparency, but it did not translate to winning votes," said Kishali Pinto-Jayawardena, a senior lawyer and member of the RTI Commission. "It was an intangible achievement in an elections context, and intangibles are hard to measure."