BANGKOK -- Sri Lankans will head to polling stations on Wednesday for a general election shaped by the COVID-19 pandemic: They must wear face masks to enter polling booths and observe social distancing while voting. Voters will also be permitted to use their own pens to mark their ballots.

These are just a few of the unprecedented public health measures the country's election commission has announced as it aims to conduct an "infection-free" poll on Aug. 5. Each booth will have hand sanitizers at the entrance and exit of each booth, and the polls will be kept open an extra hour in the evening, according to the commission.

The parliamentary elections follow a spell of uncertainty and legal wrangling since early March, when President Gotabaya Rajapaksa dissolved the 225-member legislature five months ahead of schedule for an early-April poll.

The coronavirus pandemic forced two delays, upending the plans of the hawkish Rajapaksa, who was riding high after his decisive victory in the November 2019 election. The COVID-induced delays prompted fears that the South Asian nation had entered a state of political limbo, as the delay was imposed with no checks on executive authority.

But these disruptions and the virus, which has infected 2,814 people and killed 11 in Sri Lanka, did not dampen the political fervor in one of Asia's oldest -- and still vibrant -- democracies. According to officials, 70 parties, 313 independent groups and 7,452 candidates are represented on the ballot.

Here are five things to know about the elections:

Who are the main parties and what is at stake?

Sri Lanka Podujana Peramuna, a new party that backed Rajapaksa in the November polls, has been tipped to win most legislative seats. Its is being led by Prime Minister Mahinda Rajapaksa, Gotabaya's elder brother and former president, who took over as the interim premier after the presidential poll, despite the SLPP not commanding a majority. SLPP presidential candidate Gotabaya Rajapaksa, right, and his elder brother and former president Mahinda Rajapaksa wave to supporters during a rally in Bandaragama in November 2019.   © Reuters

Mahinda, who served two presidential terms spanning a decade until January 2015, enjoys wide support among the country's Sinhala-Buddhist ethnic majority, who account for 70% of the population. Not surprisingly, the SLPP's political campaign has played to this demographic as in the November elections.

Mahinda secured the backing of this demographic after ending a nearly 30-year civil war against the separatist Tamil Tigers during his first term. An SLPP-led government will mark the complete dominance of the executive and the legislative branches by the country's most influential clan, the Rajapaksas.

There are only two parties who stand in the way: United National Party and Samagi Jana Balawegaya. But the odds are stacked against them, given that SJB is a breakaway faction of the UNP -- one of the country's oldest political parties -- and the campaign trails of both have been dogged by backstabbing to settle old scores rather than mounting a credible challenge against the well-oiled Rajapaksa machine.

The SJB is led by Sajith Premadasa, a former UNP deputy leader and senior cabinet minister in the coalition government that has been governing the country. His party will likely beat out the UNP old guard at the polls. Not surprisingly, the youthful Premadasa, who lost to Gotabaya in November, is campaigning on themes that mix what the right-of-center UNP is known for -- such as less government intervention in the economy -- and an appeal to the rural heartland.

Only a handful of smaller parties, drawn from candidates promoting the interests of the Tamils, the country's largest minority, the Muslims, the second largest minority, and a still-popular Marxist-leaning party, have emerged as pivotal in the contest. The parliamentary seats they secure could determine the degree of influence the Rajapaksa clan wields in the next legislature.

Will parliamentary elections be more important than the presidential election last year?

Parliamentary elections often follow presidential polls and the twin outcomes determine the policies of the new president. A likely victory of Gotabaya's SLPP will ensure that the president and parliament march in lockstep, marking a break from the previous government, which was a coalition of political rivals. The November polls seemed to suggest that voters had lost their appetite for a bipartisan administration, after the initially optimistic coalition under former President Maithripala Sirisena and Prime Minister Ranil Wickremesinghe in 2015 ended up as deeply divided and dysfunctional. Public desire for a stable government means that the SLPP needs to win the 113 seats that are up for grabs, providing Gotabaya a government packed with allies.

Gotabaya has complained since his electoral triumph that he has been restrained by the 19th amendment to the constitution -- a change made to the 1978 charter in the early years of the reformist coalition government in 2015. The amendment checks the executive authority that presidents had hitherto enjoyed, with more power reverting to the prime minister, parliament and independent commissions.

Consequently, the Aug. 5 parliamentary elections have an added dimension: Gotabaya's overt push for the SLPP to secure a two-thirds majority in the next legislature to amend the constitution and revert to the previous political order, in which the president enjoys absolute authority.

Critics have warned against this, framing it as an "existential threat" to the future of Sri Lanka's beleaguered democratic culture. But observers believe that the SLPP's mission is a tall order, since it needs to bag 150 seats for a two-thirds majority. A more likely figure will be 130 seats for at least a stable government with a simple majority.

Why does the election matter to the international community, especially China and India?

Sri Lanka's elections have become a measure to gauge the influence that regional and global powers wield on the island, which straddles one of the world's busiest shipping routes. India, the South Asian power, held sway for decades until China tipped the balance, stepping up its presence on the island by financing billion-dollar infrastructure projects and debt relief after the civil war ended. Japan -- for decades Sri Lanka's leading development partner -- and the U.S. have had to vie with deep-pocketed China as it eyes Sri Lanka as an economic steppingstone in the Indian Ocean to expand its Belt and Road infrastructure initiative.

Since Mahinda's presidency, the Rajapaksas have grown closer to China than to India, Japan and the U.S. An SLPP triumph will reveal the extent of this shift. India and Japan have already faced setbacks early in Gotabaya's first term, with massive infrastructure projects that had been approved by the previous administration, which appeared more pro-Western and was diplomatically closer to India, being put on hold. 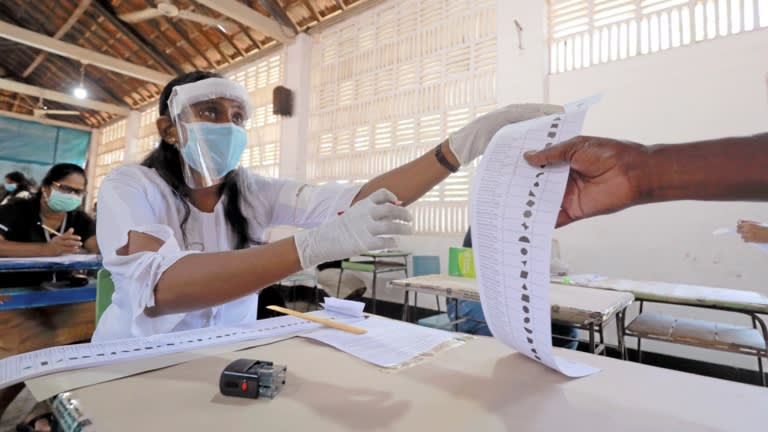 An election officer works through a voting drill at a school in preparation for the upcoming election.   © Reuters

What impact will COVID-19 have on the elections?

Sri Lanka will be the first South Asian nation to hold an election in the middle of the pandemic, and the campaign reflects this new reality. The once loud, open-air concert-like rallies of the past have given way to vastly smaller gatherings. Candidates turned to social media to explain their policies, with Facebook, the country's most popular platform, becoming the medium of choice.

The pandemic's impact will be felt on polling day in a country where voter turnout averages 70%, and the election commission has conducted mock polls to ensure voters' safety on the day. The commission has set up 12,985 polling booths for the 16.2 million registered voters.