COLOMBO -- As Sri Lanka remains on a knife edge three days after the country suffered its worst terrorist attacks in a decade, attention has shifted to the links the terrorist group Islamic State had forged with the South Asian island's first Muslim suicide bombers.

Those ties were underscored Tuesday after IS claimed responsibility for the bombings of three churches and three luxury hotels, killing 359 people and injuring 500 others. The terror network stated through its AMAQ news agency that it had groomed the Sri Lankan attackers, who were already members of the National Thowheeth Jama'ath, a homegrown Islamic extremist group, for the Easter Sunday attacks.

The claim was backed up by a chilling video, purportedly released by IS, of seven suicide bombers taking an oath to the leader of IS before they struck in Colombo, Negombo, north of the capital, and the eastern city of Batticaloa. The faces of all the men in the video are covered, other than that of NTJ Sri Lankan head, Mohamed Cassim Mohamed Zaharan, who led the oath taking.

On Wednesday, Sri Lankan officials said there were nine suicide bombers involved in the attack. One of them was a mother, who blew herself up Sunday during a police raid after the first wave of attacks on the hotels in the morning.

The Sri Lankan government has said it hopes the U.S. FBI can offer additional information about the seven NTJ attackers, who hit their targets precisely using military-grade explosives -- something not seen even during the country's nearly 30-year civil war with Tamil Tiger separatists and two Marxist uprisings.

Diplomatic sources confirmed that FBI investigators, who arrived in Sri Lanka this week, will study the blast patterns at the targeted churches to determine the type of explosives used and how the bombs were constructed. They already have some clues: There is footage of a suicide bomber walking into one of the churches carrying a large backpack.

"It appears that sophisticated devices were used to trigger the blasts," said Aruna Kulatunga, a Colombo-based political analyst. "Even if the backpacks carried 15 kg of C4 explosives, the impact of the blasts in the church in Colombo suggests that it would not have been possible under normal circumstances. Clearly there was something more," Kulatunga said. 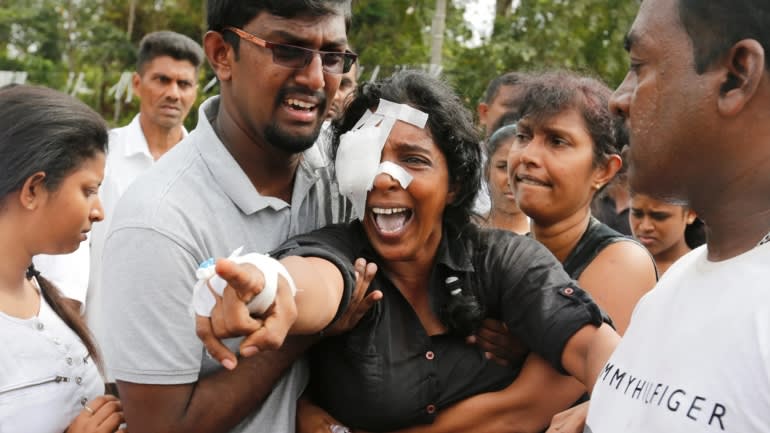 A woman who lost her husband and two children during the bombing at St Sebastian's Church yells towards the graves during a mass burial for victims at a cemetery near the church in Negombo, Sri Lanka on April 24.   © Reuters

There is growing suspicion in some foreign intelligence quarters that the bombers may have used TAPT, or Triacetone Triperoxide, a substance labeled the "Mother of Satan" by Al Qaeda terror group for its destructive force.

That is not the only international twist in the probe. After the carnage, foreign links to the NTJ and its leader have emerged. Moderate Muslim organizations raised the alarm with Sri Lanka's intelligence agencies over Zaharan's extremist activities three years ago. They say he was operating out of southern India, or had links there, in the months before Sunday's bombings. "All his YouTube videos of hate speech were uploaded in India," Hilmy Ahamed, vice president of the Muslim Council of Sri Lanka, told the Nikkei Asian Review. "He has a base in either Chennai or Bangalore."

Zaharan's Indian ties are expected to come under closer scrutiny in light of intelligence provided by India to Sri Lanka ahead of the suicide attack. India's National Investigation Agency had specific intelligence on the string of blasts, The Hindu, an Indian English-language daily, reported this week. Indian investigators unearthed the plot during an interrogation of an IS sympathizer in the southern Indian state of Tamil Nadu six months ago. They warned their superiors to pass on the information to Sri Lanka, the daily added.

Sri Lanka's deeply divided coalition government is under growing pressure for failing to thwart the attackers, whose names were already known. Even a warning to Sri Lankan officials from U.S. intelligence failed to draw a response. One warning came just two days before the attack.

But the journey of radicalized Sri Lankan Muslims to IS predates the rise of the NTJ, which gained more notoriety after members of the group destroyed Buddhist statues in a rural part of the predominantly Buddhist country earlier this year. Following that act of vandalism, Sri Lankan investigators followed leads to an NTJ hideout in a coconut plantation in the northwest of the country, where they stumbled upon a cache of explosives, including 100 kg of C4 and 100 detonators.

Early signs that Sri Lankan Muslims were being recruited into IS emerged in 2014, when two brothers and their families joined the terrorist group. One of the brothers died as an IS combatant, while the others reportedly served as noncombatants, providing logistical support. Both brothers studied at Trinity College, an elite, all-boys Christian school in Kandy, in central Sri Lanka.

According to reports, at least 32 Sri Lankan Muslims have joined IS. Some, like the two brothers, are from affluent backgrounds, including two of Sunday's suicide bombers, who were sons of a millionaire in the spice trade.

"There are surely international links, but the question is how, and when, and by whom they were established," said Phill Hynes, the lead terrorism expert at ISS Risk, a Hong Kong-based security consultancy. "NTJ are simply the support mechanism or the delivery platform."

If IS did have a direct hand in Sunday's massacre, it would undercut U.S. President Donald Trump's boast that the terror network has been defeated, Hynes said. "It's the biggest operation, and by far [the most] successful, if body count alone is taken as the barometer for success, since the U.S. and the West rushed to proclaim the demise of the 'caliphate' and IS," he said.