As the country's death toll from the pandemic inches toward 200, the government of the hawkish President Gotabaya Rajapaksa is sticking to a policy backed by hard-line allies from the majority Sinhala-Buddhists, the political constituency that helped Rajapaksa secure two thumping electoral mandates over the past year. The official policy is for COVID-19 victims to be swiftly cremated. It has sent religious minorities already grieving for lost kin into deeper anguish.

The youngest victim was a 20-day-old Muslim baby who was forcibly cremated against the parents' wishes. An estimated 80 Muslims have died of the coronavirus, with their surviving family members suffering the same indignity. The pandemic has infected close to 40,000 people since the first case was detected on the Indian Ocean island early this year.

The policy "has led to so much agony within the community at a time when they have to grieve for someone who has died," said Shreen Saroor, a leading Muslim women's rights activist. "The relatives are caught in a dilemma of having to sin and having so much guilt for being part of the sin because of the cremation."

The anti-burial measures endorsed by Rajapaksa, who enjoys autocratic powers following a constitutional amendment, have been defended on two grounds that have made Sri Lanka an outlier in the global response to the deadly pandemic. One rationale is that burying COVID victims could result in the virus spreading in the soil and contaminating the country's water table. The other: Muslims will use the dead bodies in graves as a "biological weapon." 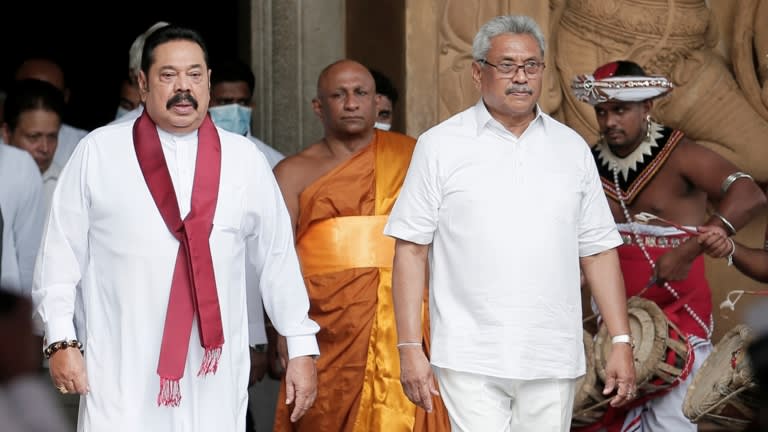 Prime Minister Mahinda Rajapaksa, left, and President Gotabaya Rajapaksa. The Rajapaksa government's forced cremations appear to have touched off a sense of solidarity in a deeply polarized nation.   © Reuters

Sri Lanka's stance flies in the face of the international consensus among medical scientists and virologists regarding the last rites of COVID victims. The World Health Organization, the Geneva-based U.N. body, has shaped international opinion with guidelines that state the choice of cremation or burial of a COVID victim is a cultural decision. Over 180 of its members have endorsed this.

Not surprisingly, there are emerging signs that Sri Lanka will pay a diplomatic price for Rajapaksa's efforts to weaponize COVID. Colombo-based embassies from the world's Muslim countries "are monitoring the burial ban closely and gathering information," said a diplomatic source from an Asian mission in the Sri Lankan capital.

The embassies have taken a cue from the Organization of Islamic Cooperation, a Saudi Arabia-based 57-member bloc that has issued three statements condemning Sri Lanka's forced cremation policy.

Likewise, Western diplomatic missions have stood behind statements issued by U.N. officials about the Rajapaksa government hounding religious minorities in their hour of grief. "I fear that not allowing burials is having a negative effect on social cohesion and, more importantly, could also adversely impact the measures for containing the spread of the virus as it may discourage people to access medical care when they have symptoms or history of contact," wrote Hanaa Singer, the U.N. Resident Coordinator in Sri Lanka, in a letter to the Rajapaksa government in November.

The international scrutiny Sri Lanka is now under adds to the diplomatic pressure it is expected to face in early 2021, when its postwar record will be in the spotlight at the United Nations Human Rights Council in Geneva. "The members of the OIC have traditionally backed Sri Lanka or abstained when there were resolutions critical of the country at the UNHRC," said Hilmy Ahamed, vice president of the Muslim Council of Sri Lanka, a civil society network. "But Sri Lanka may not be assured of such support in Geneva next year because of the enforced cremations."

The nearly 30-year civil war, which ended in May 2009, pitted government troops against the separatist Tamil Tigers. The conflict's grim numbers include more than 100,000 people killed and over 23,000 missing, according to estimates.

For years, an international push for accountability -- including in regard to grisly accounts of alleged war crimes committed by government troops and the separatists -- has cast a shadow over Sri Lanka. Now the public backlash against the enforced cremations has laid bare a new layer of pain to the still unhealed wounds of Sri Lanka's fragile, postwar peace.

The protests that have spread locally as well as in Western cities suggest the government's forced cremations have kindled a sense of solidarity in a deeply polarized country. The participants come from across the country's religious communities -- Buddhists, Hindus, Catholics, other Christians and Muslims. Their banners decry the country for being a graveyard for human rights. 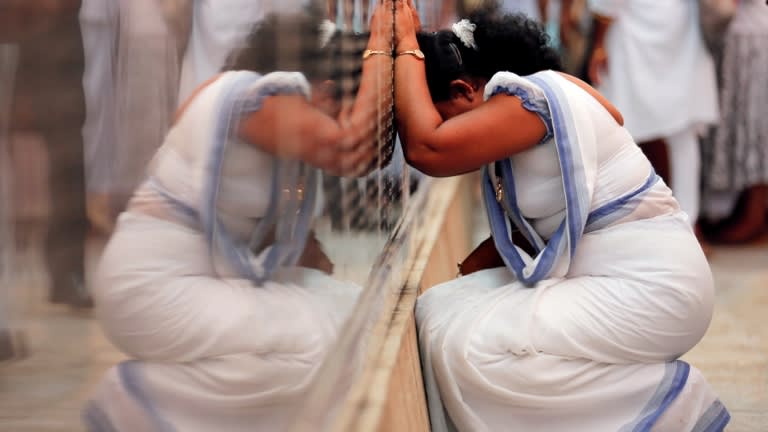 A family member of a soldier who died in Sri Lanka's civil war cries. The country, still grieving from its long conflict, is now dealing with a new layer of pain inflicted in the name of caution.   © Reuters

Symbols of the interreligious solidarity that has taken shape against Rajapaksa are appearing. One is a small white cloth that protesters have begun to tie to the poles that surround the main cemetery in Colombo, where the body of the 20-day-old Muslim baby was forcefully cremated. The white cloths symbolize the white shrouds that the bodies of dead Muslims are buried in. White is also the color of the clothing people wear at non-Muslim funerals.

Some demonstrators wear strips of white cloth around a wrist. The idea of the white-cloth protests was conceived by a Christian and Hindu, both in their 20s.

"This issue has grown beyond Muslim circles," said Ruki Fernando, a prominent Catholic human rights activist. "There is more solidarity and consciousness, and this discontent will add to the fire the government may face at the U.N. in Geneva."