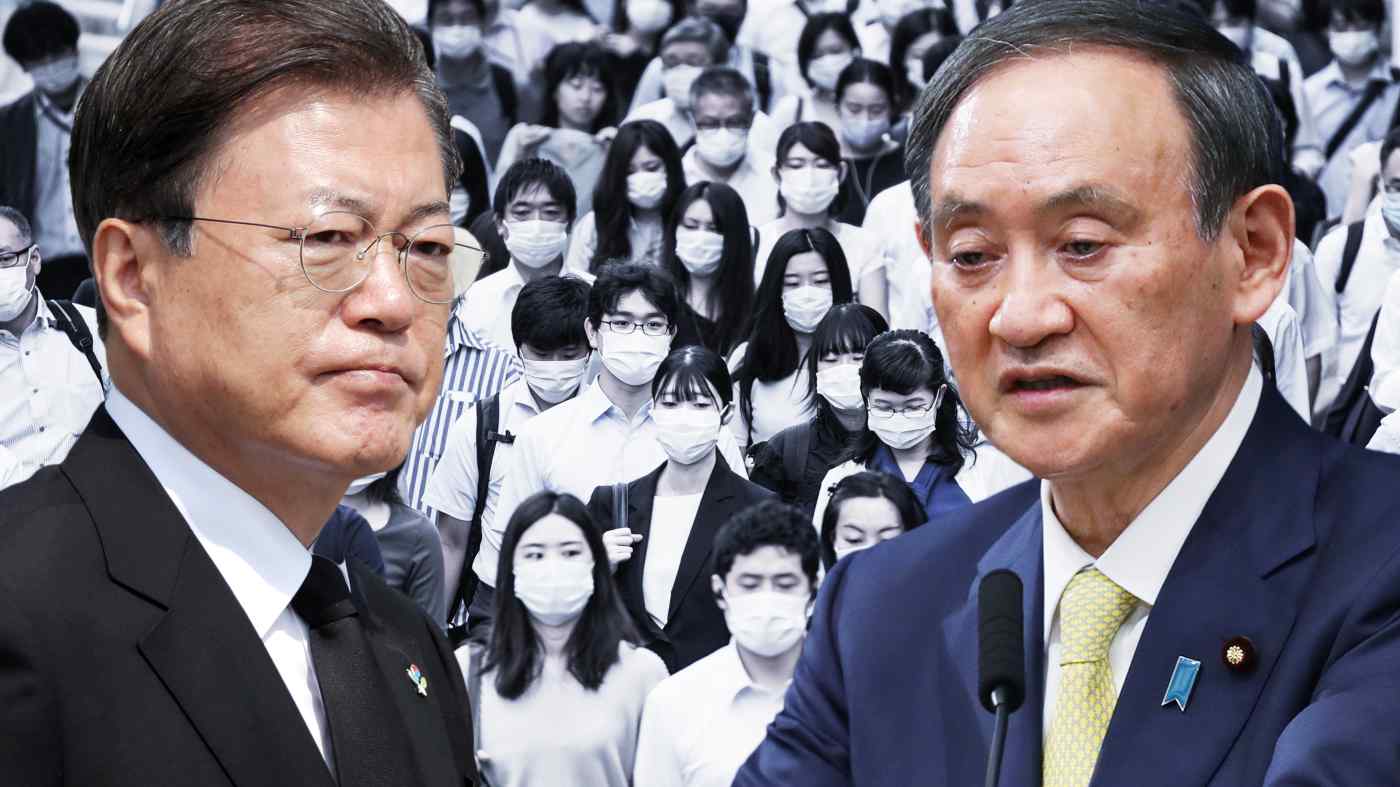 TOKYO -- Surging COVID-19 cases have ended the honeymoon of Japanese Prime Minister Yoshihide Suga and are eating away at the political capital of South Korean President Moon Jae-in as he enters his final 18 months in office.

While multiple issues are hurting the two leaders, their perceived handling of the pandemic appears to be the biggest factor in their slumping approval rates. Elsewhere in Asia, Indonesian President Joko Widodo is another leader under scrutiny, whereas Taiwanese President Tsai Ing-wen continues to ride high in the polls as her government keeps the virus at bay.

"The approval rating of leaders in general has been directly affected by how the public perceives their handling of the pandemic," Robert Dujarric, professor of international relations at the Tokyo campus of Temple University, told Nikkei Asia. "The extent that the virus spreads over the winter months will be closely watched by leaders, who are trying to keep their economies ticking over while minimizing risks."

Japan's Suga swept into office in a September ruling Liberal Democratic Party election after his predecessor, Shinzo Abe, stepped down citing health issues. He scored 74% in his debut Nikkei/TV Tokyo poll -- the third highest for any new cabinet in Japan -- as the public saw him as a "trustworthy character," perhaps boosted by his image as a farmer's son from the snowy north.

The period coincided with a fall in coronavirus cases after a second wave in the summer. Japan's average number of new daily infections in September dropped to around 500, according to World Health Organization data.

But roll forward three months, and support for Suga's cabinet plummeted to 42% in the latest Nikkei survey published on Sunday -- a 16 percentage point drop from November and the steepest in more than a decade. Some 59% of respondents disapprove of his handling of COVID-19, as average daily cases this month have surpassed 2,600.

Suga has come under fire for delaying a suspension of a nationwide subsidized travel program, and ignoring guidelines by attending a steak dinner with politicians and celebrities.

"With the Suga administration struggling to articulate a clear course of action, the public has turned sharply against the prime minister," Tobias Harris, author of a book about Abe and senior vice president at Teneo, a political risk advisory firm. "If cases continue to mount, Suga will simultaneously face more pressure to impose more stringent measures -- including a partial or nationwide state of emergency that could have the economic impact the prime minister had been hoping to avoid -- and more criticism from within the LDP for having waited too long to react." 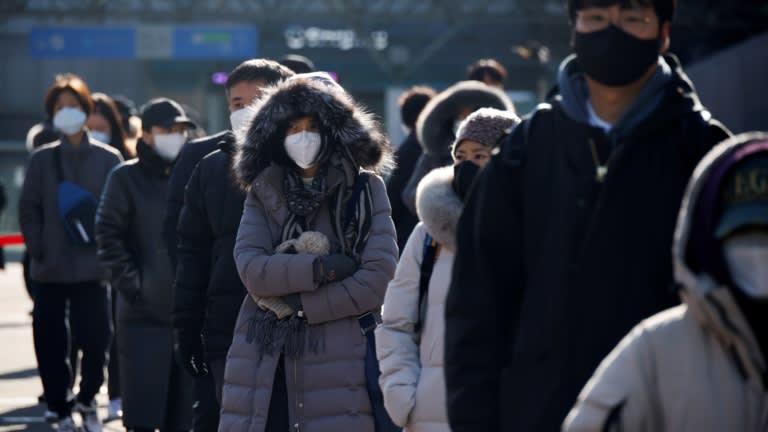 People wait in a line to undergo a COVID-19 test at a testing site temporarily set up in front of a railway station on Dec. 25 in Seoul.   © Reuters

It's a similar situation for Moon in South Korea. The country was lauded internationally for its effective early handling of the pandemic -- the key factor in a landslide win for Moon's Democratic Party in April's legislative election.

But the country is also experiencing a third wave, with the daily tally at around 1,000 new cases -- about 70% of them in the densely populated capital area. The government has taken harsher steps such as banning gatherings of more than a handful of people, but Moon has taken flak for failing to quickly secure vaccines.

On top of the resurgent virus, Moon faces criticism for his economic stewardship, for failing to create jobs during his tenure, and for skyrocketing apartment prices around Seoul. He is also taking heat over a growing rift between the government and the country's prosecutors' office, as he seeks to rein in its wide-ranging powers.

Nearly 60% of respondents to a Realmeter poll last week said Moon is doing a poor job, with 37.4% saying he is performing well.

Even so, Teneo's Harris said Moon's situation may be more sustainable than Suga's. "Despite Moon's rising unpopularity, his Democratic Party of Korea still commands a large legislative majority and will be able to run a new presidential candidate in 2022, since the president is limited to one term. There is little indication that the opposition People Power Party has been able to make significant gains." 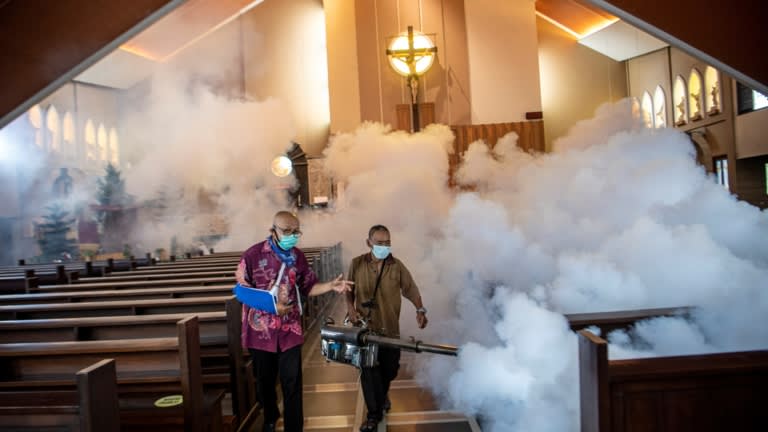 An employee disinfects a church ahead of Christmas mass in Palembang, South Sumatra Province, Indonesia, on Dec. 24.   © Reuters

As for Indonesia, the longer the pandemic continues, the more it seems to drag down Widodo's numbers. The country is Southeast Asia's hardest hit in terms of cases and deaths. Polling is sporadic, but research by the Indonesian Survey Institute shows a fall in support for the president to 58% in October from 65% in August.

While Widodo is unable to run in the next presidential election in 2024 after his second five-year term expires, some surveys have found increased popularity for regional leaders deemed successful in controlling the outbreak. Central Java Gov. Ganjar Pranowo is enjoying the biggest leap, according to a September poll by Indikator Politik Indonesia, and is emerging as the new favorite candidate for president. He belongs to Widodo's ruling Indonesian Democratic Party of Struggle, which has dropped in popularity during the crisis.

For all the bad news for Asian leaders, one who has benefited from the pandemic is Taiwan's Tsai. The island is widely considered a model for handling the virus, and has seen fewer than 800 cases among a population of about 24 million.

Tsai's monthly approval rating has been above 50% since January. The Taiwan Public Opinion Foundation put her consistent score down to COVID handling, a bounce after a landslide election win in January and a strong stance against China as Hong Kong fell further under Beijing's control.

While Tsai has suffered a little from lifting a ban on U.S. pork imports, her latest score in November was 55%. She has also been helped by an economy that is outperforming Asian peers Singapore, Japan and South Korea thanks to semiconductor demand and diversification of the global supply chain amid U.S.-China tech tensions.

Singapore, too, has largely contained the coronavirus and has reported no more than one daily community infection over the past few weeks. Prime Minister Lee Hsien Loong was applauded for announcing approval of the Pfizer-BioNTech vaccine earlier this month and free inoculations for everyone by late 2021.

"It's still early days but the announcement that Singapore will likely commence COVID-19 vaccinations in January 2021 is a figurative shot in the arm for confidence in the government's handling and a boost to the government's performance legitimacy," Eugene Tan, associate professor of law at Singapore Management University, told Nikkei Asia. A healthcare worker wearing personal protective equipment collects a swab sample from a man at a market area in the old quarters of Delhi, India, on Dec.19.   © Reuters

The situations in the Philippines, India and Thailand differ for varying reasons.

Philippine President Rodrigo Duterte's handling of coronavirus crisis has been widely criticized, yet a major poll in October showed his public support rating catapulted to a record 91%. Analysts believe that cash aid helped and Duterte's portrayal of the crisis as an unprecedented, existential threat made people rally behind him.

Still, some analysts say Duterte could take a hit if the economy worsens in 2021 and the public feels the Philippines is falling behind in the global vaccine drive.

In India, the public appears satisfied with Prime Minister Narendra Modi's handling of the pandemic, despite the country having the second highest number of cases globally after the U.S. Modi is also actively promoting India's vaccine manufacturing efforts, vowing to help the world combat the crisis.

In October, an IANS-C Voter Media Tracker survey of 5,000 people showed that 69.3% of respondents trusted Modi's government. Separately, the August 2020 edition of the biannual Mood of the Nation survey of over 12,000 respondents found that 77% were satisfied with Modi's response to COVID-19 -- including 29% who called it "outstanding" and 48% who felt it was "good."

India is now seeing its lowest level of daily cases in about six months.

Meanwhile, Thailand has been relatively successful in containing the outbreak -- with just over 6,000 confirmed cases in total. But economic damage from stringent measures and persistent youth demonstrations have held back support for Prime Minister Prayuth Chan-ocha.

In June, 25.5% of respondents to a poll by the National Institute of Development Administration said Prayuth was their preferred choice as leader. In September, his rating was down to 18.6%, though the figure bounced back to 30.3% in a poll published Sunday.