TOKYO -- Japan's ruling Liberal Democratic Party failed to win any of the three parliamentary by-elections held Sunday, a loss that weakens Prime Minister Yoshihide Suga's standing in the party ahead of a general election later this year.

The races in Hiroshima, Nagano and Hokkaido were the first national elections since Suga became prime minister last September, and the first opportunity for voters to render judgment on his handling of the coronavirus.

Candidates backed by the main opposition Constitutional Democratic Party of Japan won all three seats, in an outcome widely seen as a bellwether for the general election. The four-year term of the Diet's lower house ends Oct. 21, before which an election must be called.

The defeats for the LDP also deliver a blow to President Joe Biden's administration, which has gone out of its way to help the Japanese leader bolster his domestic political standing.

"The United States can only be effective in Asia when the U.S.-Japan relationship is strong and Japan is steady and stable," a senior administration official told reporters ahead of Suga's visit to the White House earlier this month. 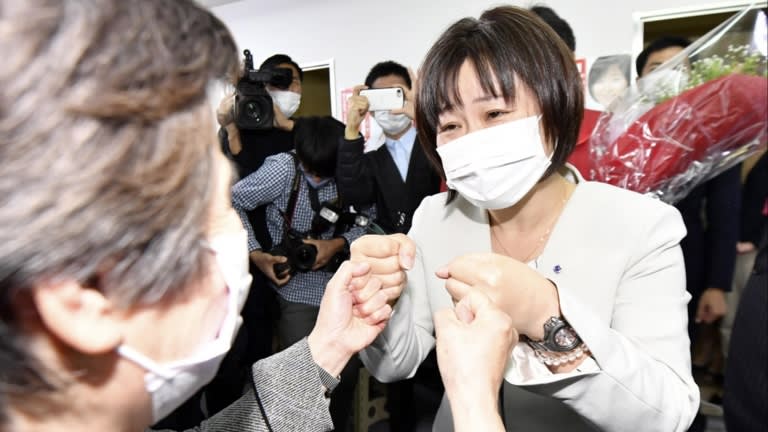 Opposition candidate Haruko Miyaguchi celebrates her win with a supporter in Hiroshima on April 25.   © Kyodo

Explaining why Suga was chosen as the first foreign leader Biden welcomed to the Oval Office, the official said, "We've experienced almost 10 years under Prime Minister [Shinzo] Abe, and now Prime Minister Suga follows suit, and we're looking forward to a long and strong partnership with him."

Anri Kawai, the wife of former Justice Minister Katsuyuki Kawai, lost the seat after a court found her guilty of vote-buying in the 2019 election.

Jiro Hata, 51, won the upper house seat in the Nagano constituency held by his brother Yuichiro Hata, a former land minister who died in December after becoming infected with the coronavirus. The Constitutional Democratic candidate defeated LDP rival Yutaka Komatsu, 59.

Komatsu had vowed to strengthen the government's response to COVID-19, but voters were not convinced, as Japan entered the third state of emergency in Tokyo, Osaka, Kyoto and Hyogo. Japan also trails other advanced economies in vaccine inoculation rates. Fumio Kishida, Japan's former foreign minister, learns of the LDP defeat in his home constituency of Hiroshima on April 25.    © Kyodo

In a lower house by-election for the No. 2 district in Hokkaido, Constitutional Democratic candidate Kenko Matsuki, 62, breezed to victory after the LDP chose not to field its own candidate. The Hokkaido seat was vacated by former farm minister Takamori Yoshikawa, an LDP veteran who resigned before being indicted over allegations that he received bribes from a representative of an egg producer.

The triple defeat casts doubt on Suga's ability to lead the LDP in the general election and could limit his options for calling an early snap vote.

Suga's term as LDP president, and thus his time as prime minister, expires on Sept. 30.

Especially damaging was the defeat in Hiroshima, a conservative stronghold where the LDP won six of the seven constituencies in the 2017 general election.

It was also a test case for the political muscle of LDP heavyweight Fumio Kishida, who leads the LDP in Hiroshima. The former foreign minister and chairman of the LDP Policy Research Council is a potential candidate for prime minister, but the loss in his power base weakens his standing in the party as well.