A view of the confluence of the Mali and N’mai rivers in Kachin State, the proposed site of the suspended Myitsone dam project. (Photo by Sebastian Strangio)
SEBASTIAN STRANGIO, Contributing writerJune 20, 2016 21:30 JST | ASEAN
CopyCopied

MYITKYINA, Kachin State -- Since its suspension five years ago, the $3.6 billion Myitsone hydropower project has come to symbolize the bad old days in Myanmar.

Signed into existence by the military government and the state-owned China Power Investment Corp. in 2006, the project proceeded with little public consultation, and even fewer discussions of its social and environmental costs. All this despite the fact that the 6,000-megawatt dam was expected to displace 10,000 people and flood 766 sq. km of forest -- an area larger than Singapore. The project eventually galvanized such strong opposition that President Thein Sein, in his first year in office, decided to put the project on hold, a move that in hindsight kicked off a period of far-reaching economic and political reform. Now, with the bad old days supposedly over, the new government led by Aung San Suu Kyi's National League for Democracy is faced with the difficult decision of whether to resume the project in some form, or cancel it altogether.

From the Myitsone confluence, the picturesque point where the waters of the Mali and N'Mai tumble together to form the Irrawaddy River, there is little to see of the dam's construction, which never got very far. Across the water, trees that were cleared have begun to grow back and the site remains still and peaceful. But if the Chinese government gets its way, this quiet spot could again become a focus of frenzied activity.

Beijing's relations with Naypyidaw soured after the cancellation of work on the dam, which the government used as a pretext to distance itself from China and open a new era in relations with the U.S. and other Western countries. But China has since been wooing the new NLD government.

In June 2015, before the party's stunning electoral victory in November, Suu Kyi was invited for talks with President Xi Jinping in Beijing. Then, when the NLD government finally took office under President Htin Kyaw, the first high-level diplomatic caller was Chinese Foreign Minister Wang Yi, who pledged renewed support, including backing for large-scale infrastructure development. 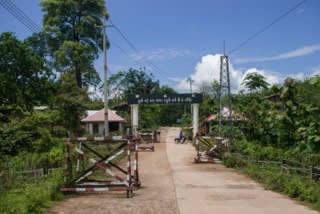 Yun Sun, a fellow at the Stimson Center in Washington, DC, said it all amounted to an attempt to regain influence. "Beijing's agenda is to repair relations and show the world that China has not 'lost' Myanmar," she said.

So far, the Chinese charm offensive seems to be producing results. Committed investments from China are on the rebound, spiking to $3.3 billion in the fiscal year to April 2016 from just $56 million in 2014. In December 2015, two consortia led by state-owned CITIC Group Corp. won bids to construct a strategic deepwater port and special economic zone at Kyaukphyu in western Rakhine State. China has already built oil and gas pipelines running from Kyaukphyu across Myanmar to Yunnan province in the country's south, and has ambitions to eventually connect the two regions by rail.

In early May, Naypyidaw approved the resumption of production at Letpadaung copper mine in north-western Myanmar, not long after China's Wanbao Mining, the mine's joint operator, released a 10-minute film promising more public consultation.

In June, they sent a delegation to Myitkyina to lobby local officials and have set up a website debunking "myths" about the Myitsone project and touting its benefits to Myanmar. Yun said that Beijing was currently "very hopeful" of getting the dam project back on track in some form. "The hope is to revise the original plan but proceed with alternatives with equivalent outcomes," she said. A home in Aungmyintha village, where villagers have been relocated from the proposed site of the dam (Photo by Sebastian Strangio)

SPIC could not be reached for comment, and the Nikkei Asian Review was refused access to the Myitsone dam construction site. But Hong Pang, China's ambassador to Myanmar, recently told local media that he expected the project to go ahead, since the alternative -- financially compensating China for its cancellation -- would be too expensive.

The Myitsone project, however, is likely to be a tough sell in any form. Local opposition to the project remains almost universal. To start with, the Myitsone confluence has deep-rooted cultural significance for the Kachin people: The Mali River, according to Kachin mythology, was measured out by the Creator with a golden spoon, and the N'Mai with one of silver. "It is like our lifeblood," said Mung Ra, 55, a Kachin Baptist pastor from a village near the confluence. Daw Kam, 32, a Kachin shopowner in Aungmyintha village, a relocation site for villagers displaced before the dam’s suspension in 2011 (Photo by Sebastian Strangio)

There are also worries that the dam will disrupt the flow of sediment in the country's main waterway, while reportedly exporting 90% of the power to China. "We had to sacrifice a lot for China. Why should we do this? It should be cancelled," said Steven Nwot, general secretary of the Kachin Development Network Group, a local civil society organization. When the Chinese delegation visited Myitkyina in June, it was met by protests. On its website, SPIC denies that 90% figure, arguing that the agreement has been misinterpreted.

So far, the NLD has said little about Myitsone. Hantha Myint, a member of the NLD's economic committee, said he was unaware of the current status of discussions. "The party's position is that we should review the contract, and then we should take proper environmental and social impact assessments if we decide to go further," he said

That could be a risky gamble, said Tu Ja, the founder of the Kachin State Democratic Party. "If they do against the will of the people, they will suffer, they will be opposed by the people," he said. After years of being dictated to by the central government, he added, the dam was "a major problem" for the Kachin people. 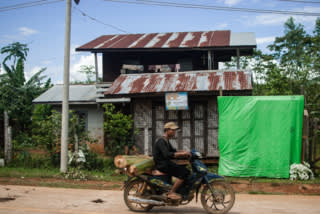 A home in Aungmyintha village (Photo by Sebastian Strangio)

Most locals seem to agree, and are growing anxious at the government's silence. "[The people] voted for Aung San Suu Kyi because the people believed that she would stand for the people," said Daw Kam, 32, a Kachin shop owner in Aungmyintha, the main relocation site for the 2,500 people displaced by the project in 2009 and 2010. If the government decides to resume the project, she promised that locals would "fight against Aung San Suu Kyi."

Hkyet La Awng, the state minister for natural resources and environmental conservation, and an NLD member, said that the dam project represented a true dilemma for Htin Kyaw's government. On the one hand, approving the dam could alienate the Kachin people, complicating Suu Kyi's bid to end the fighting that has been raging on and off in the state between the Myanmar military and the Kachin Independence Army since 2011.

On the other hand, canceling it risks snubbing an important and powerful neighbor. "We wish to cancel the project," he said in an interview at his home in Myitkyina, "but she has a problem. Firstly, she chose peace."

Nwot of the KDNG said the dam was a symbol of the longstanding political inequities that have allowed the military and rich businesspeople to cart off local resources like jade, timber, and gold, fueling conflict while doing little to improve the lives of people. "If they continue with China these kinds of same mistakes as the former military government, there will never be an end to conflict in ethnic areas," he said. A protestant church in Aungmyintha village, a relocation site for villagers displaced before the dam’s suspension in 2011 (Photo by Sebastian Strangio)

Yan Myo Thein, a Yangon-based political analyst, said that whatever decision is made on the Myitsone project, the Chinese government will have to accept that there is no going back to the way things were before. "They need to initiate reforms on doing business in Myanmar and engaging with the new government," he said. "They have to consider new strategies, new methods."

Whether those efforts are directed at convincing the public, or simply those in power, remains to be seen. Kaw Bu, 64, a resident at the Aungmyintha relocation site, said that regardless of the change of government, people still feel they have little say in the decisions that impact their lives.