A monk protests outside the U.S. embassy in Yangon on April 28 against the official U.S. use of the term "Rohingya" to refer to Myanmar's minority Muslim​s. (Photo by Simon Roughneen)
SIMON ROUGHNEEN, Asia regional correspondentMay 5, 2016 19:30 JST | ASEAN
CopyCopied

YANGON -- Before Aung San Suu Kyi's National League for Democracy routed all comers in Myanmar's elections last November, many speculated that even if her party was always going to win a free and fair vote, the extent of the victory could be curtailed by attempts by Buddhist hardliners to undermine the NLD by stirring up anti-Muslim sentiment among the majority Buddhist electorate.

Rabble rousers such as Wirathu -- a Mandalay-based monk known for his derogatory and xenophobic rhetoric about Myanmar's estimated 5 million Muslims -- opposed the prospect of a NLD-led government, saying that such an administration would not only favor Muslims but would bring "chaos" to Myanmar. A woman chants anti-Rohingya slogans outside the U.S. embassy in Yangon on April 28. (Photo by Simon Roughneen)

The previous government of President Thein Sein did little to rein in Wirathu and other nationalist groups such as Ma Ba Tha, prompting suspicions that anti-Muslim, anti-Rohingya tensions were being stoked to dent the NLD's credentials as a defender of Buddhist-majority Myanmar and undercut its electoral prospects.

In the end, the NLD did not include any Muslims among the more than 1,000 candidates it fielded in the elections. Suu Kyi, long recognized around the world as a staunch defender of democracy and human rights, refused to comment on the plight of Myanmar's roughly one million Rohingya, a Muslim group living mostly in the country's western Rakhine state, who have been denied civil rights under a 1982 citizenship law. Rohingya lawmakers from the military-backed ruling party in the last parliament were barred from seeking re-election and the Rohingya were prevented from voting.

The Union Solidarity and Development Party, led by Thein Sein, was thrashed in the election, winning only 5% of the seats in Myanmar's upper house and 7% in the lower house in November, although it won nearly 30% of the popular vote. The NLD won 80% of the contested seats, although it holds only around 60% of all parliament seats since a quarter of total seats are reserved for the military.

The Myanmar government does not recognize the existence of a Rohingya ethnic group, dismissing them as "Bengali" and therefore immigrants from Bangladesh, which borders Rakhine state. Around 140,000 Rohingya were driven from their homes in mob violence in late 2012, while tens of thousands more have braved storms and human traffickers to find refuge in neighboring Malaysia.

Before the election, Rohingya harbored hopes that a NLD election win would see an easing of their plight, with several interviewed by Nikkei Asian Review ahead of the election saying that they hoped the NLD's apparent reluctance to speak up for them was merely tactical to avoid forcing Wirathu and others to urge the public to vote against the NLD.

But prospects for an improvement in the Rohingya's situation appear bleak after the Myanmar foreign ministry, which is headed by Suu Kyi, recently asked the U.S. to refrain from using the term "Rohingya." The request was made by Suu Kyi according to a ministry official. 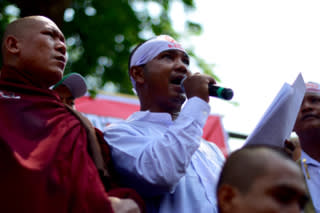 A protester outside the U.S. embassy in Yangon reads a statement condemning the U.S. for using the term "Rohingya" in a recent press release.

Less than a week before the request was made, around 300 protestors calling themselves the "Myanmar National Network" demonstrated outside the U.S embassy in Yangon because they objected to the use of the word "Rohingya" in an official statement offering condolences on the drowning of what was thought to be around 40 Rohingya in the sinking of a refugee boat off the Rakhine coast.

The dead have since been reported as being Kaman, a mostly Muslim minority that the government recognizes, but which also faced violence during the 2012 pogroms.

The protestors said that the term "Rohingya" is an "offence not only to local native ethnic Rakhines but to all ethnic groups in Myanmar," and asked that the U.S. to "seriously respect diplomacy ethics" by not using the term.

U.S. ambassador to Myanmar Scott Marciel responded that it is common practice for "communities anywhere [to] have the ability to decide what they should be called. And normally when that happens, we would call them what they want to be called. It's not a political decision; it's just a normal practice."

The protesters also warned that they would oppose any effort by the NLD to change "race and religion protection" laws approved just before the election by the previous administration, which included restrictions on religious conversion and interfaith marriage.

The Arakan National Party, which represents Rakhine Buddhists who live near Rohingya enclaves, also said it would also protest against repeal of the laws. The ANP was already angered by the NLD's decision to allocate to itself the chief minister positions in Myanmar's 14 regions and states, some of which are home to powerful ethnic minorities.

Aung Win, a Rohingya community leader in the Rakhine capital of Sittwe, said that he was not surprised at the foreign ministry's petition to the U.S. "The foreign minister and Nobel peace prize winner Aung San Suu Kyi understands very well about the Rohingya and what is happening in Rakhine state, but she is silent and not saying anything."

Rather than dealing with the Rohingya issue, some observers believe that Suu Kyi is now focused on changing the country's constitution to allow her to become president. The new government has also said it wants to prioritize peacemaking with Myanmar's many ethnic militias as well as promote economic growth.

"I think the new government is more concerned right now about maintaining domestic political stability. The NLD probably doesn't want to have to deal with the voices of the Myanmar's extreme nationalists as it feels that it already has a lot on its plate," said Miguel Chanco, Southeast Asia analyst for the Economist Intelligence Unit.