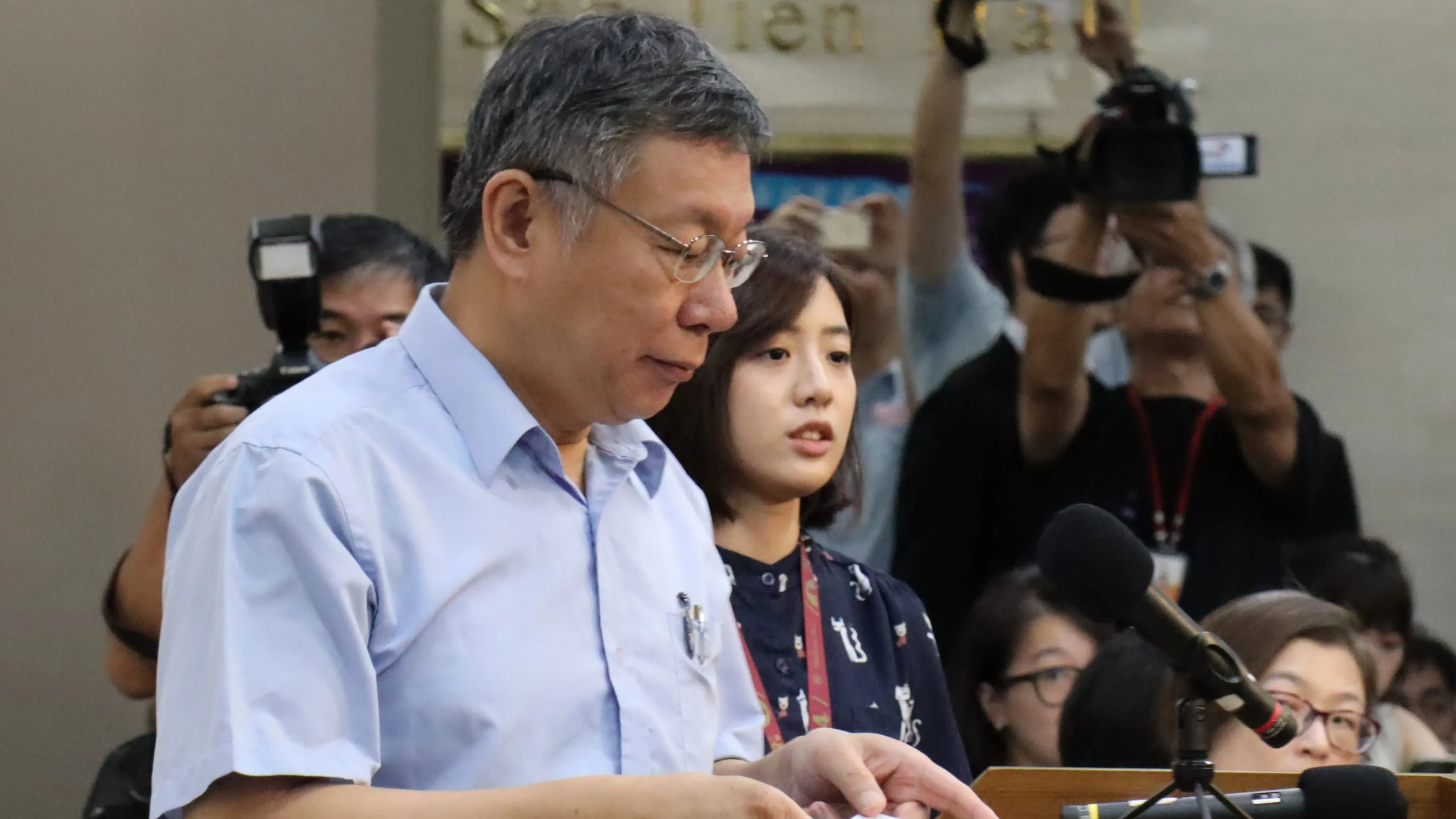 Taipei Mayor Ko Wen-je, an independent, will decide whether to challenge Taiwanese President Tsai Ing-wen in January's election before the registration deadline of Sept. 17. (Photo by Lauly Li)

TAIPEI -- Taipei City Mayor Ko Wen-je said Thursday he would form a political party to run in January's legislative elections, but did not say whether he would challenge incumbent Tsai Ing-wen in the 2020 presidential race.

At a news conference in Taipei, Ko said he would make a final decision on whether to run for president before the registration deadline of Sept. 17. He also did not rule out the possibility of a collaboration with Foxconn founder Terry Gou, who returned to Taiwan on Wednesday after spending two weeks overseas following his heavy loss last month to Kaohsiung Mayor Han Kuo-yu in the opposition Kuomintang's primary race.

The move by Ko, an independent, risks disrupting the momentum of both Tsai and Han's campaigns amid heightened tensions with Beijing.

The former ally of Tsai describes himself as a nontraditional politician, and is popular among young voters for his blunt comments on social issues and propensity to swear in public when angered. Many of Ko's supporters also back Tsai and a presidential run could split the China-skeptic vote. But at the same time, teaming up with Gou could gain him votes from the China-friendly KMT.

"Taiwan's politics 'overrides' professions when it comes to public affairs... that makes me have a lot of opinions against [Tsai's Democratic Progressive Party]. That means the DPP is a political party without values," Ko told reporters. "I'm forming the party to give people another choice beyond 'blue' and 'green', not to destroy the 'blue' and 'green'."

In Taiwan, blue represents the KMT, while green is used to describe the DPP.

The latest polls show that Tsai has a narrow lead over her rivals. The president has an approval rating of 30.3%, followed by Han on 26%, with Ko and Gou (if they run independently) both under 20%, according poll published on Monday by My-formosa.com. But a Ko-Gou alliance would be supported by 28.2%, putting it within a whisker of Tsai. Ko, 59, used to be head of surgery at the National Taiwan University Hospital before entering politics and becoming Taipei mayor in 2014.

His harsh criticism of mainstream political parties and his unique personal style have helped him accumulate a strong social media following. He has more than 2.1 million Facebook followers, compared with Tsai's 2.4 million, Han's 870,000, and Gou's 420,000 followers.

In the 2000s, Ko supported pro-independence former President Chen Shui-bian. But after taking office in Taipei five years ago, he was criticized for shifting his cross-strait stance for saying that both sides of the Taiwan Strait belong to one family.

"[Embracing] the 1992-consensus or Taiwanese independence is not the core value of the party I'm forming," Ko said on Thursday. "Instead, it is the people, professions, and values," Ko said, declining to elaborate on his party's cross-strait policy.

The party will officially be founded on Tuesday next week, the day Ko turns 60 and also the birthday of Chang Wei-shui, an idol of Ko and one of the most important people in Taiwan's resistance movement during the Japanese colonial period.

Ko partnered with the pro-independence DPP in the 2014 mayoral election against KMT. But splits emerged, and the mayor recently said: "I really resent President Tsai. If she is doing her job well, then I don't even bother to think about whether I am running to be the next Taiwanese president."

Gou's campaign office said it was not aware that Ko was about to form a political party, and reiterated that Gou does not have the intention, as of now, to run as independent candidate.