Taiwan axes symbols of authoritarian past in push to rebrand 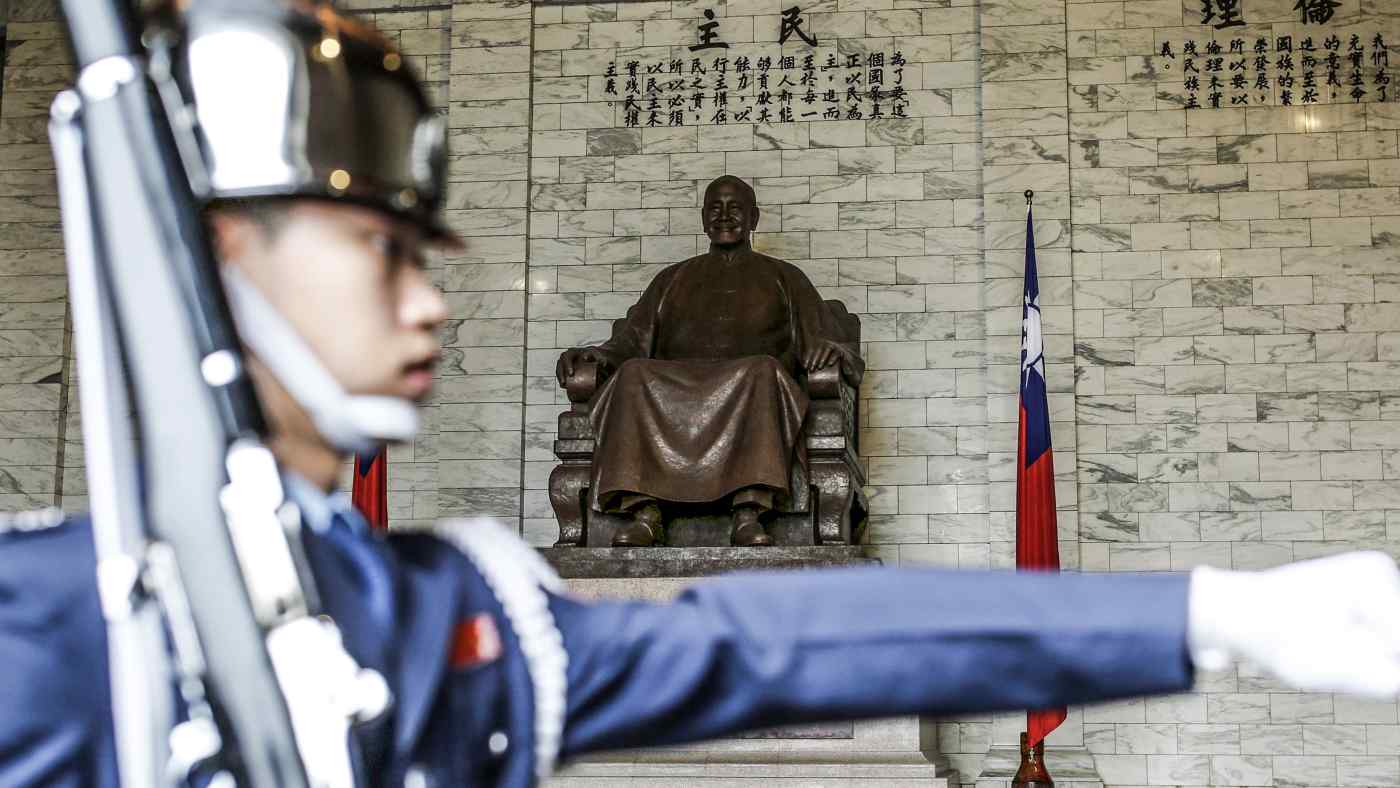 A military honor guard parade at the Chiang Kai-shek Memorial Hall in Taipei on March 16, 2016. Taiwanese authorities are considering removing the statue of the island's first president as part of a plan to to take down symbols its authoritarian past.    © Reuters
ERIN HALE, Contributing writerSeptember 26, 2021 12:38 JST | Taiwan
CopyCopied

TAIPEI -- Taiwan is undertaking a sweeping drive to remove all symbols of its authoritarian past in a bid to create a new global brand for the island.

The latest move is a plan to pull down a towering bronze statue of Chiang Kai-shek -- the generalissimo who ruled the Republic of China (Taiwan's formal name) with an iron fist from 1949 to his death in 1975 -- from an iconic central Taipei memorial hall dedicated to the former dictator. The step comes on the recommendation of the Transitional Justice Commission, which addresses crimes committed during the era of martial law, or "White Terror."

Thousands of such statues, once central to Chiang's cult of personality, have been axed across Taiwan over the past twenty years. But since taking power in 2016, President Tsai Ing-wen and her ruling Democratic Progressive Party have ramped up such efforts to distance themselves from the past.

With Taiwan being squeezed out of formal diplomatic space by an assertive China, the DPP has set out to rebrand Taiwan's international identity. Some moves may seem superficial, such as changing the name on its passport and Western consulates to emphasize the colloquial name of Taiwan and minimizing references to the ROC -- the baggage-laden name of China before Chiang's nationalist Kuomintang was forced to flee to the island from Mao Zedong's Communists in 1949.

"These changes are more radical and more systematic" than seen before, particularly over the last three years, said Adina Zemanek, a lecturer in Asia-Pacific Studies at the University of Central Lancashire. "It's building an image and building visibility for itself."

Zemanek said the DPP's recent launch of the online media outlet TaiwanPlus -- backed by the Ministry of Culture -- may have been one of its savviest yet as a way to reach greater audiences abroad. The pandemic also brought new opportunities for Taiwan to increase its visibility by supplying medical equipment under the slogans "Taiwan Can Help" and "Taiwan Is Helping," as well as the way the island has so far avoided mass COVID-19 casualties seen in other parts of the world.

On other fronts, the DPP has promoted Taiwan's Austronesian indigenous heritage at home and abroad, setting the island's historical narrative dramatically apart from China, and the ruling party also put Taiwan on the LGBT map as the first place in Asia to legalize same-sex marriage.

But, while many of these moves carry deep symbolic value at home and have registered with its regional neighbors, the DPP is still falling short of the kind of heavy lifting to change how Taiwan is seen globally.

Nation branding takes much more than a clever marketing campaign, Jose Torres, the CEO and founder of Bloom Consulting, whose clients include the Australian and Indonesian governments, told Nikkei Asia.

"The world doesn't know much about Taiwan. They only know that there's this island that is always in conflict with China and saying it's not Chinese, and technology. Those are the only two things associated with Taiwan and that's it, end of story. It's really reductive," Torres said. "The world doesn't have time to care unless you have something to say that concerns them."

Taiwan, he said, was still lacking a "big idea" with emotional resonance, and is not following through with government policies to create one. Torres pointed to New Zealand's rebrand as a sustainable nation, while Estonia has successfully branded itself as one of the world's top digital societies despite a population of just 1.35 million. 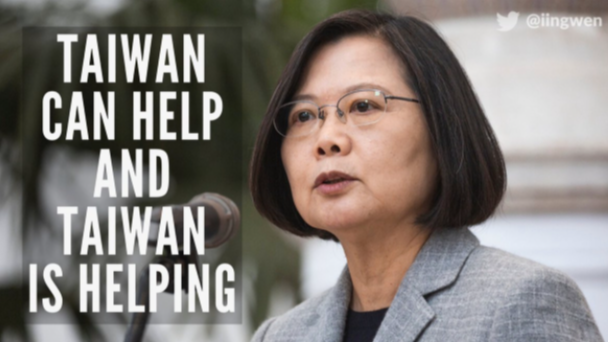 The pandemic also brought new opportunities for Taiwan to increase its visibility by supplying medical equipment under the slogans "Taiwan Can Help" and "Taiwan Is Helping." (Screenshot from President Tsai Ing-wen's Twitter page)

South Korea, which established a Presidential Council on Branding in 2009, is maybe the gold standard in Asia as a cultural exporter. The country's strong name-recognition helped it escape relatively unscathed from scandals such the 2016 impeachment and imprisonment of former President Park Geun-hye.

Therein lies the rub. As a place with a contested political status, Taiwan's historical narrative and national image is much more in flux than others. Over the past 70 years, its image has fluctuated from "Free China" to pariah state, to the middle ground between the U.S. and China, and the last bastion of traditional Chinese culture. The new image currently being carved out by Tsai and the DPP is an attempt to make Taiwan more than a sum of these historical parts.

Paradoxically, some of this reimagining might not have been possible if it were not for China, said Stefano Pelaggi, an adjunct professor at Sapienza University of Rome and Research Fellow at Taiwan Center for International Strategic Studies.

"Something really changed two years after the election of Tsai Ing-wen when the government realized there was not going to be any kind of dialogue with Beijing," he said. "There would be silence over the [Taiwan] Strait, so they tried to find their own voice which has been a voice of so many things together.

"I think it's doing really well on this matter and working on some cornerstone points which are really easy to use in Western countries, like LGBT rights, environmental issues, [its status as] a young firebrand democracy, and freedom of speech."

Much of this rebranding is thanks to the activists absorbed by the DPP after Taiwan's watershed 2014 Sunflower Movement -- a campaign by students and civic groups against a trade pact with China, said Adam Dedman, who researches Taiwan's soft power image as a PhD candidate at the University of Melbourne.

At that time, the party was languishing following the arrest of the first DPP president, Chen Shui-bian, and needed a face-lift.

"People often forget [Tsai] lost to [the KMT's] Ma Ying-jeou in 2012, and she had to rebrand herself after that," Dedman said. "The Sunflower Movement was a massive boon to the DPP. They didn't create it, but they harnessed it," leading Tsai to win the presidency in 2016 and secure a landslide victory as the incumbent in 2020.

It was many of these activists who have helped push the party forward into what it has become in 2021, and why it still resonates with most of Taiwan's younger voters, who will one day take the reins of power.

Despite Taiwan's shrinking population, the generation born after martial law ended has already come of age, while those born in 1996 when the island held its first presidential election are now in their 20s. Each year, more and more of Taiwan's citizens identify as "Taiwanese," as polling by the Election Study Centre at National Chengchi University continues to show.

Defining Taiwan's narrative, however, is only the first step. Getting everyone to cooperate will prove to be just as difficult, said Zemanek. Where central messaging was once directed through the Government Information Service, now the Ministry of Culture, the Ministry of Foreign Affairs, the Tourism Bureau and TaiwanPlus all have a say. A plurality of voices is to be expected in any democracy, but to achieve the kind of rebrand seen somewhere like South Korea, they will need to find a way to work together, she said.

"There are many sources constructing the image of Taiwan and though they all come from Taiwan they don't necessarily all overlap."