After four rocky years for Tsai, poll will decide future relationship with China TAIPEI -- The campaign for Taiwan's presidential election on Saturday has entered its final few days, with the three candidates holding a series of rallies across the island in last-ditch bids to secure support.

The election will be a key indicator of how Taiwan will decide its future relationship with China, the island's biggest trade partner, amid the trade war and an increasing number of countries switching their diplomatic allegiance to Beijing from Taipei.

Ahead of voting day, the secretaries-general of the two main parties -- the DPP and Kuomintang -- attacked the policies and actions of their rivals in interviews with the Nikkei Asian Review.

The DPP's Lo Wen-Jia said that Kuomintang had failed to address growing concerns among the Taiwanese public about Beijing's aggression, such as its goal to unite Taiwan with the mainland, and its handling of the Hong Kong protests.

"The Kuomintang's leaders and candidates' reactions and responses have been delayed and spotty in voicing strong concern about [Beijing's] 'one country, two systems' principle and it has failed to support Hong Kong's right to have a democratic system," Lo said. 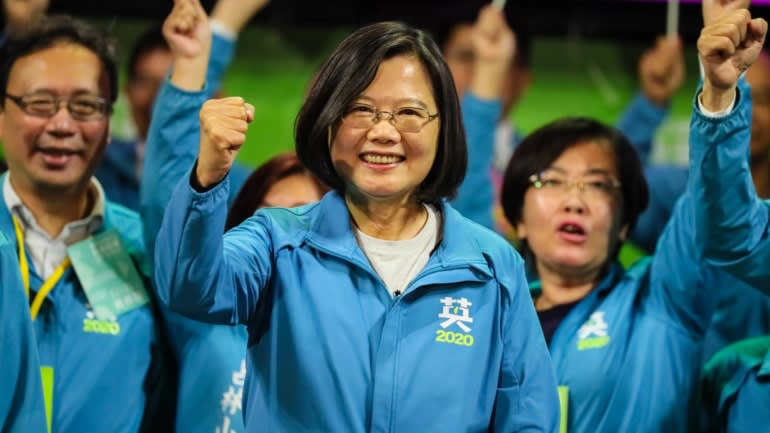 Taiwanese President Tsai Ing-wen speaks at a rally in Taipei on Jan. 5 (photo by Akira Kodaka)

Kuomintang's Tseng Yung-chuan said that the recovery of Tsai and the DPP after landslide local election defeats in late 2018 has nothing to do with any new reforms or policies.

"Its improving position in the election over the past few months comes from just monetizing Chinese President Xi Jinping's speech last January to facilitate unification with Taiwan, and attacking Kuomintang's position," Tseng told Nikkei. "And later the Hong Kong riots become another campaign weapon for them, which is totally misleading."

Ho Szu-yin, professor of the Department of Political Science of National Chengchi University, said that the election is playing out as it has in the past.

"For Taiwan's presidential election, the DPP always won on nationalism while Kuomintang always won on economic affairs," Ho said. "There are no exceptions." 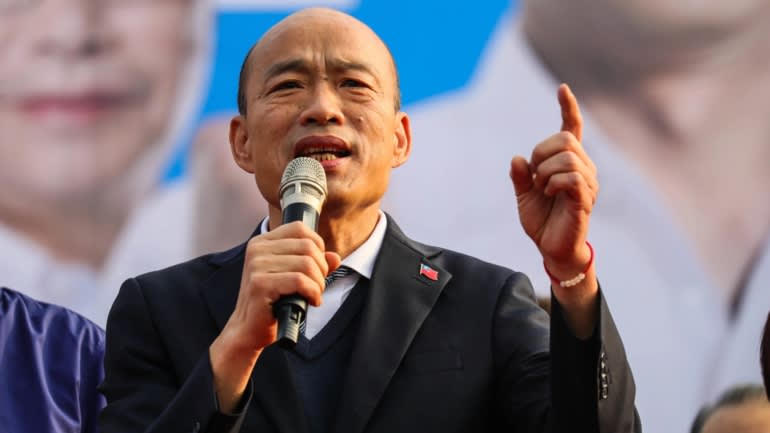 Kuomintang candidate Han Kuo-yu speaks at a rally in Taipei on Jan. 4. (Photo by Akira Kodaka.)

While Tsai is expected to win on Saturday, she has had a rocky four years in office.

Tsai won the presidency in January 2016, beating President Ma Ying-jeou, the then chairman of Kuomintang, two months after he met Xi in Singapore. After being inaugurated in May that year, Tsai launched Taiwan's "New Southbound Policy" in an attempt to forge stronger ties with Southeast Asian countries while reducing the island's reliance on China.

Beijing turned cold on Tsai and Taiwan. Under Chinese pressure, seven countries switched allegiance to Beijing from Taipei between 2016 and 2019, compared with just one during Ma's eight-year presidency.

On the domestic front, the Tsai administration initiated pension reforms for military veterans, public school teachers and civil servants, and introduced new rules to limit overtime. But there was a strong public backlash over the lack of communication on these major changes. Heated debate has also ensued over the DPP's push to legalize same-sex marriage and moves to increase the use of renewable energy and reduce reliance on nuclear power without offering solutions on deteriorating air pollution.

This mounting discontent led to a crushing defeat for the DPP in the November 2018 local elections, when the number of cities it held dropped to six from 13. Kuomintang, which seeks closer economic ties with China, won 15 of the 22 cities on the island.

Tsai resigned as party chairperson, while the Kuomintang landslide made Han, the new mayor of Kaohsiung -- formerly a DPP stronghold -- a political star. In January 2019, Xi used a speech to renew a call for unification with Taiwan, a democratic self-ruled island that China has long viewed as part of its territory -- an unpopular position among the general Taiwanese public. The police crackdown in Hong Kong on civilian protests raised further concerns about the "one country, two systems" principle. These two issues helped the DPP and Tsai regain popularity and present themselves as defenders of Taiwan's democracy.

The restructuring of the global supply chain stemming from the Washington-Beijing trade conflict has also benefitted Taiwan, with its economy outperforming Asian peers such as Japan, South Korea and Singapore. Many Taiwanese companies have moved some production back home from China, and the island's stock exchange rose more than 25% last year.

While the China factor gives Tsai the upper hand in the presidential election, her party is facing challenges in keeping its majority at the legislature. The rise of the smaller parties like Taipei Mayor Ko Wen-je's new Taiwan People's Party, Soong's People's First Party and the pro-independence New Power Party are expected to split the vote, making a hung parliament a distinct possibility.

Ko formed his party in August and is running candidates in the legislative election as he seeks to expand his political influence. Gou, who dropped his bid to run as an independent presidential candidate in September, is also teaming up with Ko and Soong to endorse legislative candidates.

Soong only announced he would run for the presidency in November. His participation is seen by political observers as luring some votes from pro-Kuomintang supporters who do not favor Han.