TAIPEI -- Voting ended in Taiwan's presidential election on Saturday, in a poll that will determine relations with mainland China and the direction of the island's export-driven economy over the next four years.

With votes counted in about 43% of polling stations across the island, Tsai had received about 58% of the vote, according to the commission. This put her ahead of Han Kuo-yu, mayor of the southern city of Kaohsiung and nominee of the China-friendly Kuomintang, on 38%. James Soong, the chairman of the People's First Party, had about 4%.

The island's legislature is also up for grabs. Tsai's DPP held 68 of the 113 seats in the Legislative Yuan before Saturday's election, while the Kuomintang had 35. Smaller parties had eight seats, and independents held the remaining two.

The Taiwan People's Party, formed by Taipei City Mayor Ko Wen-je in August, and other so-called third force parties may prevent either of the two major parties from claiming a majority.

Voting ended at 4 p.m. local time, with the outcome of the presidential race likely to be known later in the evening. There are no exit polls. Results for the legislative election will come in as each district is called, with about 30% of the seats being decided by proportional representation based on party lists.

Tsai, 63, and her ruling DPP reject China's intended "one country, two systems" framework for Taiwan, citing the unrest in Hong Kong as evidence that Beijing poses a threat to the island's democratic values.

Han, 62, and his party back the 1992 Consensus, which acknowledges Taiwan and the mainland as parts of "one China" but lets each side freely interpret what that means. Soong, 77, says maintaining the status quo is the best approach until China is "fully democratized." 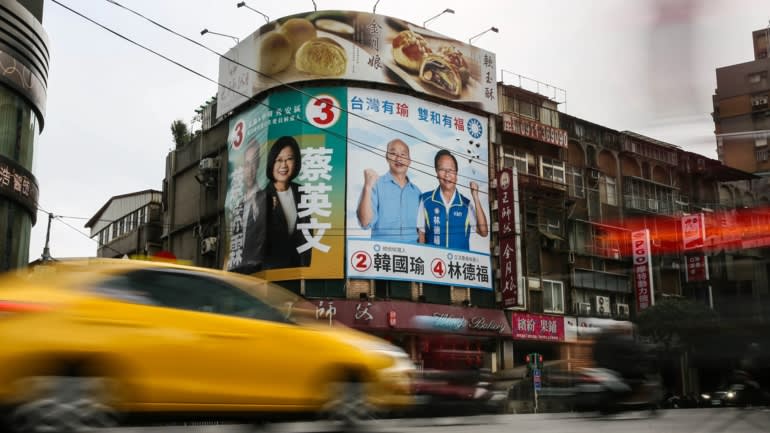 A giant poster of the two major presidential candidates appears on display in central Taipei. (Photo by Akira Kodaka)

Tsai's reelection bid may be helped by the prolonged trade tensions between Beijing and Washington, which have benefited the island's economy. Gross domestic product grew 2.91% in the July-September quarter, outperforming regional peers such as South Korea, Singapore and Hong Kong.

But the president has been criticized by opponents for losing seven diplomatic allies to Beijing since taking office. Taiwan now is formally recognized by 15 nations and jurisdictions.

She also has come under fire for pushing to cut generous pension benefits for public sector workers such as teachers and soldiers, and for seeking to make the island nuclear-free by 2025 without spelling out how air pollution will be mitigated. In addition, conservatives are angry at her over the legalization of same-sex marriage.

"President Tsai still has the upper hand to win, but the gap should not be as big as some predicted previously," said Chen Kuang-hui, a professor at National Chung Cheng University. "The DPP's strategy to promote nationalism against China's dictatorship and linking Hong Kong's situation with Taiwan has been effective in the presidential campaign."

The DPP's nationalism campaign appears to have appealed more to younger voters, while middle-aged people and seniors who experienced Taiwan's economic rise two or three decades ago are uninterested, Chen said.

"A big portion of support for Han is coming from reminiscence of the good old days of Taiwan's strong economic growth," the professor said. But Han, in turn, appears to have "failed to attract and convince the younger generation to vote for him." 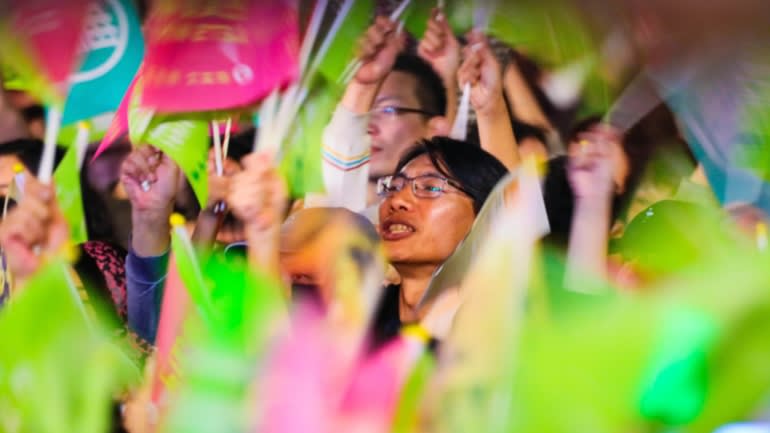 Supporters of Taiwan President Tsai Ing-wen on Friday evening at her final rally in Taipei before Saturday's vote. (Photo by Akira Kodaka)

The two leading candidates held large rallies near the presidential office in Taipei on Thursday and Friday. They were joined by local lawmakers from across the island, as well as a host of supporters.

The gatherings showed the clear demographic and ideological divide between the two main parties.

Han's rally was attended by many middle-aged and older people, a lot of whom waved the flag of the Republic of China, Taiwan's formal name -- a symbol of the island's historical connection to the mainland.

Meanwhile, the crowd at Tsai's event was notably younger, and supporters waved pastel-shaded pink and green banners. Not a single ROC symbol was on display, and some even held up the Stars and Stripes.

Before Tsai appeared, Premier Su Tseng-chang rattled through a series of slides on a big screen behind him that included economic achievements under Tsai and stark images of the Hong Kong protests.

Tsai said that the whole world, especially Hong Kong's younger generation, was watching Taiwan's election and whether the island could stay democratic.

Lucy Huang, a trading company owner in her late 30s, was at the rally with friends who she said carried American flags at DPP rallies across the island.

"The U.S. shares the same values as us," Huang told the Nikkei Asian Review. "It's the symbol of freedom and democracy. Also, the U.S. is the strongest fighter against the expansionism of Chinese communists."

"Tsai is the best defender of Taiwan's sovereignty," she added. "All of her predecessors dared not tell China that Taiwan can decide its own future." The Kuomintang claimed that 1 million people attended Han's final rally in the capital on Thursday evening. While their supporters came out in larger numbers than DPP backers, the figure appears exaggerated.

Han launched into an attack on Tsai and the DPP as he stood among a crowd of mayors and other senior party figures -- as well as a young female lawmaker who led the chanting in a Wonder Woman-style outfit.

"We gave the DPP a chance and thought it would bring happiness," Han said. "But the DPP is no longer the DPP it used to be. The DPP is not a pure little rabbit, but a big bad wolf.

"Taiwan's freedom and democracy have no room for retreat," he continued. "Tsai, who has been president for three and a half years, has never dared to say she is proud of the Republic of China."

A woman who gave her surname as Huang said she returned from Canada to vote.

"I came back because I love the Republic of China," she told Nikkei. "Tsai did not do well at all, and this time we must not let her get reelected."

Lee Hong-yuan, a former interior minister under previous Kuomintang President Ma Ying-jeou, told Nikkei that his party is a safer pair of hands than the DPP, and that Taiwan should look to China to boost its economy.

"The KMT are more academic and more professional than the DPP," said the 63-year-old Lee, a professor in the department of civil engineering at National Taiwan University. "The DPP looks to please people rather than do the right thing. The DPP are only after popularity. The status quo with China is our priority, and we don't want to create a war. The DPP has provoked China because it has a misconception that China is going to unify us."