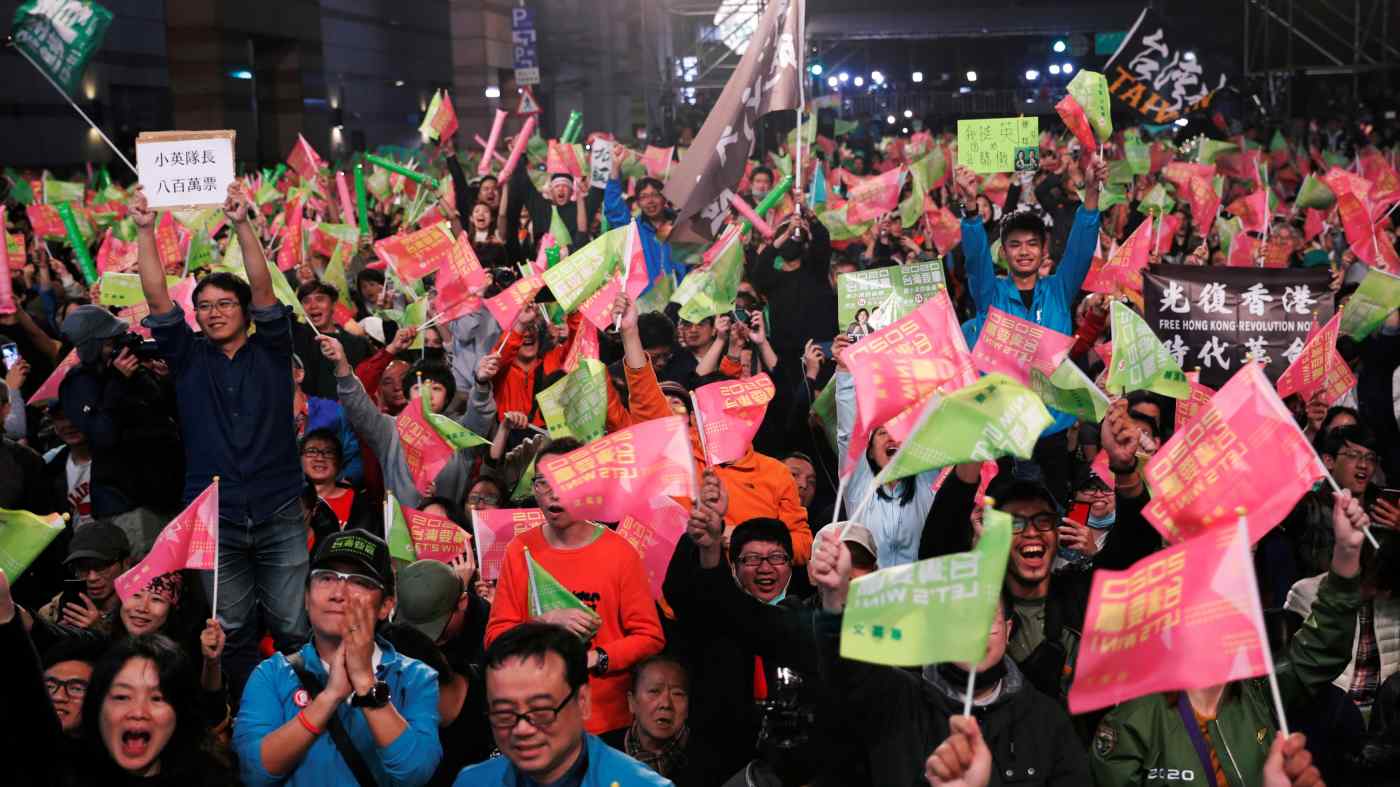 TOKYO -- Taiwan leapfrogged Japan and South Korea to become the highest ranked democracy in Asia, according to a new report by the Economist Intelligence Unit.

A successful election last year and a series of positive political and legal improvements in recent years propelled Taiwan to 11th spot globally in the Democracy Index 2020 report -- a leap of 20 places from a year earlier.

The island was upgraded to a "full democracy" from a "flawed democracy" for the first time since the index was first produced in 2006. The EIU noted that Taiwan's elections "demonstrated the resilience of its democracy at a time when electoral processes, parliamentary oversight and civil liberties have been backsliding globally."

While Taiwan overtook Japan and South Korea, both of those countries regained their status as a "full democracy" after six years due to an improvement in public confidence in their governments.

Democracy and freedom around the world faced unprecedented challenges in 2020 amid the COVID-19 pandemic. The quarantine and lockdown measures imposed by the Chinese authorities on more than 11 million people in the city of Wuhan, the original epicenter of the pandemic, were unthinkable to democracies at first, but were eventually adopted by many countries as the crisis worsened. This was at the huge expense of individual freedoms and civil liberties and led to a record low global average score of 5.37 (on a 0-10 scale). Asia and Australasia fared only slightly better with an average score of 5.62, though the wide gaps remain between the region's five full democracies and seven authoritarian regimes including China and North Korea.

"The rise in Taiwan's ranking was mainly driven by higher scores in the functioning of government and the political culture," said Kai-ping Huang, a political science assistant professor at the National Taiwan University and a core member of the university's Hu Fu Center for East Asia Democratic Studies, referring to two of the five categories evaluated by the index. The other three categories are electoral process and pluralism, political participation and civil liberties.

"Taiwan did a better job in containing the pandemic than most other countries including Japan and South Korea. That explains its good score in the functioning of government," she said.

Regarding the hike in political culture score from 5.63 in the 2019 index to the current 8.13, Huang noted that Taiwanese President Tsai Ing-wen has enjoyed growing support since she clashed with Chinese president Xi Jinping by saying the island would not accept a "one country, two systems" arrangement with Beijing in early 2019.

"Before 2019 the people in Taiwan did not especially support the democratic system," said Huang. "But since 2019, the majority of the public saw Hong Kong's problems, which highlights the importance of Taiwan's system." Hong Kong continued its downward spiral and slipped to 87th in the 2020 index, lagging behind countries like Bangladesh and Senegal. More significantly, the former British colony was relegated to a "hybrid regime" from a "flawed democracy," after a national security law was passed last June eroded the city's political freedom and judicial independence. About a hundred pro-democracy politicians, activists and supporters have been arrested under this law.

The EIU report reconfirmed the correlation between Taiwan's gain and Hong Kong's loss in the democracy front. "Taiwan's staunch commitment to upholding democracy was undoubtedly influenced by the political turbulence in Hong Kong and the erosion of democratic freedoms in that territory," it said.

Elsewhere in Asia, Myanmar's score dropped to its lowest since 2013 even before the recent coup was taken into account. Thailand regressed but retained its status as a "flawed democracy" the country earned last year, as massive anti-government protests led by students went on for months demanding a more democratic constitution. In India, the increasing influence of religion under Narendra Modi's premiership fueled anti-Muslim sentiment, resulting in the country's lowest democracy score ever.

Across the ocean, U.S.'s score was also down marginally at 7.92, due to a number of weaknesses in the country's political life including "low levels of trust in institutions and political parties" and "a degree of societal polarisation that makes consensus on any issue almost impossible to achieve," according to the report.