Taiwan presidential hopefuls head to US for 'job interviews' 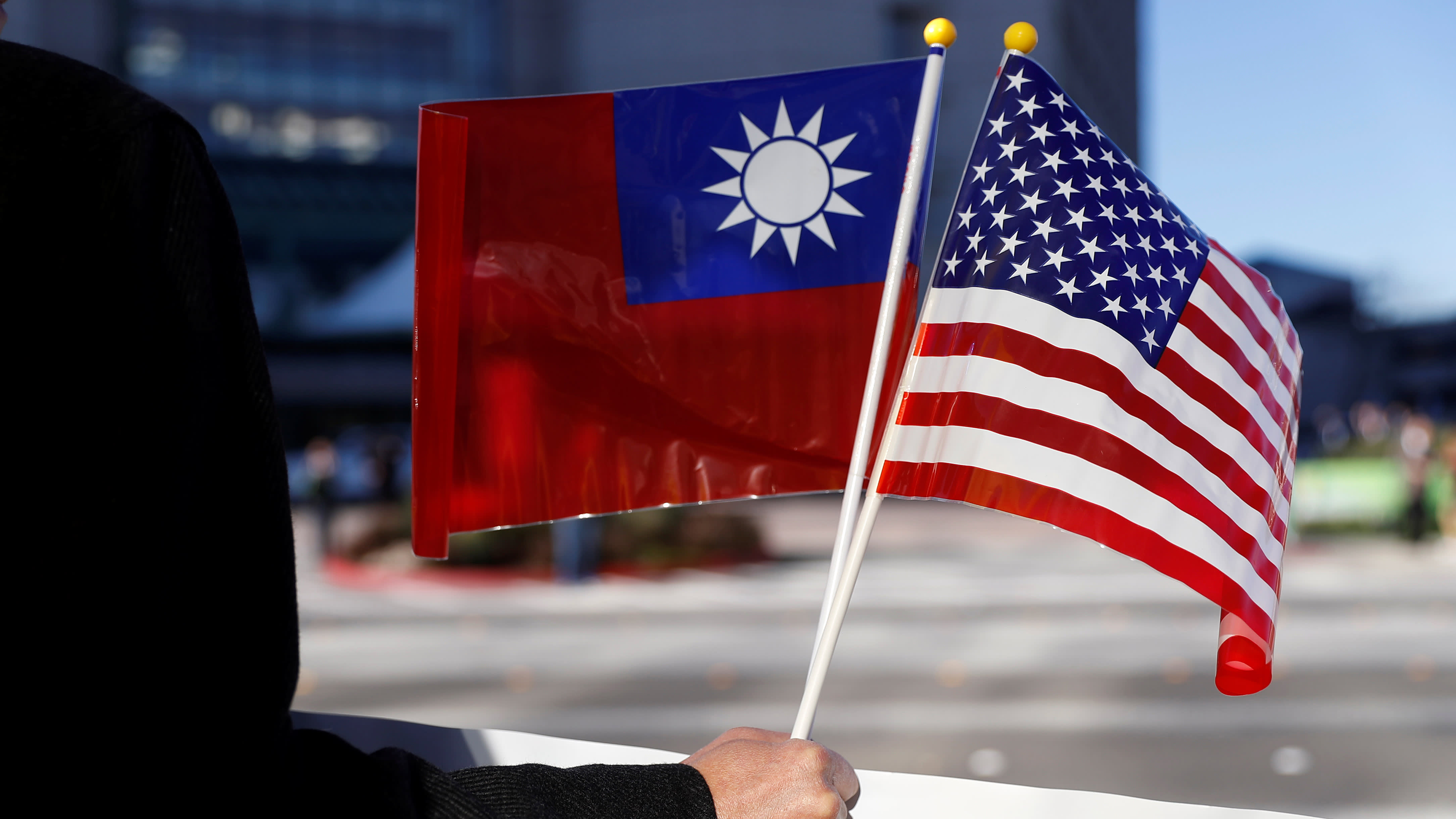 TAIPEI -- Contenders for Taiwan's presidency are heading to the U.S. this year to prove their mettle across the Pacific before the island's January 2020 election.

It has long been a tradition for Taiwan's presidential hopefuls to visit America in the year preceding an election. While they speak at universities, business associations, think tanks and gatherings of Taiwanese expatriates, their schedules often include undisclosed closed-door talks with top-ranking government officials.

Analysts say these meetings are often with Congressional members and their aides, as well as with officials in key U.S. government agencies such as the State Department, Department of Defense, Department of Commerce and the National Security Council.

Political analysts and local media dub the trips "job interviews," with candidates aiming to demonstrate to both Washington and voters at home that they can keep relations with America on a solid footing. But the trips also provide a way to gauge Beijing's reaction to their stances on cross-strait ties -- always a sensitive topic but especially so this year as the island's strategic importance grows amid the U.S.-China spat over trade, technology and diplomacy.

The first visitor is Eric Chu, former leader of the China-friendly opposition Kuomintang, or KMT. The former mayor of New Taipei City is currently on an eight-day trip to the West Coast, where he has visited Apple, Tesla, Nvidia, YouTube and other tech giants.

In a speech to students at Stanford University, California, on Tuesday, Chu stressed the need for Taiwan to strike a balance between China and the U.S.

"As Taiwan is stuck in the middle between the U.S. and China, we will continue our commitment to peace," Chu said. "We are against any forms of 'war mentality.' It is our shared responsibility to manage the tension within a benign level ... we will continue to cooperate with both Washington and Beijing in creating a more responsible and sustainable economic order." Rising political star Han Kuo-yu -- the new mayor of Kaohsiung in southern Taiwan who helped the KMT to victories in local elections last year -- plans to travel this spring to the East Coast to deliver a speech. Current Taipei Mayor Ko Wen-je, an independent, will also head stateside next month. He denied it was a "job interview" when asked by reporters, with his office saying it was to focus on city-to-city exchanges.

In the ruling Democratic Progressive Party, former Premier William Lai and Taoyuan Mayor Cheng Wen-tsan have been cited by local media as planning visits this year. Premier Su Tseng-chang said he has not ruled out a trip. Foreign Minister Joseph Wu said recently that many members of the U.S. Congress support Taiwan and hope to invite President Tsai Ing-wen, who on Tuesday told CNN she would seek reelection.

"The timing of Taiwanese politicians' U.S. trips is more important than ever," Pan Chao-min, a professor at Tunghai University's Graduate Institute of Political Science in Taiwan, told the Nikkei Asian Review. "The island's strategic value to Washington has increased amid the trade and power showdowns between the U.S. and China."

"For Washington, it is crucial to know if these [presidential hopefuls] can endure mounting pressure from China and ensure U.S. interests in the Indo-Pacific region," Pan said.

The American Institute in Taiwan, the U.S.'s de facto embassy in Taipei, supports the visits.

Another reason for the trips is to gain domestic media exposure in hopes of building support before announcing a run in the primaries. Neither the KMT's Chu or Han have been officially anointed by the party as candidates, nor has Ko explicitly expressed his intention to run.

Han had the highest approval rate for the 2020 election in a poll published Wednesday by Apple Daily, Taiwan's largest newspaper. The Kaohsiung mayor scored 35.1%, putting him ahead of Taipei Mayor Ko at 28.6% and Tsai at 22%. 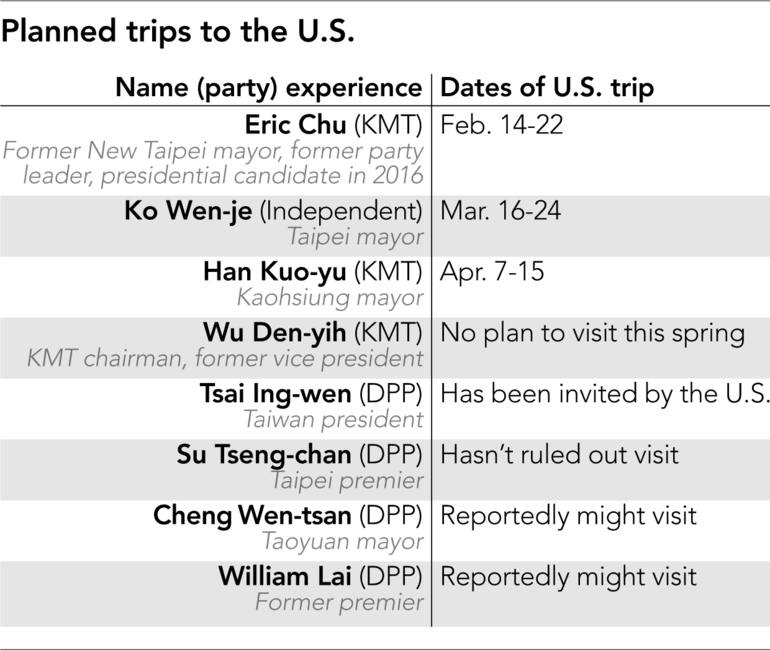 Tacit U.S. support for candidates will be important as Taipei faces increased pressure from Beijing over reunification.

China views Taiwan as a wayward province that should not be recognized internationally as a separate political entity. But Taiwan has shown scant acceptance to being ruled by Beijing ever since Chiang Kai-shek and his Nationalists fled to the island in 1949 after losing a civil war to the Communists.

Importantly, Beijing has also not ruled out the use of force to take over the island.

China sees Tsai and her Democratic Progressive Party as strong defenders of Taiwan's independence -- a stance unacceptable to Beijing -- and has turned up the heat on the president since she took office in 2016. Beijing has withheld tourist visas, forced foreign airliners to list Taiwan as part of China, and is using its massive economic clout to win over the island's few remaining diplomatic allies.

Cross-strait relations were strained further last month when the presidents of China and Taiwan ramped up rhetoric on the sovereignty issue. China's President Xi Jinping reiterated a call for reunification, with Tsai retorting that the island would not accept Beijing's "one country, two systems" principle. Rising political star Han Kuo-yu -- the new mayor of Kaohsiung in southern Taiwan -- had the highest approval rate for the 2020 election in a poll published Wednesday.   © Reuters

Beijing is closely monitoring the visits, examining each entourage to see how Taiwan's power players are aligning themselves.

Ross Darrell Feingold, a lawyer and consultant with over 20 years of experience advising clients on cross-strait relations, said coverage of the visits in the U.S. and Taiwan will help Beijing prepare for how the policy debate over three-way ties might be framed in the coming months.

In light of the highly fluid U.S.-China-Taiwan dynamic, Feingold said China may react differently this year.

This could manifest in "stronger language to criticize U.S. officials for meeting the candidates, or public criticism of the Kuomintang candidates or Mayor Ko if China dislikes what these candidates say about China-Taiwan relations," he said.

Not all the potential candidates, however, are planning to cross the Pacific. KMT Chairman Wu Den-yih said recently he turned down invitations to visit the East Coast.

"Unlike others who can leave [Taiwan] and be the current topic of media, I have other more pressing responsibilities," such as handing the party's primary election, Wu recently told reporters.