Chiu Tai-san, minister of Taiwan's Mainland Affairs Council, told reporters online that Taiwan would maintain its presence in Hong Kong by making certain immediate "adjustments." It was unclear what that would entail.

His comments came after several Taiwanese personnel at the Taipei Economic and Cultural Office in Hong Kong were required to leave the Chinese-ruled city over the weekend after refusing to sign a paper acknowledging Beijing's principle that there is only "one China," apparently in exchange for visa renewals.

Despite the row, Taiwanese services such as issuing visas, accepting applications for visits by Hong Kong citizens, promoting trade, culture and tourism, and arranging student exchanges are set to continue. Indeed, on Monday morning, Taiwan-affiliated offices in Hong Kong appeared to be operating as usual.

A woman working at a visa office told Nikkei Asia that there had been "no influence" on services, while a staff member at a trade office also confirmed operations were unaffected.

Still, Chiu condemned the demand that staffers sign the "one China" document, saying the 2011 agreement governing relations includes nothing of the sort. The deal led to the opening of unofficial platforms to enhance cooperation and positive interactions between the two sides. China considers Taiwan a breakaway province. According to the Taiwan side, Hong Kong started pressing incoming Taiwanese officials to sign the pledge on "one China" in November 2018 as a condition for visa issuances. Taipei has refused to comply all along.

"We have never agreed on attaching any political preconditions," Chiu said.

Asked to comment on Monday, Hong Kong's government did not directly address Nikkei's question on whether a "one China" commitment existed in the 2011 agreement, but it criticized Chiu's comments as "confusing the cause and the effect" and "confounding the right with the wrong."

Taiwan's stance on maintaining its operations in the Chinese territories contrasts sharply with Hong Kong authorities suddenly closing their Taipei office last month. At the time, a Hong Kong spokesperson said in a statement that Taipei had "grossly interfered in Hong Kong's affairs on repeated occasions and created irretrievable damage" to the relationship. The statement cited Taiwan undertaking a project to accept Hong Kong citizens after Beijing imposed a strict national security law on the city last summer.

Hong Kong's statement even made a rare mention of the controversial "1992 Consensus." This ambiguous understanding held by the Communist Party and the Taiwanese opposition Kuomintang refers to the idea that both sides of the Taiwan Strait are part of "one China," but leaves room for each side to interpret what that means.

Taiwan's ruling Democratic Progressive Party does not acknowledge the consensus. 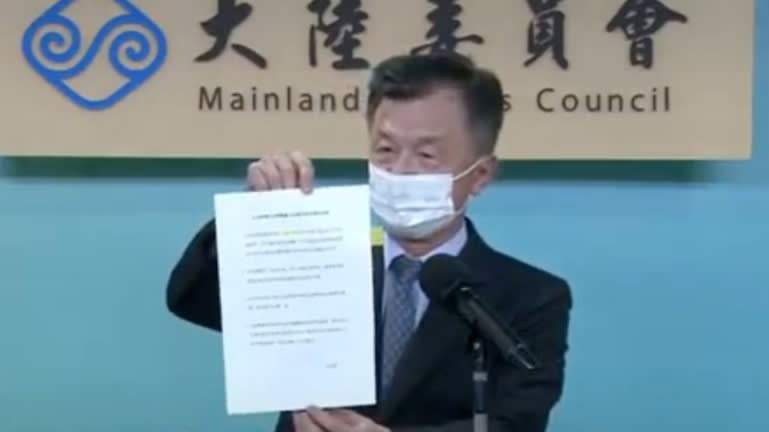 Macao's government followed suit this month, abruptly withdrawing from Taipei without providing a reason. Macao and Taiwan had also opened their mutual offices in 2011.

Macao's sudden closure came right after China made its biggest-ever display of military muscle against Taiwan, sending 28 aircraft including fighter jets and nuclear-capable bombers into Taiwan's air defense identification zone. Meanwhile, the Chinese Communist Party is gearing up for massive celebrations of its centennial, as well as the 24th anniversary of the Hong Kong handover from the U.K.

Chiu on Monday confirmed that all Hong Kong personnel in Taiwan had left. Two Macanese officials remain at the moment, but both offices have closed, he said.

Five Taiwanese personnel are in Macao, Chiu said. One has a visa due to expire on Sunday, while the longest visa among the personnel runs until October 2022.

Even as Beijing intensifies political pressure, economic and human interactions between Taiwan and Hong Kong are deep and widespread.

Passenger flights connecting Hong Kong and Taipei were the busiest among all international routes in 2019, in terms of capacity, before the coronavirus upended air travel. About 22,000 seats were provided per day, according to OAG Aviation Worldwide.

Hong Kong's trade statistics show that the territory imported 405.69 billion Hong Kong dollars ($52.3 billion) worth of goods from Taiwan last year, making the island its second-largest supplier behind only mainland China. Hong Kong exported HK$4.91 billion to the self-governing island, its third-ranked destination after mainland China and the U.S.

The political tensions increasingly overshadow such links, however.

"Poor diplomatic ties between the governments are likely to impede healthy commercial relations and complicate business exchanges," A2 Global Risk said Monday. The London-based consultancy further warned: "Businesses with interests in greater China should assess the impact of worsened bilateral relations on strategy and operations."