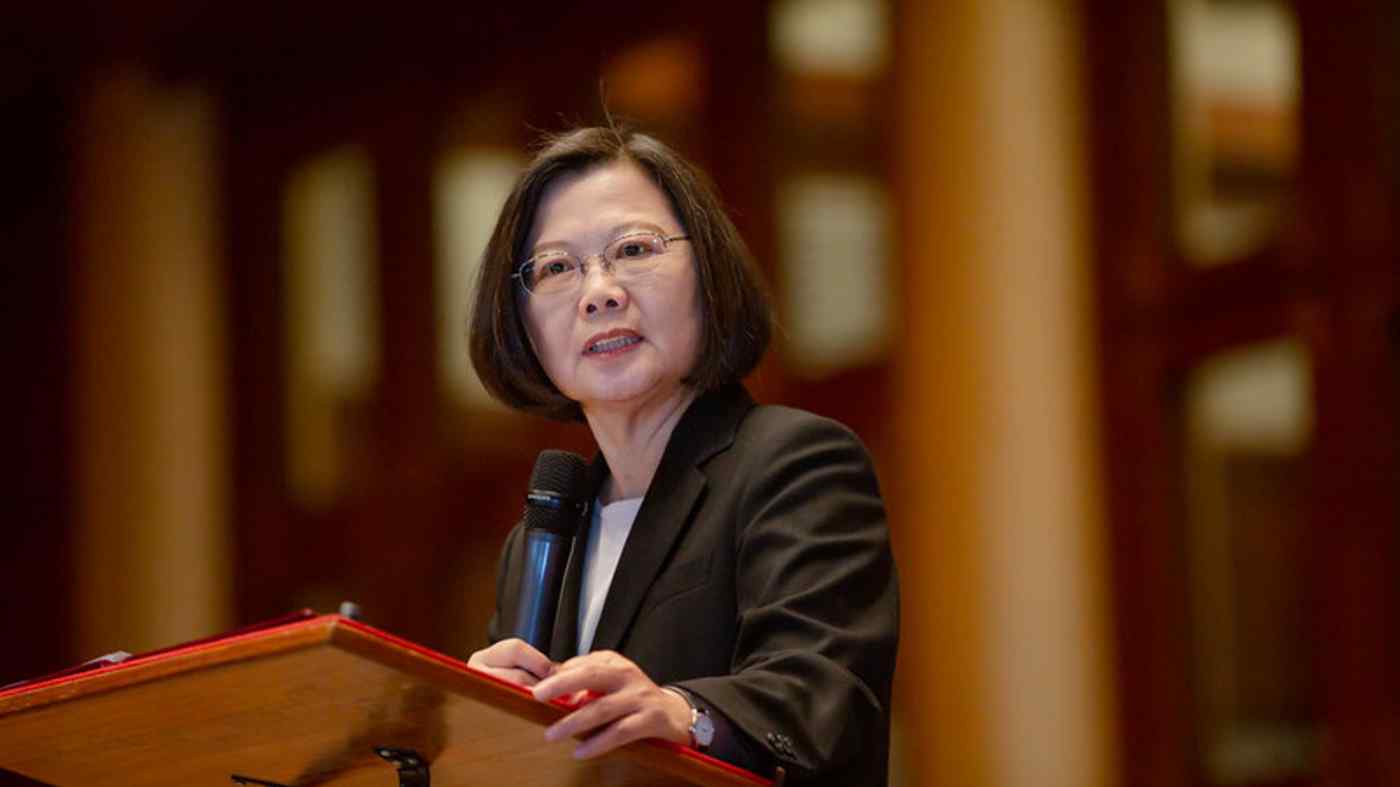 Taiwanese President Tsai Ing-wen has seen a surge in approval ahead of elections. (Photo courtesy of the Office of the President)
KENSAKU IHARA, Nikkei staff writerNovember 20, 2019 07:17 JST | Taiwan
CopyCopied

TAIPEI -- Younger voters have propelled Taiwanese President Tsai Ing-wen's dramatic comeback in the polls ahead of the January election, rallying behind the independence-leaning leader amid escalating turmoil in Hong Kong.

Support for Tsai totaled 40.5% in a poll published by news site My-formosa.com on Nov. 16, placing her 13 percentage points ahead of Han Kuo-yu, the nominee for the pro-Beijing Kuomintang. Tsai had trailed the Kaohsiung mayor by 20 points back in February.

Her turnaround is driven largely by a growing wariness toward mainland China.

In January, Chinese President Xi Jinping raised the possibility of uniting Taiwan with the mainland under the "one country, two systems" framework applied to Hong Kong and Macao. But as the clashes between protesters and police escalate in Hong Kong, many Taiwanese fear that their island could face a similar future. A concert in support of the Hong Kong demonstrations gathered many in Taipei on Nov. 17. (Photo by Kensaku Ihara)

"I have defended freedom and democracy under massive pressure from China. Let's bring another victory to Taiwan," Tsai told tens of thousands of supporters at a rally on Nov. 17.

The Democratic Progressive Party candidate and her running mate, former Premier William Lai, officially registered to run on the afternoon of Nov. 19.

The monthslong Hong Kong demonstrations resonate with Taiwan's younger generations in particular. A concert on Nov. 17 in central Taipei to support the protesters drew a large crowd, and some attendees carried signs urging voters to pick Tsai in the presidential race.

Tsai won the presidency in 2016 thanks to momentum from the 2014 Sunflower Movement, in which students and activists occupied Taiwan's legislative chamber to protest a service trade agreement with the mainland.

Disillusionment over Tsai's cross-strait policies drove some of her supporters away, and her approval ratings fell to around 20% in November 2018 when her party suffered a crushing defeat in local elections. But younger voters appear to be gravitating toward her again.

The Kuomintang initially dismissed Tsai's recent rise in the polls as a temporary phenomenon. But the party now is scrambling to downplay its pro-Beijing leanings. Han on Nov. 14 urged Xi to grant democratic elections for Hong Kong -- one of the protesters' key demands.

Han has dubbed himself the "commoner president," and the former grocer attracted voters frustrated by Taiwan's growing income gap. But recent reports that Han profited from luxury condo investments have left him struggling to gain more support.

Instead, James Soong of the mainland-leaning People First Party is gaining momentum. Though Soong's support still stands at just 10%, his campaign is expected to receive backing from Terry Gou, the former chairman of Foxconn, the massive Taiwanese electronics contract manufacturer. Gou himself had sought the Kuomintang presidential nomination.

Soong and Gou likely will attack the dominance of the two big parties on Taiwanese politics, aiming to win over independent-minded voters.

"Tsai's lead over Han will narrow if Soong takes the political independents, who are leaning toward Tsai," said Pan Chao-min, a Tunghai University professor.

The outcome of Taiwan's presidential race also could impact relations between the U.S. and China. Beijing has exerted economic pressure on Tsai, such as by banning traveling to Taiwan in August, in hopes of boosting mainland-friendly candidates.

Taiwan's presidential election will be held Jan. 11. The winner's term begins May 20.