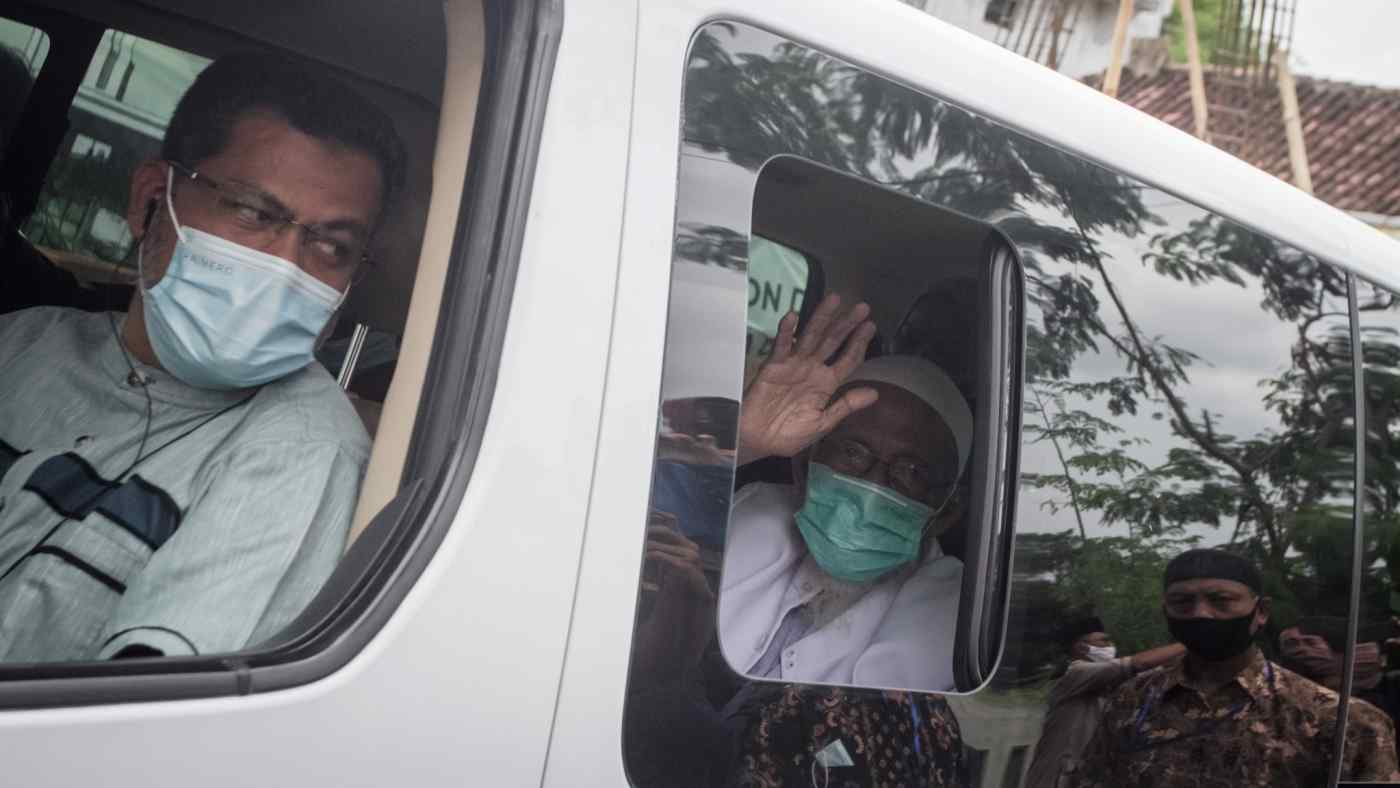 Islamic cleric Abu Bakar Bashir, an alleged mastermind of the 2002 Bali bombings, waves from a car as he arrives at a boarding school on Jan. 8 upon his release from prison.   © Reuters
January 8, 2021 23:17 JST | Indonesia
CopyCopied

Bashir, 82, who was never convicted of a direct role in the bombings, would enter a deradicalization program amid concerns over his continued influence in extremist circles, authorities said.

Photographs showed him dressed in white and wearing a mask as he left the prison in Bogor, south of the capital, Jakarta, before being driven to his home at an Islamic boarding school near the city of Solo in Central Java.

Bashir, who is regarded as the spiritual leader of Jemaah Islamiah, a jihadist network with ties to al Qaeda, was imprisoned in 2011 for 15 years for his links to a militant training camp in Aceh province.

After periodic cuts in his jail term, he served 10 years.

Police and intelligence agencies say Bashir was linked to the 2002 Bali attacks and a 2003 attack on the J.W. Marriott hotel in Jakarta, but he was never convicted of direct involvement and denied any ties.

A conviction for being part of a conspiracy to carry out the Bali bombings was later overturned.

The Bali bombings killed 88 Australians and the country has pressed Indonesia to ensure Bashir does not incite more violence.

Australian Prime Minister Scott Morrison said Bashir's release was "very distressing to the friends and families of the Australians, the 88 Australians, who were killed in the Bali bombings".

Thiolina Marpaung, an Indonesian wounded in the 2002 attacks, said she wanted authorities to keep supervising Bashir.

"We don't know what he was doing in prison," she said by telephone.

Bashir pledged allegiance to the militant group Islamic State in 2014 while in jail.

Abdul Rohim, Bashir's son, said his father would rest up at home at the Al Mukmin Islamic boarding school, which Bashir founded in the 1970s and whose graduates have been linked to militant networks and attacks.

He added that the family would try to distance itself from an ideology considered "extremist ... whether it is Islamic State or other groups".

A spokesman for the Coogee Dolphins rugby club in Sydney, which lost its president and five members in the Bali attacks, said Bashir's release would be difficult.

"Some will never forgive, there will be others who will be just angry today," said Albert Talarico.

"Others will stay silent because they don't wish to have the old wounds opened again."

Some Indonesians defended the release of the cleric, saying he had served his time and was a practicing Muslim.

"There are many people who discredit Muslims, thinking that we are related to terrorism, but ... we are not," said Asqar Kustiwa, 63, a resident of Depok, near Jakarta.

Bashir will undergo a deradicalization program, Eddy Hartono of Indonesia's anti-terrorism agency said in a statement, adding that he hoped the cleric "can give peaceful, soothing preachings".

In the wake of the Bali attacks, Indonesia set up an elite anti-terrorist unit that weakened JI and resulted in scores of suspected militants being arrested or killed.

But other extremist groups have been formed and conducted attacks in the world's biggest Muslim-majority country. Police arrested 23 militants only last month.

Bashir does not wield as much power over JI or other groups, observers say, but he could still have influence.

"Bashir is an ideologue," said analyst Stanislaus Riyanta. "His words will be followed and made examples of."