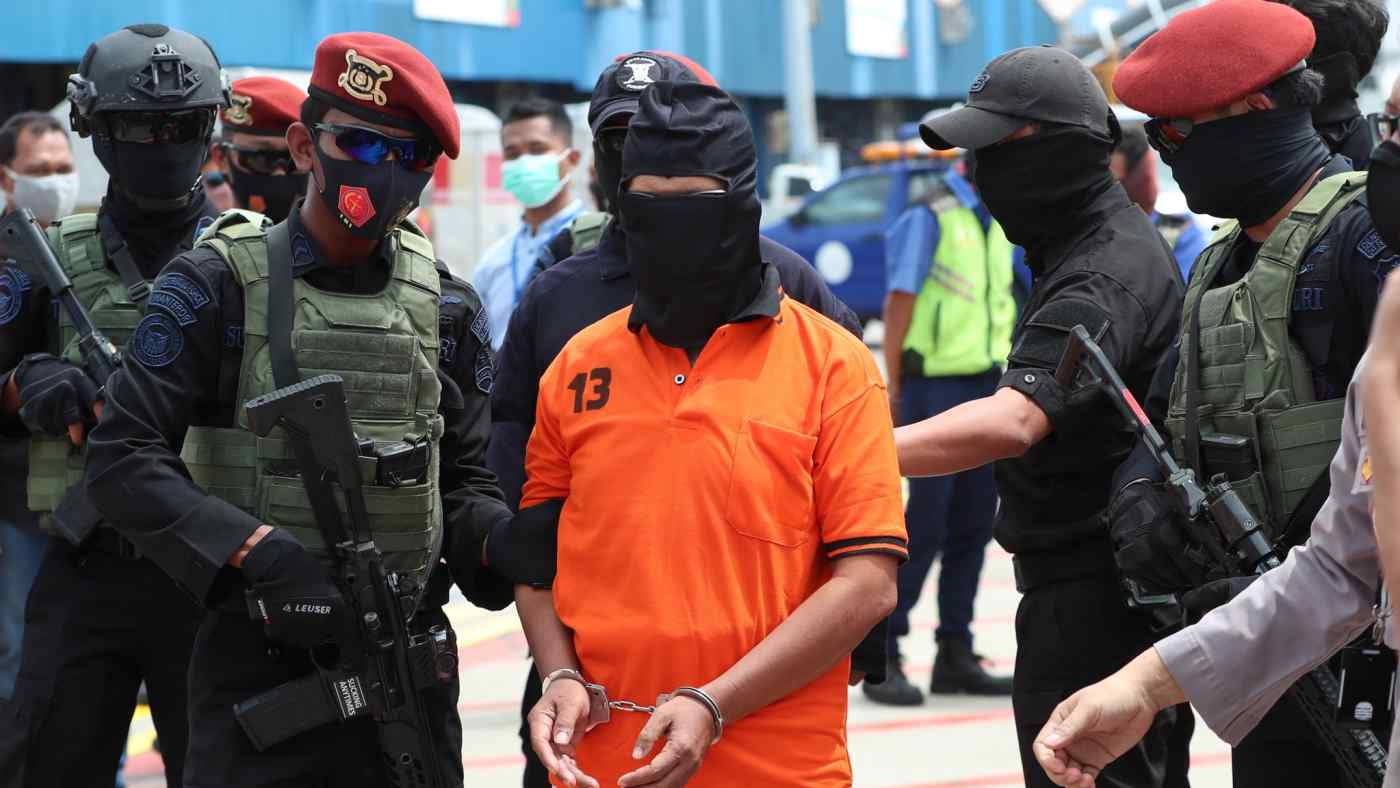 Indonesian police in December 2020 escort suspected militant Zulkarnaen, who is alleged to have been involved in the making of bombs used in a series of attacks, including the 2002 Bali bombings.   © AP
KOYA JIBIKI and YUICHI SHIGA, Nikkei staff writersAugust 31, 2021 01:42 JST | Southeast Asia
CopyCopied

JAKARTA/MANILA -- Law enforcement agencies in multiple Southeast Asian nations are on high alert against terrorist groups potentially emboldened by the Taliban's takeover of Afghanistan and a deadly Islamic State attack at the Kabul airport.

In Indonesia, the national police's counterterrorism detachment known as Densus 88 began monitoring social media and other sources for Taliban sympathizers.

Indonesia, home to the world's largest Muslim population, has a constitutional guarantee of religious freedom for minority faiths. But the country is no stranger to terrorism, with extremist groups seeking to impose Islamic law. Authorities fear a spillover effect from instability in Afghanistan.

Hours before extremist group ISIS-K launched the suicide attack against the airport in Kabul, Foreign Minister Retno Marsudi met Thursday with senior Taliban official Sher Mohammad Abbas Stanekzai in Doha to urge that Afghanistan "does not become a breeding ground for terrorist organization and activities," the minister tweeted. Indonesia later denounced the attack, which killed 13 U.S. military members and scores of Afghans.

"There are groups in this country who sympathize with the Taliban," Boy Rafli Amar, the head of Indonesia's National Counterterrorism Agency, warned on Aug. 19, pledging to bolster surveillance.

His comments came after a meeting with Mayor Gibran Rakabuming Raka of the city of Surakarta, also known as Solo. The city is associated with Abu Bakar Ba'asyir, the spiritual leader of the Southeast Asian extremist group Jemaah Islamiyah. Gibran is the eldest son of Indonesian President Joko Widodo.

Foreigners have often been a target in terrorist attacks. In 2002, Jemaah Islamiyah carried out bomb attacks in Bali that killed over 200 people. More bombings targeted Marriott and Ritz-Carlton hotels in Jakarta in 2009.

Jemaah Islamiyah members received military training in Afghanistan during the 1990s, and the group is alleged to have ties to al-Qaida. Indonesian police have also been keeping close watch on Jamaah Ansharut Daulah, a local group that pledges allegiance to ISIS.

In the Philippines, Defense Secretary Delfin Lorenzana, noting the Kabul attack, said his country is constantly on the watch for homegrown extremist groups.

"Taliban or no Taliban, we have always considered local extremism as a big concern," Lorenzana told the Philippine News Agency. "Afghanistan is not the only country that could provide encouragement or inspiration to local terrorists."

The Philippines has entered into information-sharing agreements with neighbors Indonesia and Malaysia to guard against terrorist activities, Lorenzana added.

Muslims make up only about 6% of the Filipino population in what is a majority Christian country. But in the southern island of Mindanao, some Muslims aspire to establish their own independent state. Armed militants have battled the government for nearly half a century.

In 2017, the government carried out a five-month military operation following an attack on Marawi, a city in Mindanao, involving the extremist group Abu Sayyaf. More than 1,100 people died on both sides.

About 200 members of terrorist groups are still lurking in Mindanao, according to a senior military official. Law enforcement agencies think the terror groups are unlikely to regain their strength since domestic and international support was cut off following the fighting in Marawi. But the military and the national police remain on high alert.

Malaysian police launched an investigation Saturday in conjunction with overseas security agencies after media reports said two nationals had been detained by the Taliban. Both detainees were alleged to be involved with ISIS.

Malaysian authorities are on guard for the risk that nationals who travel to Afghanistan return home to conduct terror attacks.

Some members of the Association of Southeast Asian Nations had hoped the U.S. withdrawal from Afghanistan would leave the superpower free to play a greater role in their region. A resurgence of extremist groups would represent a negative consequence of this realignment.

"Extremist ideas and capabilities were exported from there all over our region, and they pose a security threat to Singapore, too," Lee said.

The evacuation of Afghans is fueling concerns in Southeast Asia over the spread of extremism. Afghans have become the largest contingent of refugees taken in by Indonesia, according to the English-language Jakarta Post newspaper. There are reportedly 7,490 Afghan refugees residing in the country.