SYDNEY -- Matt Quinn was once a youth leader with a passion for tackling injustice -- an unlikely candidate, perhaps, to form a white supremacist gang.

But the Australian says he was also bullied as a teenager. "I just kept getting beaten up," recalled Quinn, now 40. "Having this group was like protection for me, nobody would touch me."

His change of heart did not happen overnight, but the moment an Asian man rescued him from being assaulted marked a turning point. Today, Quinn heads Exit Australia, a non-profit that seeks to deradicalize extremists. He is someone Australians are turning to -- not running away from -- as the country searches for answers to far-right ideology.

Yet, two years after a 28-year-old Australian man carried out New Zealand's deadliest mass shooting -- the murder of 51 people at two mosques in Christchurch on March 15, 2019 -- some experts say authorities are still not doing enough to counter the homegrown danger. Some say Australia is still wrestling with its own values, ideas and history, making it reluctant to confront the threat directly.

Quinn knows how real the danger can be. For him, his grandfather's graphic stories of mistreatment as a Japanese prisoner during World War II and right-wing political rhetoric about Australia being "swamped" by Asian immigrants in the 1990s proved a combustible mix. His gang would prowl western Sydney, looking for Asians to harass.

Soon Quinn was recruiting more angry young men -- and falling deeper into the extremist rabbit hole himself. "It just got worse and worse until I got to the point where I was thinking about doing an attack," he said, "going into the city and shooting Asians."

He pulled himself back from the brink. But in his view, there are still few support services to help those at risk of becoming entangled in white supremacism, in contrast to the millions of dollars allocated by the federal government to combat Islamist terrorism.

"They don't have support for their [underlying] issue, whether it is about looking after their family or dealing with trauma, they are always being pushed away," he said. "As soon as you give some of these people support, they drop the hate." 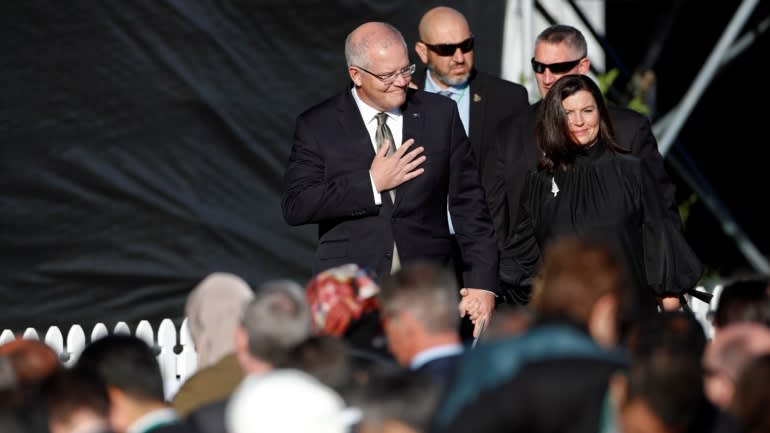 Quinn's analysis could explain, in part, why far-right groups are now present in regional towns and metropolitan cities around Australia. ASIO, Australia's spy agency, warns young people who are "barely in their teens" are being radicalized by these groups.

The agency says far-right extremism now constitutes around a third of its counterterrorism workload, up from only 10% to 15% in 2016.

Australia's national intelligence and security committee, made up of federal parliamentarians across party lines, is conducting an inquiry on how to address the problem. Meanwhile, the federal government led by Prime Minister Scott Morrison is preparing to designate a far-right group a terrorist organization -- a first in Australia's history -- but faces opposition accusations that it is "playing down" the domestic threat.

This is by no means a uniquely Australian issue, but recent incidents have heightened concern. In January, dozens of neo-Nazis rallied in a national park where they burned crosses and chanted slogans. In the town of Albury-Wodonga the following month, Australian members of the Proud Boys threatened people they believed were members of Antifa at their homes and workplaces. An Aboriginal woman was also blowtorched by a neo-Nazi in broad daylight.

COVID-19 has only perpetuated discrimination against Australia's minority communities. In a survey released this month, nearly one in five Chinese Australians reported being physically threatened or attacked because of their identity, while ASIO says far-right groups have exploited anxiety from the pandemic to recruit members. 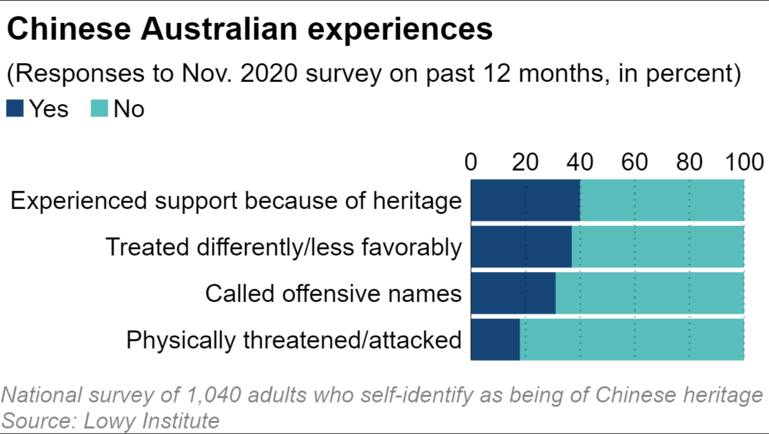 Jewish organizations are also sounding the alarm. "It's not just white nationalist or white supremacist ideas, it's actually neo-Nazi ideology that is becoming much more widespread and actively supported, aiming at the rehabilitation of Hitler and denial of the Holocaust, while advocating another genocide of the Jewish people," said Julie Nathan, research director at the Executive Council of Australian Jewry.

A recent report by the ECAJ found a marked increase in serious anti-Semitic incidents in Australia, including a doubling of physical assaults. Anti-Semitism is also creeping into mainstream institutions, the council claims, as more Jewish students reported incidents of bullying across Melbourne schools.

"The failure of schools to take this seriously is evidence of the acceptability of anti-Semitic ideas and abuse," Nathan said. "It has taken an outcry by the Jewish community for this situation to now begin to be addressed."

The difficulty of tackling racism and extremism in Australian society has roots in the country's history, according to Chin Tan, race commissioner at the Australian Human Rights Commission.

While Australia is now one of the world's most multicultural countries, it was built on openly racist policies. The government of first Prime Minister Edmund Barton in 1901 laid the groundwork for what came to be known as the "White Australia" policy -- a series of bipartisan legislative measures to maintain racial and cultural homogeneity. This was on top of devastating assimilation policies targeting the Indigenous population.

It was only in 1973 when the last remnants of the White Australia policy were completely eradicated.

The country would subsequently undergo a demographic transformation, accepting waves of immigrants from Asia and the Middle East. By 2023, the former colonial outpost of the British Empire is forecast to be home to more Chinese-born people than English-born. "Australia has taken a fair bit of quantum leaps in terms of social movement," Tan said. "We have people here today that lived in that white policy era. [They] still perhaps live under those values that we had in the past."

Tan believes it is incumbent on Australia "to reflect more clearly on what a multicultural society means for us in the context of where we were before as a country," stressing far-right ideology is "destructive to our social cohesion."

And while the White Australia policy is in the dustbin, the legal system is still far too accommodating to racists, according to Tan and the ECAJ's Nathan. In Victoria, Australia's second-largest state, racial vilification laws have only led to one successful prosecution in 20 years. A state parliamentary committee has called for the legislation to be expanded and for Nazi symbols to be banned.

Another issue, according to federal parliamentarian and counterterrorism expert Anne Aly, is that security agencies are struggling to adjust to threats from individuals rather than organizations.

Two years on from Christchurch, where the lone Australian gunman carefully planned and executed his attack on Muslim worshippers, Aly said the authorities still "look at terrorism through the lens of Al-Qaida or of having a base." Manal Dokhan, whose husband was killed in the Christchurch mosque attack, gives her victim impact statement during the shooter's sentencing in August 2020.   © Reuters

The security committee member said the reality is that terrorism is not so hierarchical, and the country still lacks a "prescription" for the far-right despite having the largest suite of terrorism-related laws in the Western world.

Indeed, Australia has enacted more anti-terrorism legislation then the U.S., U.K. and Canada since the Sept. 11, 2001, attacks. The scope of these laws is so broad that the federal government has the power to strip Australian dual nationals of their citizenship if they are convicted of a terrorism offense. One expert calculated that from 9/11 to the end of 2007, a new anti-terrorism law was enacted almost every second month.

Complicating the fight is social media, which enables extremists to operate and recruit transnationally. Exit Australia's Quinn, whose organization works with Facebook to identify and remove their material, is especially concerned about foreign interference from groups based in the U.S., Europe and Brazil.

"The biggest threat we have is foreign groups who are linked to terrorism trying to get involved in the Australian space," he said. "They are basically looking for people who are angry, who are looking for darker and darker extremist material."

Many groups, he added, "are only interested in chaos."

Aly hopes the security committee's inquiry, due next month, will "uncover the extent of the far-right threat and prompt some response." She, like Tan, believes Australia is in need of some introspection.

"It is incredibly difficult to turn the mirror on yourself and examine your own responsibility in that space," Aly said, "but it needs to be done."