Thai PM embraces social media ahead of election, including criticism 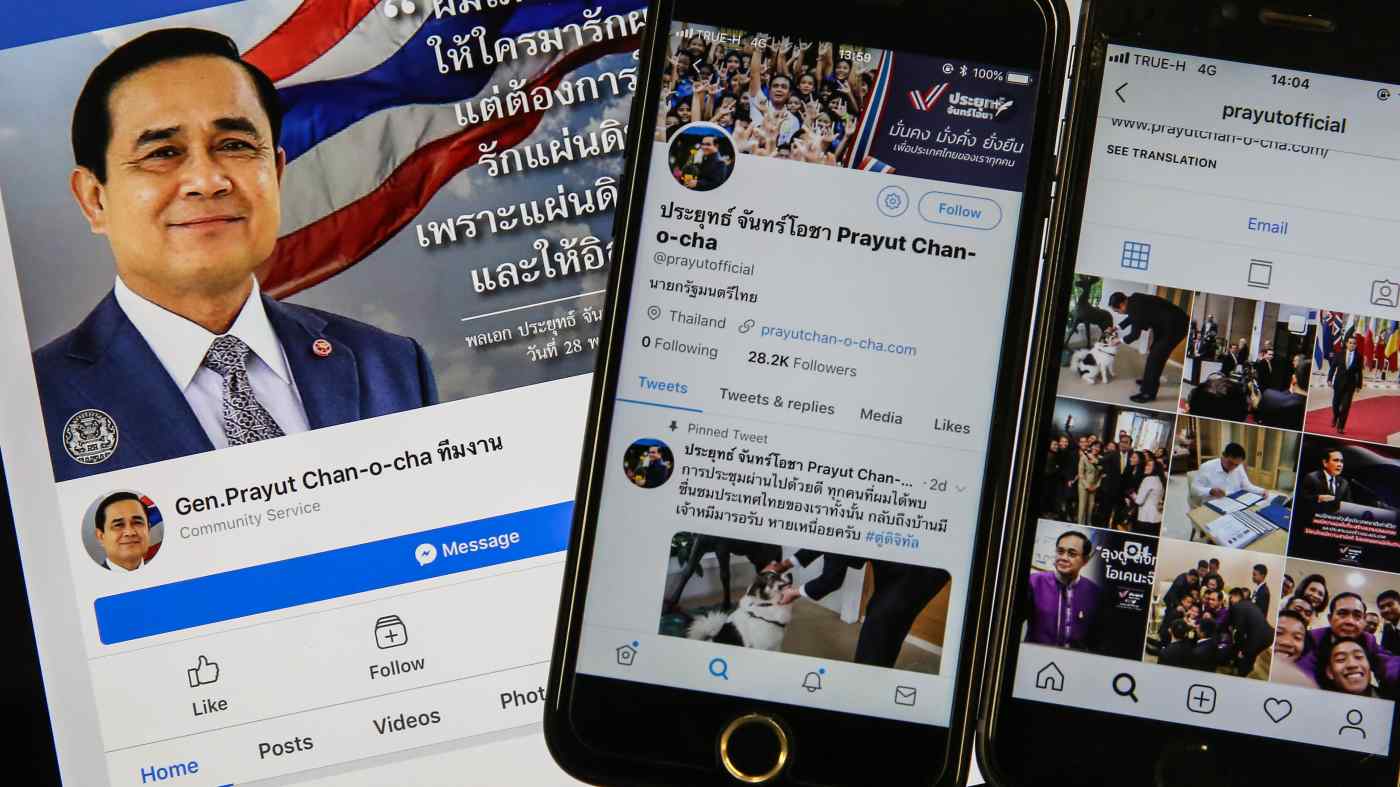 BANGKOK -- Thailand's Prime Minister Prayuth Chan-ocha is exploring the social networking universe in what is seen as a move to get a head start in the popularity stakes before a long-awaited general election that is supposed to take place next year.

"Today I feel glad and honored to have the opportunity to welcome the prime minister of Malaysia and his wife -- a leader of our neighbor with such long established and close ties," the prime minister posted on his new Facebook page, a photo of himself, Mahathir and their spouses. "We have discussed about our co-operations in many areas which will support the development of our country, to continue to grow alongside each other and drive forward the growth of our region in a sustainable way."

His other recent Facebook posts come in a wide range, from a photo from an official visit to Belgium to a video promoting an environmental cleanup campaign in Thailand.

Since its official debut on Oct. 14, Prayuth's Facebook page had gained more than 408,000 followers as of Thursday evening. Although the number is far below the more than 2.6 million followers of former prime minister Thaksin Shinawatra, or the more than 2.2 million of former prime minister and Democrat Party leader Abhisit Vejjajiva, it is quickly catching up. He also created accounts on Twitter and Instagram.

"The page will publicize his work and more relaxed sides and lifestyle that people may not have seen before," said Puttipong Punnakanta, deputy secretary-general to the prime minister. He also touched on potential for the premier to livestream through Facebook, without mentioning when that might happen.

The Prayuth-led military junta has said it will hold a general election next year, after ruling the nation for more than four years, but it is not clear when the poll might be. The junta has passed a bill to hold an election and has received royal approbation. The bill is expected to come into effect in early December and an election must be held within 150 days of that date.

For now, many political activities in Thailand are still banned by the junta. However, Prayuth seems to have made an exception for himself, with clear moves to present a more approachable face to the public.

"I am not a serviceman. I am an ex-serviceman politician," he said in January.

His activity since then has clearly shown his interest in holding onto his current position after an election. He has been busy traveling around provincial areas of Thailand, appealing to local people on his administration's good record. He has taken exercise in a public park and met with Japanese pop group AKB48. Starting official social networking accounts is the most recent part of his campaign to raise his popular appeal.

However, what has come as a surprise to some political observers is that Prayuth is allowing comments that are critical of him and his government to be written on his timeline. It might be part of a strategy to be seen to be more tolerant ahead of the election, as the junta has previously jailed activists who were critical of the regime. Prayuth in 2015 said he would execute journalists who did not tell the "truth."

In one example, Facebook commenter Mongkol Sangpakdee asked 15 questions of the prime minister. They included, "Why is your railway more expensive than [former prime minister and Thaksin's younger sister] Yingluck's?" and "Why has the government been helping Thai Airways despite its constant loss-making year after year?"

Another commenter, Thanakrit Promsiri, wrote, "Why are you saying bad things about him here? You all know it will be deleted anyway".

So far that has not happened, with Mongkol's post still up six days after it was written.

Deputy secretary-general Puttipong said the accounts were directly overseen by the leader.