Junta turns up the heat as young voters, Western diplomats back fresh face 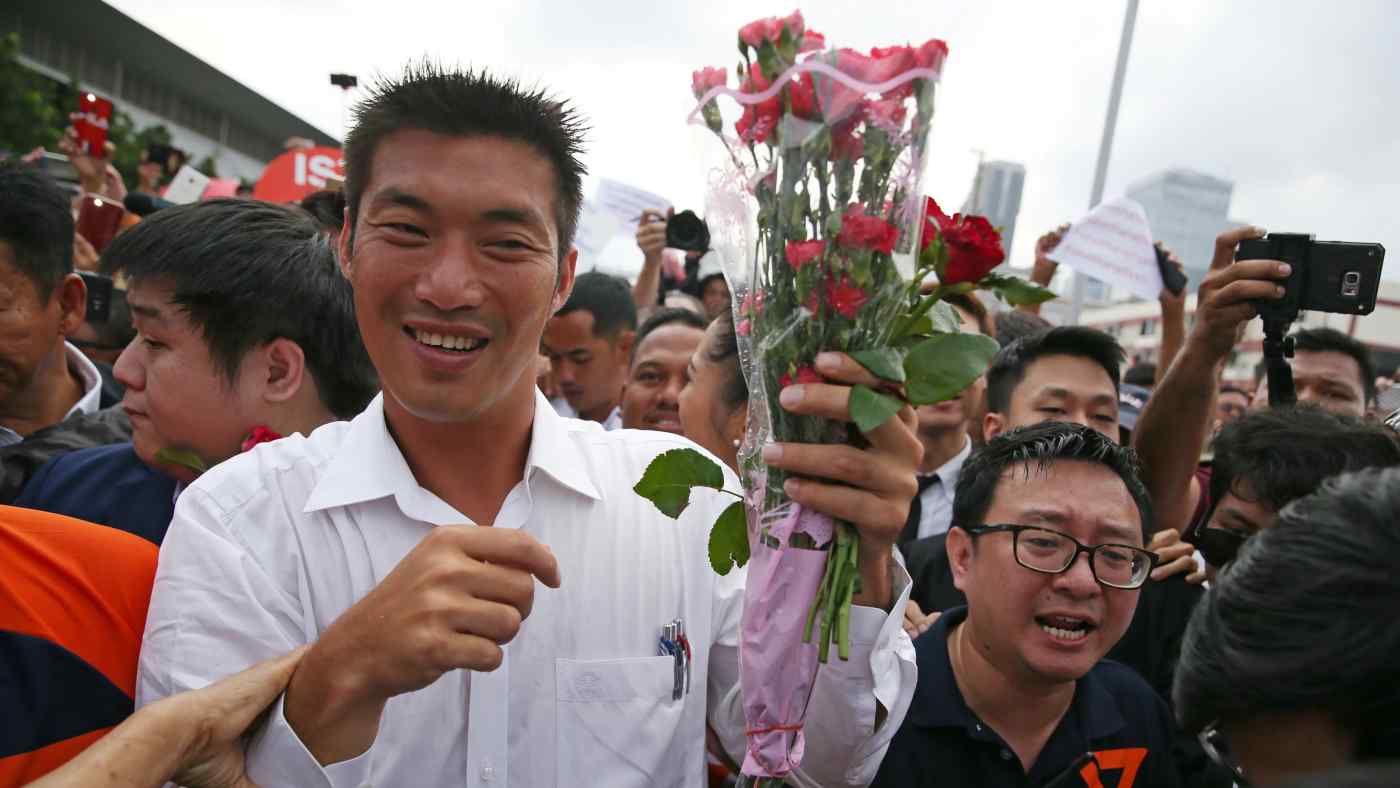 Thanathorn Juangroongruangkit, head of the Future Forward Party, greets supporters on Apr. 6 at a Bangkok police station, where he heard a sedition complaint filed against him by the army.   © Reuters
MARWAAN MACAN-MARKAR, Asia regional correspondentApril 10, 2019 17:09 JST | Thailand
CopyCopied

BANGKOK -- A billionaire who led his new party to unexpected wins in last month's general elections is rapidly becoming the symbol of the Thai pro-democracy movement, despite the ruling junta's efforts to curb the charismatic young firebrand.

Thanathorn Juangroongruankit, the 40-year-old leader of the progressive Future Forward Party, is facing mounting legal troubles and has been threatened verbally before and after the March 24 elections, the first in five years of military rule.

But rather than crumble or flee abroad in the face of what a leading Thai human rights activist describes as "dirty tricks," Thanathorn has stood his ground against the country's powerful army chief, ultra-royalists and officials from supposedly independent bodies.

Heir to an auto parts maker, Thanathorn continues to defy authorities, boosting the stature of his party, which won 81 parliamentary seats according to the initial vote count. The tally placed the FFP third in the poll, exceeding projections by even optimistic Thai insiders and watchful military officials, who had expected the untested party to garner about 30 seats.

According to diplomatic sources, Western embassies in Bangkok are closely monitoring the regime's treatment of Thanathorn and his party to gauge the sincerity of the junta's pledge of a return to democracy after the 2014 coup. This was clearly evident on Apr. 6 when Western diplomats showed up en masse to witness Thanathorn hear sedition charges read against him by the Bangkok police stemming from a 2015 complaint.

The diplomatic presence included officials from Australia, Belgium, Canada, Finland, France, Germany, the Netherlands, the U.K. and the U.S. Human rights representatives from the European Union and United Nations were also on hand.

The junta bristles at the political leverage that Thanathorn gains from being in the world spotlight. "This could not happen in their countries, but they did it in ours," Foreign Minister Don Pramudwinai told reporters on Tuesday. "We will ask them to cooperate and not do that again. It was against the diplomatic protocols of the United Nations."

But analysts say that even with the exposure, Thanathorn could still be convicted, putting Thailand in the same league as neighboring Myanmar during its own military rule. If this happens, Thanathorn faces jail and the dissolution of his party -- tactics that have been employed before by the conservative political establishment to suppress pro-democracy parties. 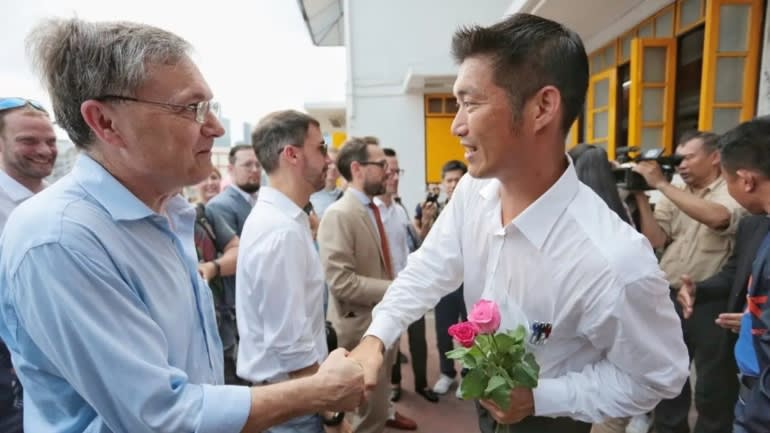 Thanathorn receives words of support from a Western diplomat on his way to the police station in Bangkok on April 6. (Photo courtesy of Future Forward Party)

Prior to Thanathorn's emergence as a political force, parties affiliated with Thaksin were at the forefront of the country's pro-democracy movement. But a knowledgeable source says that Thanathorn has "taken the torch from the Thaksin camp with this election."

Thaksin, now living in self-imposed exile after his elected government was ousted in a 2006 coup, senses the shift. "Thanathorn represents a generational change, and I like to see this younger generation coming up and working for the country," Thaksin told the Nikkei Asian Review during a telephone interview after the March elections. "We need new ideas and a new vision, and maybe an old man like me should step aside."

Puangthong Pawakapan, a political scientist at Bangkok's Chulalongkorn University, reckons that the rising star will be hard for the generals to suppress. "I believe it would not work even if the FFP is dissolved, or if Thanathorn [and his deputies] are threatened with imprisonment," she said. "They will continue to fight, and they will not flee the country. The establishment will make them martyrs among the youth and pro-democracy crowd."

Not surprisingly, the hawkish army chief, Gen. Apirat Kongsompong, has lashed out at this new development, which has been roiling since the coup and finally surfaced at the polls. "Social media is more powerful than the armed forces," he said in a warning about the changing political landscape.

His fears are not unfounded. Thanathorn's party drew over seven million young, first-time voters through savvy social media campaigns and public rallies, where bashing the country's top-heavy and unaccountable military was fair game.

Analysts say the FFP blindsided the junta and military, which squandered resources trying to contain the pro-Thaksin Pheu Thai party. The constitution and new election rules -- both drafted by the junta's allies -- were designed to limit Pheu Thai's parliamentary presence and engineer a favorable outcome for Palang Pracharath, the junta's proxy party.

"The regime and the military leaders were stunned by the success of FFP," a military intelligence source told Nikkei, referring to the shock on the morning after the elections. "They expected FFP to win some seats but not this many."

The source expressed the ruling establishment's dilemma: "There is panic because they did not plan for Thanathorn. And the military trying to use familiar tactics to control critics may not work; the situation can escalate."