BANGKOK -- Prayuth Chan-ocha, who has served as Thailand's prime minister since a military coup in 2014, is another step closer to being elected as the country's next leader after King Vajiralongkorn Bodindradebayavarangkun endorsed 250 members of the senate who were chosen by the junta.

The list of 250 names was released in the Royal Gazette, the government's public journal, on Tuesday. It includes 15 former junta ministers, who resigned a week ago, as well as 60 members from the National Legislative Assembly -- the only parliamentary body under the military government's rule.

Although the constitution states that senators must not align with or yield to the mandate of any political party, it is likely that they will act along pro-junta lines. Of the total, 194 members were hand-picked by the Senate Selection Committee chaired by Deputy Prime Minister Prawit Wongsuwon. Fifty members were selected by the junta from a list prepared by intellectuals and later narrowed down by the Election Commission. Six seats are filled by active members of the military and police.

Senators play a very important role in forming the government. The current constitution states that the prime minister should be chosen by a combined majority of the 250 upper house members and 500 lower house members.

On Monday, 11 single-seat parties declared their affiliation to pro-junta forces led by the Palang Pracharat Party, which already has 115 seats in the lower house. Assuming no last-minute surprises in the lower or upper houses, the pro-junta body looks to have secured the 376 seats in the parliament necessary to elect the next prime minister. Palang Pracharat's sole prime ministerial candidate is Prayuth. 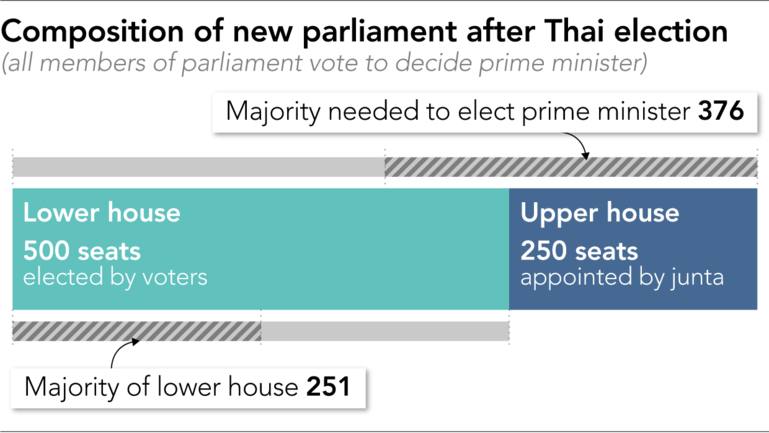 The Action Coalition for Thailand, with five seats, and Palang Thongtin Thai, with three seats, are also expected to join the pro-junta side.

Although the pro-junta grouping has secured enough seats to form the next government, it must also obtain a majority in the lower house in order to pass laws and budgets to govern the nation effectively. The anti-junta coalition consists of seven parties, including the Pheu Thai Party, which support ousted former Prime Minister Thaksin Shinawatra, and the Future Forward party led by young billionaire Thanathorn Juangroongruangkit. The bloc is set to have 245 members in the lower house, just six seats shy of a majority.

The pro-junta and anti-junta coalitions are both scrambling to gain more seats in the lower house to achieve a majority. The mid-sized Democrat Party, with 52 seats, and Bhumjaithai Party, with 51 seats, have not yet made it clear which side they will join.

The Democrats will hold a party convention to elect a new leader on Wednesday. Their former leader and former Prime Minister Abhisit Vejjajiva has resigned, taking responsibility for the party's poor election performance. There are four candidates for the position, none of whom have clearly confirmed which side they will choose if elected.

Bhumjaithai leader Anutin Charnvirakul said his party would clarify its stance on May 20. He said on Monday that his party's lower house members would not vote for a prime ministerial candidate who was relying on the Senate to secure the top job, but as the country's political tug-of-war continues, he might simply be buying time to thrash out deals.