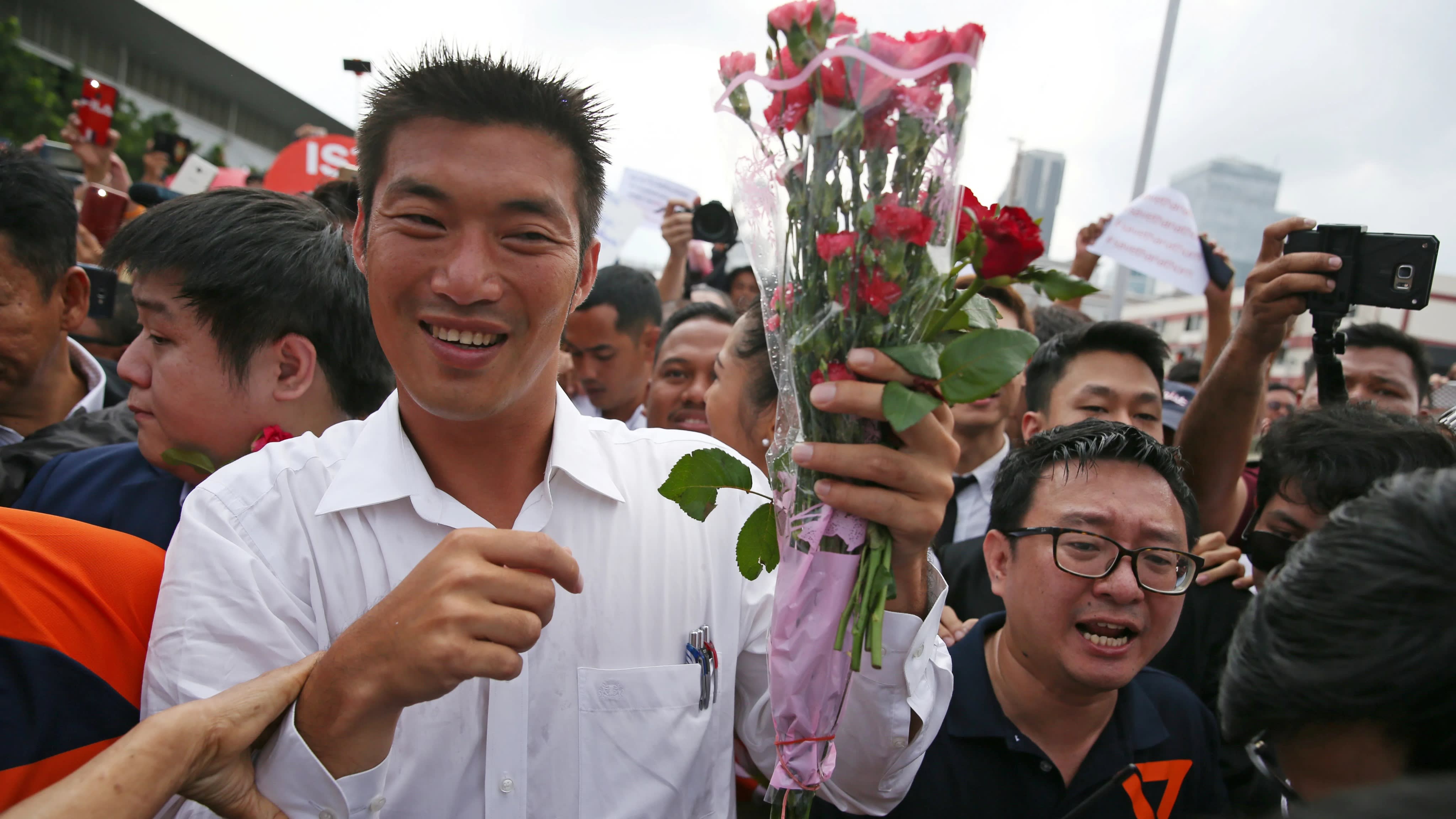 BANGKOK -- A prominent Thai anti-junta political figure faces the risk of losing his lower house seat, which he gained in the March election, in a legal case seen as boosting the prospects of the former military rulers.

A day before the first session of the National Assembly after five years of military rule, the Constitutional Court of Thailand announced on Thursday that it unanimously decided to accept a petition from the Election Commission to disqualify anti-junta Future Forward party leader Thanathorn Juangroongruangkit.

The 40-year-old billionaire is being tried for breaking the constitution and electoral laws prohibiting election candidates from owning shares in media companies. The election authority filed the case with the court after investigating counter-evidence submitted by Thanathorn. His party earlier had posted documents, which appeared to show the shares were transferred to his mother before he entered the election period.

Future Forward was formed by Thanathorn with a group of like-minded individuals in March 2018. The party made a notable election debut by winning 80 out of 500 seats in the lower house, becoming the third-largest group. One of its election pledges was to trim the country's defense budget, a promise that won support from millennials but also resulted in a strong backlash from the military.

Thanathorn -- whose family owns Thai Summit Group, an auto parts manufacturing company and where he served as vice president -- would lose his seat in the lower house if he is found guilty. He would also be banned from politics for 20 years and could also face a jail term of up to 10 years.

Thanathorn will be given a chance to defend himself within 15 days after he receives a bill from the court, but nine judges -- voting eight to one -- ruled to bar the leader from attending parliament until the court reaches its verdict. The first assembly is scheduled on Friday.

Don had been accused by the Election Commission in June 2018 after his wife was found holding shares in a media company. The case was taken to the Constitutional Court more than a year after it came to light, and he was found not guilty.

Pointing out that Thanathorn's case reached the court in less than 60 days, Piyabutr questioned whether the two politicians had been treated equally.

After Future Forward made a surprisingly strong showing in the election, several cases arose involving Thanathorn. He was accused by the military regime of assisting a group of democracy campaigners to flee a police station in June 2015. He was charged and ordered to report to a police station in April for sedition.

Security-related cases including sedition dating to 2015 are assigned to military courts even for civilians. When Thanathorn reported to the police last month, diplomats from 10 Western embassies and representatives of the U.N. High Commissioner on Human Rights looked on from outside of the police station. Foreign Minister Don accused the foreign envoys of intervening in Thailand's justice system.

Since the beginning of the year, the Constitutional Court has issued a few rulings that have benefitted the pro-junta political parties. It ordered the anti-junta Thai Raksa Chart Party to disband in March, just a few weeks before the election, as it judged that the party's move to nominate Princess Ubolratana as its sole candidate for prime minister was unconstitutional. The party has been linked to former Prime Minister Thaksin Shinawatra.

The court earlier this month ruled that an act regarding the calculation of the 150 party-list seat allocation was constitutional. The Election Commission determined to prioritize seat allocations to smaller parties, based on an interpretation of the act.