BANGKOK -- Thailand's first general election in eight years on March 24 is shaping up to be a battle of the generations.

In an election with 51.4 million eligible voters, the elderly hold sway with around 20% of the vote. This group of voters are keen to preserve stability and favor discipline that they believe the military government will able to continue to offer. This contrasts with those aged 18 to 25 who form around 10% of the electorate who want change and a move toward greater democracy and freedoms.

The Nikkei Asian Review hit the streets and spoke to voters of all ages to get a sense of which way the wind blows in an election that has so far proven to be highly unpredictable.

"It doesn't mean that I love the dictator, but I just want the country to stay peaceful and he is the one who came in and calmed down the situation five years ago," she said. The junta seized power in a coup in 2014.

Boonyoung Chitchaem, a 70-year-old street vendor in Chiang Mai, echoed the same sentiments, saying that peace is a priority for him. 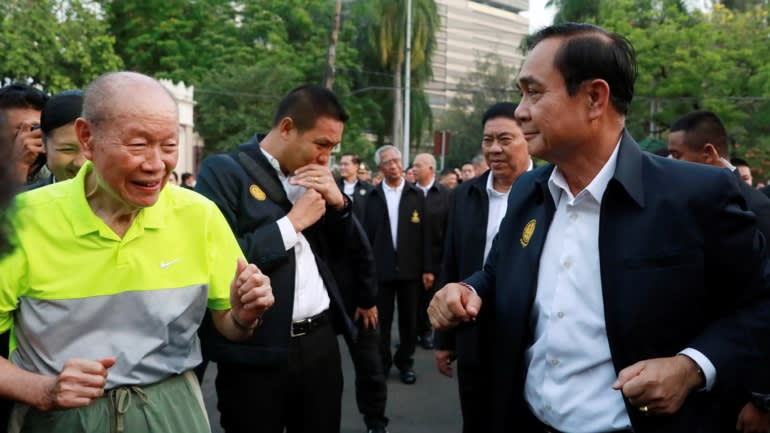 Prime Minister Prayuth Chan-ocha exercises with an elderly man in Bangkok on March 20. Some older voters said they wanted Prayuth to stay in power.   © Reuters

First-time voters in the 18 to 25 age group feel differently. In early February, a round-table discussion with political leaders was held at Siam Square One, a busy mall in central Bangkok that attracts throves of young people. The panelist who won the loudest applause was not a leader of a major political party.

It was Thanathorn Juangroongruangkit, leader of Future Forward party, which was formed less than a year ago.

The 40-year-old said: "The Prime Minister ordered district office directors to solve air pollution problems by themselves. They were told they would be punished, if they failed to do it. This is the way of military thinking!"

Thanathorn won over the young audience with his environmental message focused on chronic air pollution in Thailand. 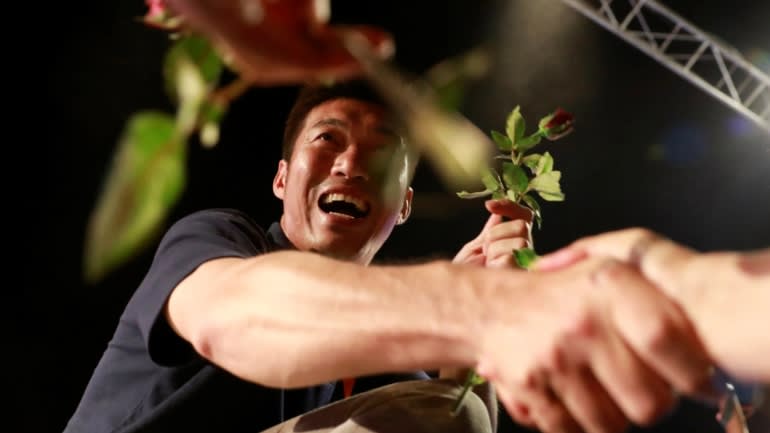 Some younger voters see Thanathorn Juangroongruangkit, leader of the Future Forward Party, as someone who can effect change toward greater democracy and freedoms.    © Reuters

Young voters see the billionaire-turned-politician as a rising star who can bring about a transition to full democracy. "I've made up my mind to vote for Future Forward, because I believe this party can change the structure of the country to solve the problem from the root cause," said a 25-year-old voter who only wanted to known as Pon.

He said his friends were also most likely to vote for Future Forward or Pheu Thai Party, a major force aligned with former prime minister Thaksin Shinawatra. The key strategy for Pon and his friends is to ensure that the junta does not return to power.

A bank teller who identified herself as Benyapa said: "I would vote for the Future Forward Party as I am bored with those old-fashioned politicians with old-fashioned thoughts."

A local television channel reported that in a survey of students at Chulalongkorn University in Bangkok, one of the country's best, over 70% endorsed Future Forward as their favorite party and over 50% wanted Thanathorn as the next prime minister. Casting her vote early in Bangkok. Thailand is due to have its first general elections in eight years on March 24.   © Reuters

While a divide has appeared between the elderly and first-time voters, the age group in the middle seems less polarized. Boonyakiat Karawekphan, a lecturer in politics at Ramkamhaeng University, suggested that this group could become the so-called kingmakers.

These voters, aged between 26 and 45, number around 14 million or roughly 37% of the electorate. According to Nida Poll, the majority said they had not yet decided which party they would vote for.

"Although I do not love the general [referring to Prayuth] I would have to vote for the pro-regime party as I don't want any change in major economic policies," said Sombat Lertwichai, a worker in a plastic factory in Samuth Prakarn province near Bangkok.

Nida's latest poll, 66% of 1,264 respondents said they would vote for any party that will help them to reduce debt and increase their incomes. 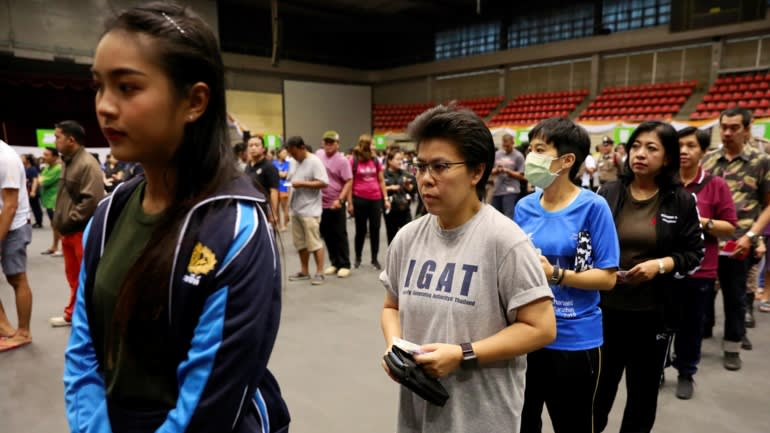 The young and old are polarized in their views about who to vote for but the middle group holds the greatest deciding power, forming nearly 37% of the electorate. Here, Thais cast their votes early in Bangkok.   © Reuters

Indeed, the major parties are dangling carrots to win over this group of pragmatic voters. Pheu Thai Party said it would implement policies to help poor farmers generate higher incomes by shifting toward growing value-added crops such as organic rice in the medium to long term, while supporting agricultural prices in the short term.

The Democrat Party also presented ideas to support the poor. They include price supports for certain agricultural products and a pledge to impose a minimum wage.

The pro-junta Palang Pracharat Party said it would expand the welfare program the junta implemented to help the poor so that an additional 2 to 3 million more people, from the current 14.5 million, can access help.