Thai junta clamps down on opposition after election BANGKOK -- The military government and Royal Thai Army have ramped up pressure on opposition leaders who have questioned the validity of an election that is likely to return the junta to power.

Thanathorn Juangroongruangkit, leader of the Future Forward Party, on Wednesday went to Facebook to tell his followers that he received a police summons to answer sedition allegations dating from 2015. The complaint against the 40-year-old billionaire-turned-politician was filed by the army. It alleges that the auto parts tycoon helped anti-junta protesters that year.

Last week, seven anti-junta parties, including Future Forward, formed a coalition that was seen to have clinched a majority in the lower house in the election, held on March 24.

It was the first time in eight years that Thais were allowed to vote for their leaders, and Thanathorn's party likely won 87 seats, making it the third largest political force in the country and the second largest in the anti-junta coalition.

Future Forward was one of the political parties that demanded the Election Commission of Thailand release full results as soon as possible as a hedge against any electoral fraud. The commission has indicated that it is unlikely to make a final official announcement before May 9.

If found guilty, the Future Forward leader could face up to nine years in prison. He must report to the Pathumwan police station in central Bangkok on Saturday. 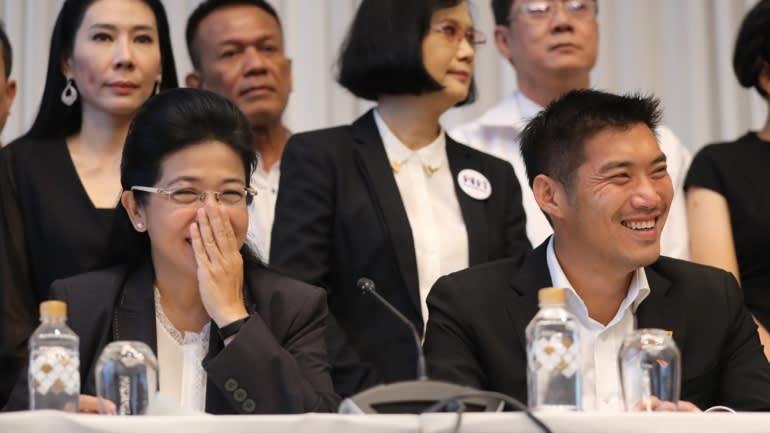 Future Forward Party leader Thanathorn Juangroongruangkit, right, revealed that he was summoned by the police on Wednesday. (Photo by Kosaku Mimura)

Future Forward Secretary-General Piyabutr Saengkanokkul also received a summons, dated March 27, to appear as a witness. He was ordered to report to the same station by 1 p.m. on Wednesday but appointed a lawyer to represent himself and to ask for a postponement, saying he was physically unable to attend.

Local rights watchdog group iLaw has said the moves are politically motivated. "According to our records, it cannot be denied that those charged with these cases took a clear stance against the NCPO," it wrote on its Facebook page.

The organization also published an article describing how the current regime has used sedition charges since 2015 to intimidate opponents and justify their detention. It has even tried to maneuver political opponents into a military court whose judgments have been questioned by rights advocates, the article says.

Thanathorn's revelation about the summons came after army chief Apirat Kongsompong publicly criticized the anti-junta coalition. "Those who graduated from abroad shouldn't bring extreme leftist ideology to topple the Thai democratic regime with the monarchy as head of state," Apirat said at a news conference on Tuesday.

The comment was perceived as an attack on Piyabutr, who earned a law degree in France and once gave a lecture about the monarchy's role in the justice system. The lecture was criticized by Thai conservatives as a threat to the monarchy.

One of Future Forward's main electoral pledges was to cut the number of military officials by half and to substantially reduce the defense budget.

Future Forward has not been alone in questioning the election results. On Sunday, about 30 supporters of ousted former Prime Minister Thaksin Shinawatra gathered at Rachaprasong intersection in central Bangkok to protest what they said was fraud at the polls. And students from nine universities on March 28 launched a petition drive to impeach members of the election commission for mishandling the voting process.

Prime Minister Prayuth Chan-ocha waded into the controversy on Monday. "There are still some with bad intentions, who have been trying to twist facts in many aspects by using social media," he said in a statement. "Certain groups are trying to plant wrong ideas in the public with the aim of causing chaos and damage to the institutions of the nation, religion and monarchy ... Parents should take good care of their children. Teachers should educate their students thoroughly. Civil servants should take care of their subordinates."

Cabinet members and government authorities say the election was handled in a peaceful and orderly manner. But the commission is seeking to choose the interpretation of the rules to the benefit of small parties.

Commission Secretary-General Jarungvith Phumma said on Tuesday that the agency would decide later this week whether to use the formula that determines the distribution of party-list seats in a way that would reward small parties -- a decision that should have been made long before the election. Party-list candidates will fill 150 of the lower house's 500 seats.

Based on a formula, drawn up based on one interpretation of act in 2018, the pro-Thaksin Pheu Thai Party likely gained 137 party-list and single-constituency seats combined to finish as the election's clear winner. The pro-junta Palang Pracharat finished No. 2 with a likely 118 seats. No. 3 Future Forward's unofficial count is at 87. 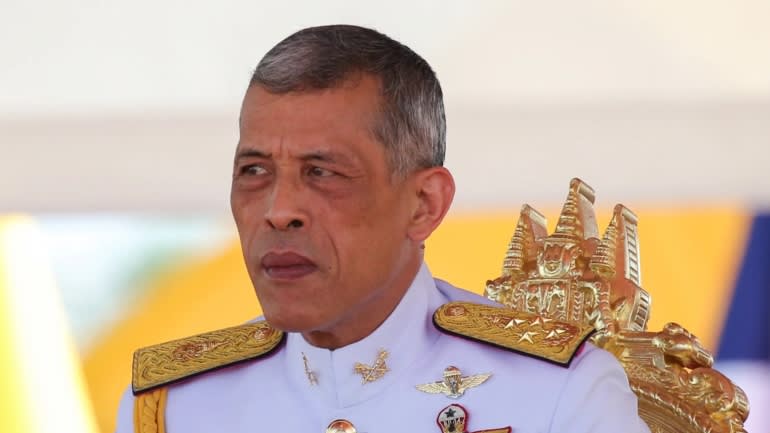 Thailand's King Vajiralongkorn Bodindradebayavarangkun in central Bangkok on May 14, 2018.   © Reuters

According to academics and some media outlets that have seen another formula, Palang Pracharat could lose two seats and Future Forward seven. Pheu Thai's total would likely stay the same due to its single-constituency showing.

Meanwhile, a seasoned analyst and observer of Thai politics says two recent royal announcements may have given the junta and army the confidence to move against their political opponents.

On the eve of the election, King Vajiralongkorn Bodindradebayavarangkun asked Thais to pick "good people" for public office, words later echoed by Prayuth and Apirat.

On Saturday, the king stripped Thaksin of his royal decorations, citing Thaksin's decision in 2008 to skip out of the country ahead of a two-year prison term. The fugitive has been pulling Thailand's political strings from abroad ever since.

"Now that the king has clearly taken the military's side," the political analyst said, asking for anonymity due to the sensitive subject he was discussing, "Prayuth and Apirat are using the same tone [as the King] to suppress people who are against them."

The country has one of the toughest lese-majeste laws in the world. Anyone who "defames, insults or threatens the king, the queen, the heir-apparent or the regent" can be jailed for 15 years.