Post-election uncertainty offers chance for technocrat to be caretaker leader BANGKOK -- Thailand's messy political transition towards democracy is paving the way for Ampon Kittiampon, a technocrat and a loyalist to the country's new monarch, to emerge as a potential contender for the job of prime minister.

Thai political insiders have gone from whispering his name to openly mentioning that Ampon's political fortunes are on the rise. The Thai-language press has amplified this chatter in columns written by the cognoscenti.

Ampon has worked with seven prime ministers in different roles and is good choice to head a "unity government" if there is a deadlock in parliament and there are protests, noted the largest daily Thai Rath early this week.

Bangkok-based diplomats are taking note of Ampon's emerging prospects. "His name has been circulating for some months and he becomes an option if there is political gridlock and the next parliament is unable to choose a prime minister from existing nominees," said one Western diplomat.

The likelihood of such gridlock has arisen after the country's Elections Commission made some controversial rulings following the uncertain results in the March 24 general elections. The commission's rulings have raised questions about the legitimacy of the polls, observers say, with some describing the process as "one of the most manipulated elections in Thai history."

On Wednesday, the Electoral Commission released the final results of the polls, which did not result in an absolute majority for any party. But that was not all: In an arbitrary calculation carried out since the elections, the commission has awarded parliamentary seats to small parties with insignificant votes to enable Palang Pracharat, the pro-junta party, to form a 20-party coalition.

This calculation has effectively shaved off the slight edge that a seven-party pro-democracy coalition had enjoyed since the results began to come in from polling day. Led by the Pheu Thai Party, which won 136 seats and retained its record as Thailand's largest political party, the pro-democracy camp ended up with 245 seats. Pheu Thai is the latest representation of political parties formed by former Prime Minister Thaksin Shinawatra. 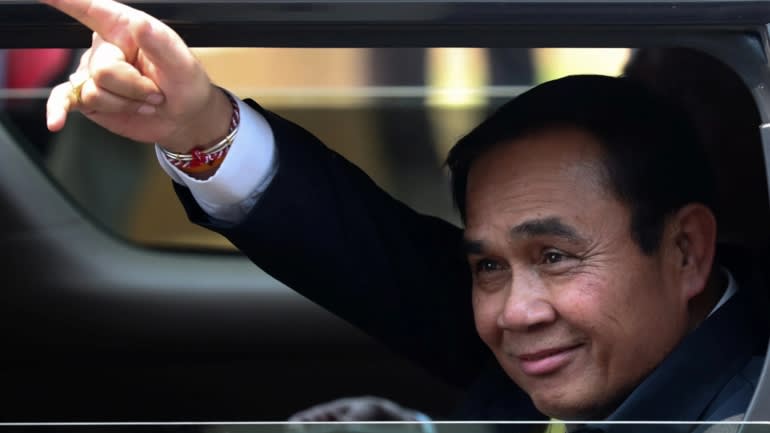 With the political confusion since the election, some observers now feel that Thailand's Prime Minister Prayuth Chan-ocha may not keep his job.   © Reuters

But even the pro-junta Palang Pracharath alliance, which has bagged 255 seats in the 500-member house, a slender majority, faces uncertainty in the prime ministerial stakes. The party wants its front-runner, incumbent Prime Minister Prayuth Chan-ocha, to keep the top job.

However, in order to head the next government, junta leader Prayuth needs 376 votes from a combined sitting of the 500-member lower house and the 250-member Senate. All Senate members are handpicked by the junta.

"But those numbers are still not guaranteed," said a leading member of a political party, who is following the behind-the-scenes horse trading that is under way. "Larger parties [from whom] Palang Pracharat expected support are still undecided and even full backing from the Senate is not guaranteed -- over 100 senators may vote independently."

New political rules, which were drafted by the junta's allies and enshrined in the 2017 constitution, have added to the climate of uncertainty. While the lower house is expected to open its inaugural session on May 22, there is no deadline to elect the new prime minister. Some analysts say the process could drag on for months. The junta's charter also permits parliamentarians to vote as they please and not according to a party line.

"Prayuth may also undermine his weak coalition because he is more used to being a dictator and not juggling the responsibilities that come with coalition-building politics," said Paul Chambers, an expert on Thai national security at Naresuan University in northern Thailand.

"He has a record of demanding top positions for his allies and other parties that Palang Pracharath wants in the coalition may not be happy if they do not get their slice of the cake."

Prayuth also has to contend with a potential challenge from Anutin Charnvirakul, a construction magnate and leader of Bhumjaithai, a medium-sized party, for the premier's post. Anutin's party has been aligned with the pro-junta coalition, although he has posted on Facebook that his party is still undecided about which coalition it will back. 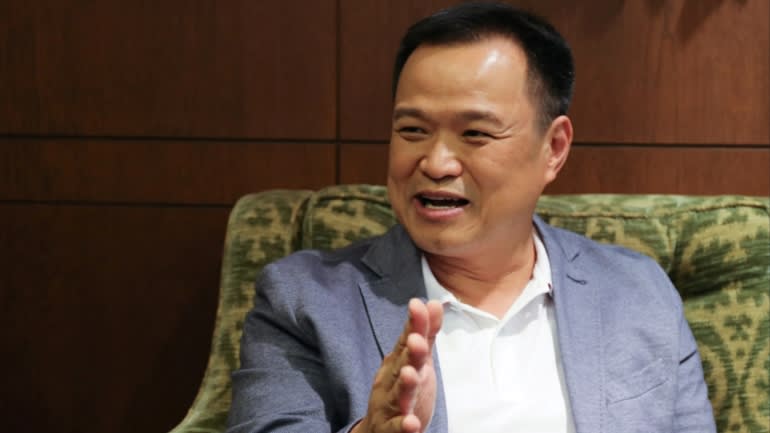 Anutin Charnvirakul, a construction magnate and leader of the Bhumjaithai party, who has also been mooted as a potential prime ministerial candidate.   © Reuters

These looming troubles have sparked speculation about a potential caretaker government being formed to break a likely parliamentary gridlock until the next elections. The Thai monarch has also appealed for peace and national unity following his coronation last weekend.

Sources within Thailand's conservative establishment view the monarch's call for unity as furthering the case for Ampon to head a caretaker government as a way to prevent the country from falling into months-long political uncertainty and acrimony.

Until now, Ampon has sat on the sidelines of political power. He served as the cabinet secretary for three successive governments, was the secretary-general of the National Economic Social and Development Board, a government think tank, and had stints as chairman of the board of directors at Thai Airways and the Bank of Thailand, the central bank.

Late last year, the Thai- and U.S.-educated economist was handpicked by the monarch to serve on the Privy Council, a body of royal advisers. Then early this year, the king appointed him to serve on the executive board of the Crown Property Bureau, which manages the vast wealth and assets owned by the palace, which is now under the direct authority of the monarch.

Well-connected Thais were hardly surprised by Ampon's elevation within palace circles. "Ampon has been a loyalist of the new king even when he was the crown prince," said one source from a family of royalists. "His Majesty trusts his record as a technocrat."