Prime minister campaigns for himself but evasive on election date Police were called out in Bangkok on May 22 to confront demonstrators calling for elections.   © Reuters
MARWAAN MACAN-MARKAR, Asia regional correspondentMay 30, 2018 14:15 JST | Thailand
CopyCopied

BANGKOK -- The Thai military government's tally of political adversaries who have been charged with sedition, a crime for acts of rebellion carrying a seven-year jail term, is approaching a chilling milestone.

Nearly 100 people face sedition charges, according to iLaw, a local human rights advocacy group. These include unarmed protesters and critics asserting their right to assemble enshrined in the constitution drafted by the junta's own nominees and approved by national referendum in 2016.

The latest victims include three leading members of Pheu Thai, the country's largest political party, which was pushed aside in 2014. The trio were charged for hosting a press conference on the eve of the fourth anniversary of the May 22 coup -- Thailand's 12th successful putsch since the end of absolute monarchy in 1932.

Another 15 pro-democracy activists were charged for staging a street protest on the actual anniversary to demand a general election.

The use of sedition laws to deter dissent has drawn unfavorable comparisons with the lenient treatment afforded protesters against an elected government in 2014, whose efforts to stage a general election they obstructed. Demonstrators against the government of Prime Minister Yingluck Shinawatra carried on for months with no concern about being charged for sedition, even when they threatened open rebellion at rallies in the capital. 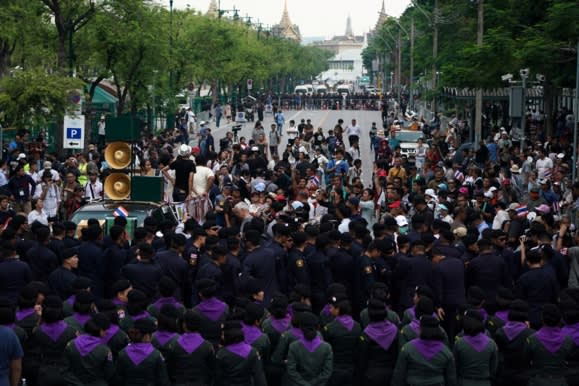 The fourth anniversary on May 22 of Thailand's most recent coup saw significant political tension in Bangkok and arrests.   © Reuters

Thai governments have not resorted to so many sedition charges in the recent past, and human rights advocates view their emergence as a sign that the generals are digging in as they enter their fifth year in power. This is Thailand's fourth and longest-serving military government since a student rebellion ousted an unpopular junta in 1973. The first government of Prime Minister Thaksin Shinawatra, which entered office in 2001, was the only elected Thai government ever to run a full four-year term, and also the first not only to win reelection but with an expanded majority.

"Sedition is being more widely used as a way to suppress political activists," Anon Chawalawan, head of the freedom of expression documentation center at iLaw, told the Nikkei Asian Review. "Sedition sounds scary to the general public, and makes life difficult for the victims -- the amount for bail is very high."

The tough tactics come at a time when Prime Minister Prayuth Chan-ocha, the coup leader and former army chief, is trying to build his personal political capital ahead of a general election already postponed four times. Prayuth's most recent election promise was for February 2019, but he remains coy about exact dates.

The next poll will be held "according to my schedule" Prayuth said recently in a pique revealing of his authoritarian tendencies. His tone feeds the climate of uncertainty that has spread across the country. Restrictions remain in place for the country's old parties as well as new ones allowed to register since March. They are unable to hold meetings or reach out to their bases, however, because a junta prohibition against gatherings of more than five people can still be invoked.

Prayuth personally is marching to quite a different tune. He has been testing the possibility of staying on as premier with trips around the country and speeches to large political rallies. He has courted political power brokers in the provinces, and promised billions of baht for public works. But he has yet to erode the support for Pheu Thai, the party that ran the government he overthrew.

According to its own internal surveys, Pheu Thai expects to win not less than 200 of the 500 seats in the lower house. Voter sentiment tested by state intelligence agencies puts that figure higher at 230, and such estimates would make it still the largest party in parliament.

Both predictions are discouraging for a regime that based its existence on containing Pheu Thai, or even burying it. This is the obstacle the regime and its allies among the country's reactionary establishment in the capital have failed to overcome, Prajak Kongkirati, a political scientist at Bangkok's Thammasat University, told Nikkei. "The junta knows that electoral politics are difficult to control, and the conservative elite are afraid of the people," he said. "We should expect election delays because the junta is worried about the intelligence reports, and does not know how to sway voters to get the results it wants."

Since the coup, some 60% of the seats in the appointed National Legislative Assembly have been occupied by military and security officers. Twelve of the 37 members of the cabinet are still from the armed forces or police, and three of the five deputy prime ministers are generals. Deputy Prime Minister Prawit Wongsuwan also holds the defense portfolio. Annual defense spending has risen from 192 billion baht in 2015 to 222 billion baht this year, according to local press reports.

Some analysts are concerned that the military government's tough line on dissent could cause a backlash. They fear Prayuth's use of authority will create friction if it goes too far. "Panic cannot be ruled out in retaining his grip on power," one veteran foreign observer told Nikkei.

Prayuth clearly showed signs of unease this week after the leader of Future Forward, a new political party, announced at a party gathering over the weekend that if elected the party plans to change the new constitution through legal means. The prime minister warned party leader Thanathorn Juangroongruangkit, a political neophyte, that his party "should think twice about whatever they do."