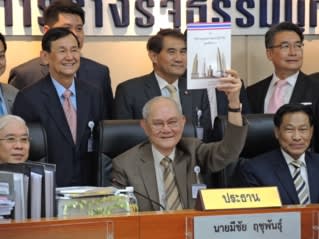 Meechai Ruchupan, head of Thailand's Constitution Drafting Committee, brandishes a draft of the kingdom's 20th constitution since 1932 in Bangkok on March 29.

The relevant clause is effective for five years from the next general election, which will not be before July 2017.