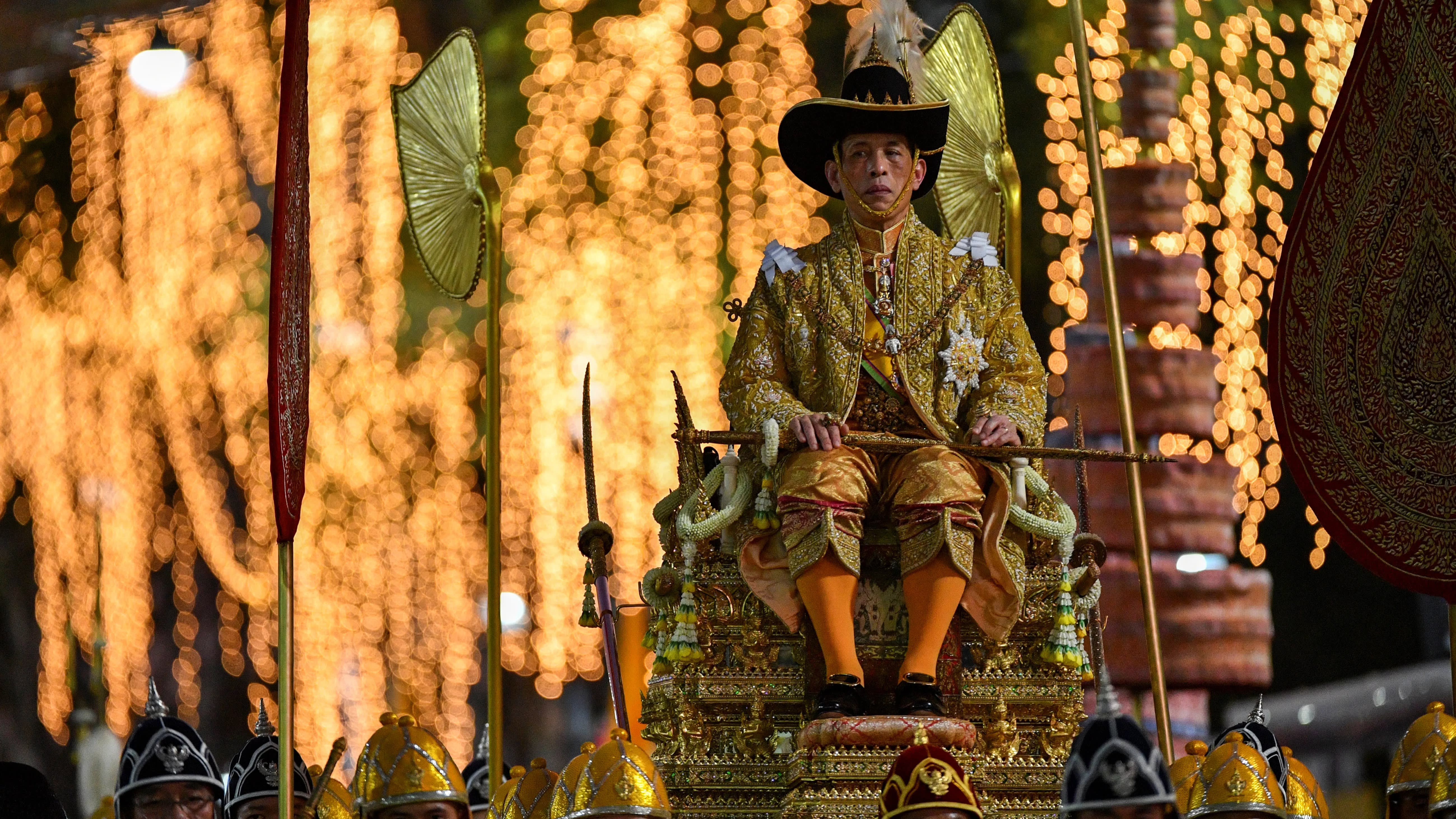 Thai King Maha Vajiralongkorn is carried on a chair after taking part in a royal barge procession on Dec. 12.   © Reuters

BANGKOK -- Thailand's King Maha Vajiralongkorn capped off his coronation rituals with a royal boat procession on Thursday, as he moves to bolster his personal authority over the military and the country as a whole.

About 2,300 naval personnel rowed 52 traditionally and elaborately decorated barges down Bangkok's Chao Phraya River. The parade was last held in 2012 to celebrate the 85th birthday of the current king's father, King Bhumibol Adulyadej.

King Vajiralongkorn ascended to the throne after his father's death in 2016. The father often intervened at times of political turmoil throughout his 70-year reign, and many believe that the stability brought by Thailand's constitutional monarchy proved instrumental to the country's rise as one of Southeast Asia's industrial leaders.

Since taking up his father's mantle, King Vajiralongkorn has been taking more power into his hands. Though the monarch nominally serves as the head of the Royal Thai Armed Forces, King Vajiralongkorn issued a decree in October placing two military units stationed in Bangkok under his direct command. He also took control of the team in charge of protecting the royal family in 2017.

But the king faces resistance. The parliamentary opposition Future Forward Party opposed the October decree, a rare move in a country where the king has unquestioned authority. The decree ultimately passed thanks to the pro-military ruling coalition.

Future Forward won 80 of the 500 lower house seats in the March general election. Yet on Wednesday, Thailand's Election Committee decided to file a court petition to disband the party, claiming it received illegal donations from its leader. Some suspect the military-friendly committee is doing a favor to the ruling coalition, which holds a narrow majority.

King Vajiralongkorn's unconventional approach extends to the royal household as well. He married for the fourth time to Queen Suthida in May. The king then named former nurse Sineenat Wongvajirapakdi as his royal noble consort in July, reviving the title for the first time in about a century.

Sineenat was stripped of all royal titles just months later in October, accused of being unsatisfied with her position and of pressuring the queen. Several royal household officials close to her were also fired several days later.

Thailand is struggling to escape the middle-income trap, which occurs when countries suffer a slowdown in growth before joining the ranks of advanced economies. The U.S.-China trade war has squeezed Thailand's exports, while rising wages push companies to consider relocating to cheaper neighbors like Vietnam. Promoting advanced industry will be crucial to Thailand's continued growth.

"Stability in the political regime, with the king at its core, will be key," one expert said.