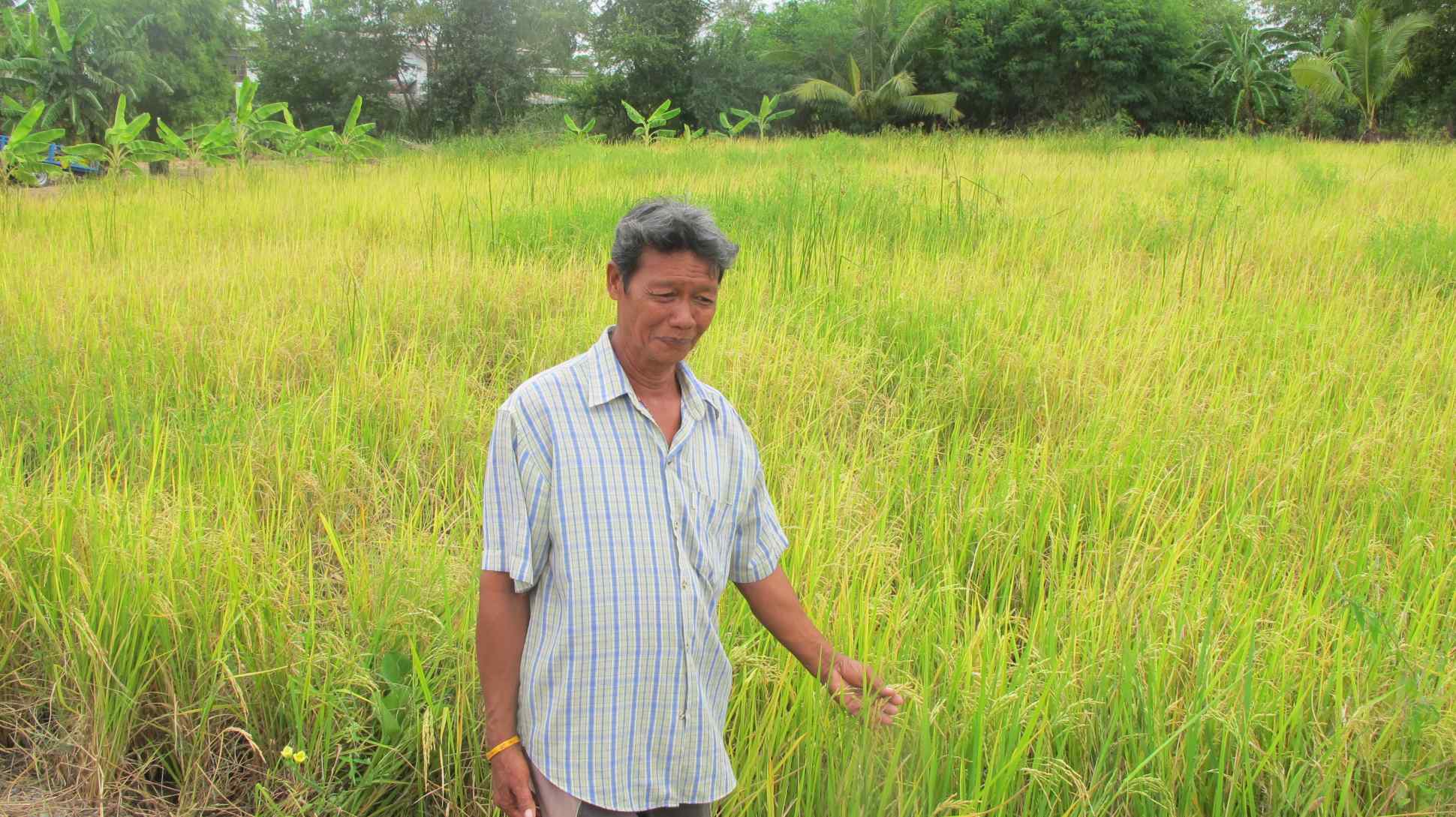 BANGKOK -- Rice is a political commodity in Thailand, where 40% of the work force (about 14.6 million people) is employed in agriculture -- a high percentage for an upper middle-income country. About 60% work in rice production, so grabbing the rice farmers' vote is a good way to win elections.

That message was not lost on the Pheu Thai Party, whose de facto leader Thaksin Shinawatra masterminded a generous subsidy campaign that promised to buy "every grain of rice" from farmers at fixed prices in Thailand's 2011 general election. Pheu Thai won, but the policy cost the country and the Shinawatra family dearly, despite making rice farmers wealthier for two years.

Thaksin's youngest sister Yingluck Shinawatra, who became prime minister after the Pheu Thai victory, has been on trial for two years for alleged dereliction of duty in failing to prevent corruption and abuses in the so-called "paddy-pledging" scheme run by her government, which came to an abrupt end after a military coup on May 22, 2014.

The final hearing of defense witnesses was held on July 21, and the Supreme Court's criminal division for holders of political positions is scheduled to rule on Aug. 25. Hundreds of Yingluck sympathizers showed up at the July 21 session, and the United Front for Democracy against Dictatorship, better known as the Red Shirt movement -- supporters of Pheu Thai -- has predicted that a larger crowd will gather for the verdict.

A government panel has already ordered Yingluck to pay 35.7 billion baht (about $1 billion) in compensation for the scheme's losses, and announced on July 24 that it had frozen her bank accounts, prior to the Supreme Court ruling. Yingluck is set to make her final statement in the case on August 1.

If found guilty Yingluck could face up to 10 years in prison. With the cremation of the late King Bhumibol Adulyadej scheduled for Oct. 26, Prime Minister Prayuth Chan-ocha has warned of legal action against any disturbances prompted by the court case. A possible safety valve, allowed under Thailand's newly promulgated post-coup constitution, would permit Yingluck's legal team to appeal the ruling, which if granted bail, would avoid immediate imprisonment.

Thaksin, who was Thai prime minister between 2001 and 2006, was found guilty of abuse of power by the same court in 2008, but fled into exile before the ruling, which sentenced him to two years' imprisonment. Yingluck, in contrast, has vowed not to follow in her brother's footsteps. "I'm ready to meet my fate," she told the Bangkok Post on July 10.

Witnesses told the court that the rice subsidy scheme, which promised farmers fixed prices of 15,000 baht ($448) per ton of plain white rice and 20,000 baht per ton of fragrant jasmine rice, eventually cost the country about 500 billion baht in losses, including payments for stockpiling, higher than market payments, wastage and off-record sales.

The program ran out of funding in late 2013 and started to miss payments to farmers, adding fire to pro- and anti-government protests in the streets of Bangkok that preceded the coup. At the end of the scheme the government was paying farmers 40% above market prices, saddling the post-coup government with more than 18 million tons of unsold rice.

Three years later the export market is showing signs of returning to normal. About 14 million tons of stored rice was categorized as "edible," with the remaining 4 million tons destined for animal feed or ethanol production. The final government auction of the edible stockpile was completed successfully in May. 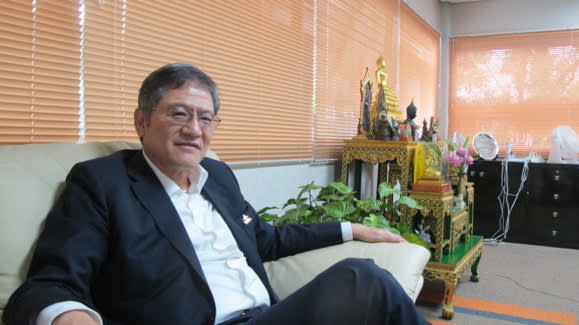 The rice market is "back to normal" after three years of oversupply, says Charoen Laothamatas, head of the Thai Rice Exporters Association. (Photo by Peter Janssen)

"When the news came out that the government had sold all the existing stock, suddenly the price surged," said Charoen Laothamatas, president of the Thai Rice Exporters Association. "In three weeks the price was up $80." Prices have since fallen back in response to a larger than expected second crop in Thailand this year because of abundant rains.

Before the scheme was implemented, Thailand was the world's biggest rice exporter for five decades, accounting for about 40% of the global export market. Exports fell to 6.9 million tons in 2012 and 2013, from 10.7 million in 2011, as the scheme drove up Thai rice prices, but recovered to 10.9 million tons in 2014, earning the country 174.8 billion baht. Exports remained close to 10 million tons in 2015 and 2016, and TREA is forecasting exports at about the same level this year. But prices have been low for three years.

Populist polices to subsidize rice prices for farmers are not new in Thailand. Before the Pheu Thai program a 2008-2011 government led by the Democrat Party ran an "income support" scheme subsiding rice and other commodity products. After the coup the military said it would not continue the paddy-pledging scheme, but it continued to subsidize farmers with cash payments when world prices tumbled. 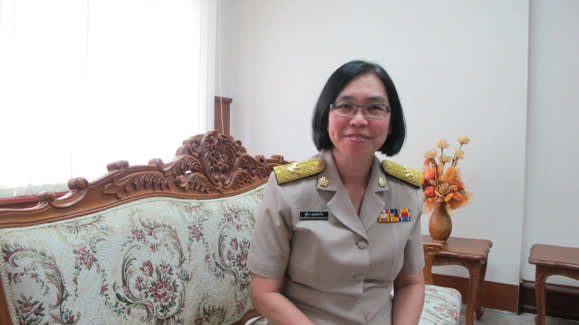 Chutima Bunyapraphasara, who was permanent secretary of the Commerce Ministry after the coup, was assigned the task of cleaning up the rice mess and devising a long-term strategy to reduce the need for subsidies. "I came up with the idea that if we want to cope with the market while reducing government intervention to the maximum we must rely on supply and demand," Chutima, who is now deputy minister of agriculture, told the Nikkei Asian Review.

Thailand arguably grows too much rice, producing about 33 million tons a year. One way of boosting farmers' incomes would be to reduce production, limiting supply and potentially bolstering profits. The Commerce Ministry has set a long-term goal of reducing production to 29 million tons a year, but it is unclear how the reduction will be achieved.

The government is trying to encourage farmers in some unirrigated areas to switch to other crops. And in 2016 the regime announced a new policy of promoting the formation of "big farms" -- collectives of small farms grouped together to reduce costs through joint payments for seeds, fertilizers, pesticides and tractor rentals. Loans are available from the state-run Bank of Agriculture and Cooperatives at interest rates of just 0.01% per year.

The long-term goal is to create farms on a scale similar to large holdings in the U.S. But the average size of Thailand's rice plots is just 19,200 sq. meters. "How can you get Thai people, who are so individualistic, to group together?" asked Chutima. "They don't like people telling them what to do, but they keep an eye on what the other farmers do, and whether their lives are improving."

The government's assumption is that more small farmers will join the scheme if big farms demonstrate that they can reduce production costs by the 20% target, while increasing yields and quality. If it succeeds, the program would increase the government's ability to direct farm production, helping it to manage nationwide production.

Skeptics abound. "It is impossible to control farmers," said Nipon Poapongsakorn, a rice expert at the Thailand Development Research Institute Foundation. "Not only farmers but millers and exporters -- we are a capitalist country, not a socialist country, and even the socialists gave up. But I agree with the direction of the change [toward big farms.]"

Instead of offering farmers incentives to join big farms, such as low interest rates on loans, which will eventually need to be curtailed, the government should be concentrating on longer-term market measures, said Nipon, who was one of the witnesses against Yingluck at her trial. "There are things the government can do but they are afraid to do. Would the government dare to charge farmers for water [for irrigation]? I don't think so, but if there is no charge the farmers will continue to grow rice because water is free." 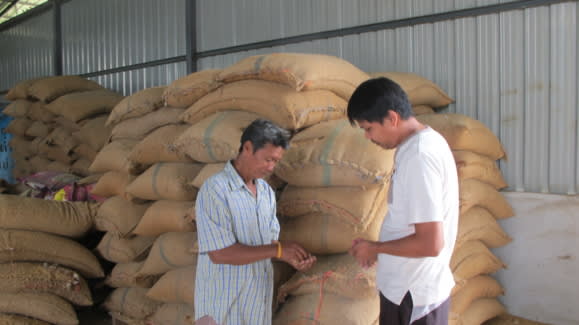 The big farm scheme has proved a hard sell among rice farmers in Ayuthaya province, near Bangkok -- a natural flood plain that has been a rice basket for hundreds of years. "In this area 95% of the farmers grow rice because the water is good, the soil is good," said Nopadol Sawangyati, 36, acting manager of a big farm that includes 87 small farmers and 3.52 sq. km of land in Chang Yai village in Bang Sai district.

Initially farmers refused to join the scheme because they wanted the government to offer them a fixed price, Nopadol said, but eventually more came on board as prices remained low and their profits disappeared. "There are many benefits to joining a big farm, like it's cheaper to buy fertilizer and seeds," said Chit Preelukachat, 64, a member of the Bang Sai farm collective. Nopadol is pioneering a deal with a nearby noodle factory to grow rice strains suitable for noodle production, which could fetch a higher price. That is the kind of innovative thinking the government is hoping for. "From the big farm policy we want to make the farmers think for themselves, to understand the market and to work together as a strong group," said Chutima.

Time may be on the government's side. Most rice farmers are more than 50 years old, and the younger generation is not drawn to the backbreaking work. "In another 10 years the rice farms will decrease and then rice prices will go up on their own," Nopadol said. "In the long term you won't need to encourage people to farm. They will do it on their own."