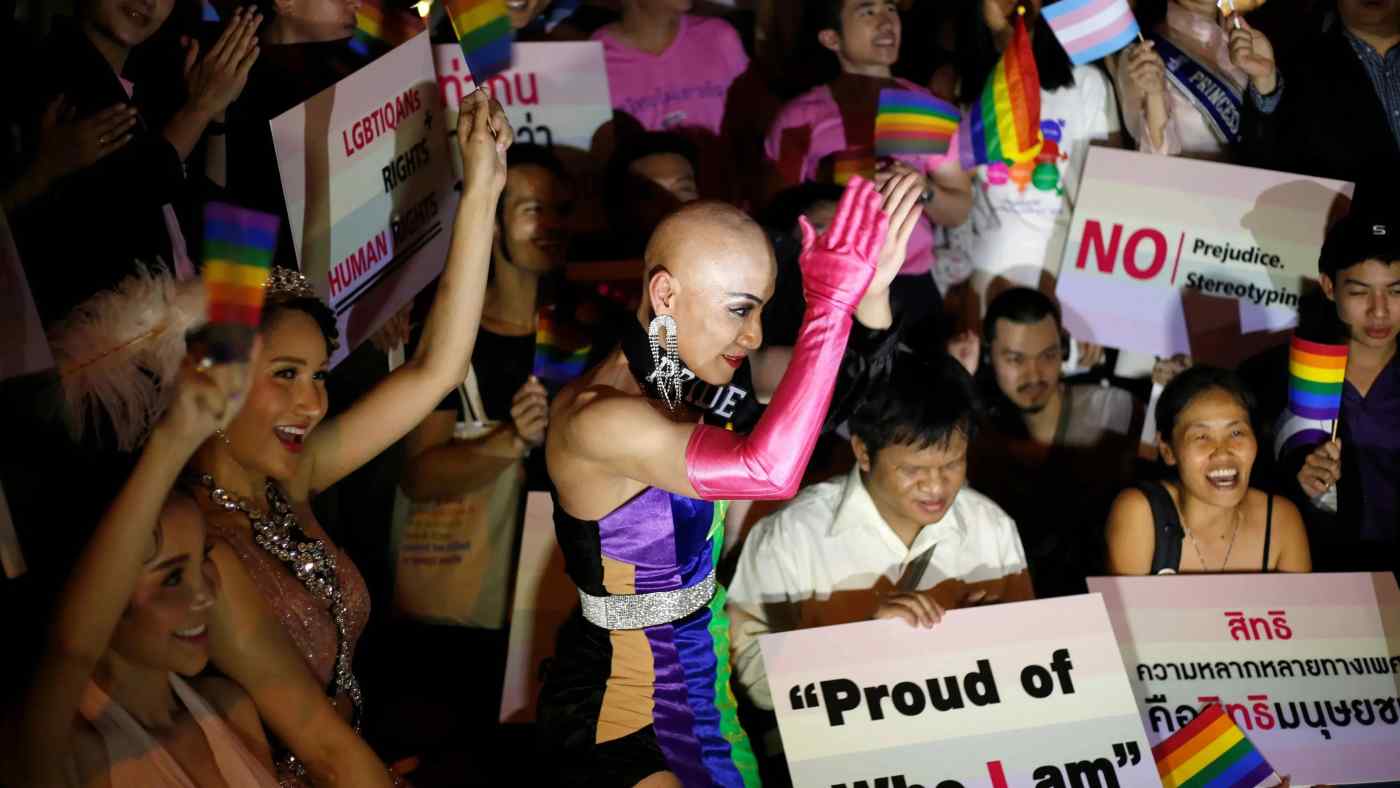 The Tourism Authority of Thailand launched a campaign targeting lesbian, gay, bisexual and transgender visitors in 2018 that has involved roadshows in Asia, Europe and the U.S.

Thailand hosts one of Asia's large communities of LGBT people, at an estimated 4.5 million in 2018, according to LGBT Capital.

But the country still has some way to go in terms of embracing the community.

In mid-December, the Bangkok Post reported that activist Ekkawat Pimsawan submitted a proposal to legalize same-sex marriage to the opposition Pheu Thai party in a bid to draw attention to the issue.

"We gain a partial acceptance from the society," Kittinun Daramadhaj, president of the Rainbow Sky Association of Thailand, an LGBT rights group, told the Nikkei Asian Review.

"In other words, we're allowed to have a certain place to convey our message, but actually we don't have rights to any legal protections," he said.

Kittinun has for years been at the forefront of fighting for LGBT legal rights in Thailand. He has pushed a civil partnerships bill, but it has yet to receive parliamentary approval. Lawmakers attribute the delay to the bureaucratic legislative process.

However, a report by United Nations Development Program and the U.S. Agency for International Development in 2014 concluded that lawmakers tend to be conservative and that existing laws are viewed as inviolable. This makes policy development and legal reform more difficult.

"At the end, there is no law to protect our rights at all," said Kittinun -- "that's why we need to keep fighting for legal protection."

The LGBT community's demand for same-sex marriage rights has led to calls for other legal reforms.

For example, transgender people cannot change the gender registered on their identification cards. Most trans women run into problems because they look like women but the gender on their ID cards remains male, making many feel harassed when they go through security checks at immigration.

According to the UNDP-USAID report, LGBT people in Thailand have to contend with societal pressure regarding what is considered good citizenship and respect for family. Sexuality should not go against accepted norms or bring personal or family shame, it said.

"It is good to have gay friends, so we are allowed to be somebodies in society," Kittipat Chalaragse, a well-known 38-year-old cross-dresser and TV host, told Nikkei.

"But it is definitely not OK when a family finds out it has a gay member," Kittipat said.

The abiding issue is that Thai society has still not really come to terms with the existence of LBGT groups yet. "When they wholeheartedly accept us, it will encourage them to legalize something to protect us -- one day."