A quarter of a century ago on May 20, 1992, the late King Bhumibol Adulyadej finally stepped in to put an end to weeks of political turmoil in the capital Bangkok. Peaceful demonstrations and hunger strikes had turned violent on a hot Sunday evening three nights before, when opposition leader Chamlong Srimuang, a retired general and former Bangkok governor, was responsible for moving a crowd of anti-government protestors towards the administrative heart of the capital and the royal family's main residence. Chamlong had rallied upwards of 200,000 people to protest against his old foe, the former army chief General Suchinda Kraprayoon, who had taken over as prime minister without bothering to get himself elected -- going back on a promise not to do so. Chamlong was arrested the next afternoon during a military crackdown, as the capital fell prey to some of the worst political violence in modern Thai history. The belated royal intervention remains a defining moment in the last reign, but many on the streets at the time feared it would never come. 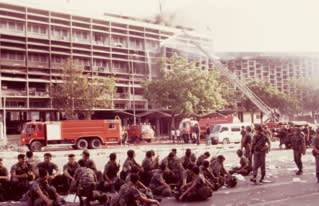 Troops rested on Rachadamnoen Avenue on Tuesday morning as the fire brigade hosed down smoldering government buildings including the public relations department where valuable historical documents had been burned overnight. (Photo by Dominic Faulder)

BANGKOK -- Just after 5:30 a.m. on Tuesday May 19, 1992, soldiers waving automatic rifles were clearing protesters against Suchinda Kraprayoon's government from Bangkok's Royal Hotel. The place had become a tourist's nightmare: 400% occupancy and a compulsory dawn checkout.