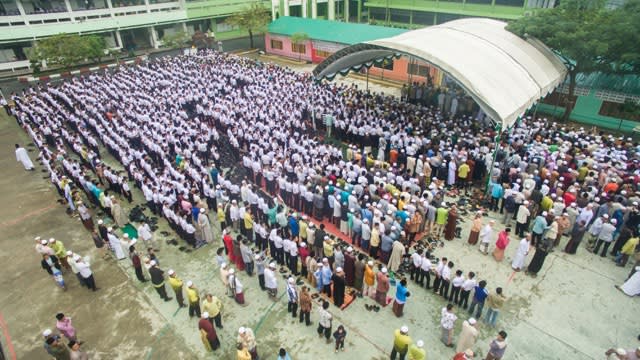 YALA, Thailand -- Muslims in Thailand's southernmost provinces are bidding farewell to a prominent spiritual leader accused by Thai police of leading a separatist movement intent on carving out a homeland for ethnic Malays in the region.

Wartani News, a local media outlet, quoted family members of Sapae-ing Basor as saying he had passed away on Jan. 10 while living in exile in Malaysia. He died of a lung infection after being treated for diabetes and heart disease. He was 81.

About 2,500 people congregated on Monday morning at Thamvithya Mulnithi, a high school in southern Yala province where Sapae-ing served as principal until he fled the country in December 2004. Sapae-ing had been charged with treason by police over his alleged involvement in a series of attacks on police and military facilities in the region. Sapae-ing Basor, spiritual leader of Thailand's southern separatist movement and once one of Thailand's "most wanted" men. (Courtesy of Basor family)

A significant number of students who joined the separatist cause and became armed militants graduated from the high school, making Sapae-ing an easy target for the government. About 6,000 students study at the school, and hundreds have taken up arms against the Thai government in recent years. Nevertheless Sapae-ing, who was educated at a university in Saudi Arabia, commanded respect from Thai authorities as well as admiration from local Muslim communities.

"He was the most selfless person we ever knew," said one cadre from the Barisan Revolusi Nasional, a key southern rebel group that surfaced in the early 1960s. "He always placed the needs and dignity of his community before him."

Armed insurgency in Thailand's Muslim-majority south erupted in the early 1960s, about 50 years after Thailand, then known as Siam, and Britain drew the Thai-Malaysian border.

The BRN and other rebel groups went underground in the early 1990s after training and financial support from Middle Eastern countries dried up, amid a blanket amnesty program launched by the Thai government that offered small plots of land to former combatants. 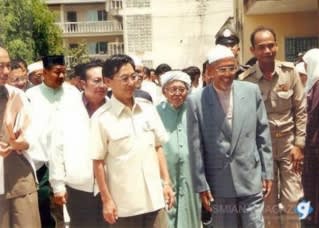 Sapae-ing Basor escorts Thailand's then-Prime Minister Chuan Leekpai during a visit to the Thamvithya Mulnithi School in southern Thailand in the early 1990s; behind them is Haji Haron Sulong, Sapae-ing's father-in-law and school rector. (Courtesy of Basor family)

The groups revived their separatist campaign in late 2001, and began launching attacks against the government's military and police outposts and remote camps. Today, the BRN controls the vast majority of the rebel combatants. Thai security and separatist sources said about 90% of armed combatants on the ground answer to the BRN.

In January 2004, a group of BRN commandos raided an army battalion and stole about 350 military weapons, after killing four soldiers on duty. Since then, insurgency-related violence has been frequent and is responsible for about 7,000 deaths.

Since its inception, the BRN has looked to post-colonial Indonesia for inspiration, while relying on a network of traditional Islamic schools in the southern Thai region as its support base.

Malay Muslims, and the armed combatants in particular, see Sapae-ing as epitomizing a narrative that sets them apart from the rest of Thailand, which is predominantly Buddhist. They view him as a man with integrity and strong religious credentials who placed the interest of his community over his own interests.

A teacher from Thamvithya Mulnithi school recalled Sapae-ing checking bars and pubs after school hours to see if any of his students were drinking. Although technically not illegal, drinking and intoxication is strongly frowned on in this conservative Muslim community, where most marriages continue to be arranged by elders.

Thai police have maintained that Sapae-ing is the overall leader of the BRN, and at one time they placed a 10 million baht reward on his head. The reward system for the region was dropped by the military government that assumed power after a 2006 coup that ousted Prime Minister Thaksin Shinawatra.

The mystique around the late spiritual leader has not faded. Thai Prime Minister Prayuth Chan-ocha, who led the 2014 coup that toppled the government of Prime Minister Yingluck Shinawatra, Thaksin's sister, issued a statement on Sunday expressing condolences to Sapae-ing's family. He instructed the authorities to help the family transport his body back to Thailand's southern region from Malaysia's Terengganu state.

Even so, a senior BRN source said the movement would continue its fight against the Thai government, noting that Sapae-ing's death would not affect the group's military operations. Thai security officials and BRN militants told the Nikkei Asian Review that his death would not have any significant impact on stalled peace talks between the government and Mara Patani, an umbrella organization of southern rebel groups.

"He was a spiritual leader to us and to everybody," said the source, who declined to elaborate on the relationship between Sapae-ing and the BRN ruling council.

Sapae-ing's students described him as a very strict and disciplined person, but also extremely kind and well-mannered.

Artef Sohko, a youth activist who graduated from Thamvithya Mulnithi in 2004, told the Nikkei Asian Review that he could not see any leader who possessed the kind of moral authority and commanded as much respect as Sapae-ing.

Artef, the first ethnic Malay to be elected as the secretary-general of the Student Federation of Thailand in 2008, said that the Malay-speaking region will need such a man should there come a time when the national government and the people of the region are prepared to make concessions and negotiate their coexistence.

"There was nothing beneath him," Artef said. "We would go around and pick up trash around school ground, and it set examples for the students. But people would also snap to attention whenever he was around. They didn't fear him. It's that deep respect they have for him."