BANGKOK -- Thailand's Constitution Drafting Committee appears to have found a way to unify the long-divided nation -- with the final draft of what could be the country's next constitution.

The draft is being roundly criticized as undemocratic. 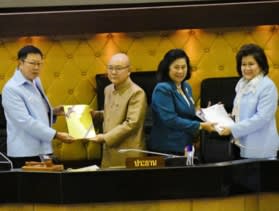 Senior members of the Constitution Drafting Committee, far left and far right, submit the final draft to members of the National Reform Council on Aug. 22. (Photo by Hiroshi Kotani)

The committee on Aug. 22 submitted its work to the National Reform Council, an independent body that has been in charge of enacting political and social reforms since the military staged a coup in May 2014.

The council will vote Sept. 6 on whether to approve the draft and its 285 articles. If the council approves it, the draft will be put to a referendum in January. If it then wins a majority of the vote, Thailand's new constitution will take effect.

The draft introduces a scheme that would allow an "independent" organization to supersede the government so that public order can be restored more quickly should the political situation become too unstable.

This organization, however, would pave the way for the military to intervene in political decisions to break deadlocks.

Article 259 calls for a National Committee on Reform and Reconciliation Strategy to be established. The stated aim of the committee is to carry out reforms, curb hostilities among the people and realize reconciliation.

The most controversial clause is Article 280. It would grant emergency powers that could last as long as five years. According to the provision, the reconciliation committee shall be authorized to take all necessary actions to remedy a situation on behalf of the cabinet, if two-thirds or more of the committee members agree to it. All decisions and actions taken by the committee would be deemed legal.

This powerful committee would have no more than 23 members, including the supreme commander of the armed forces, the heads of the army, navy, air force and police, one former prime minister and one former lower house chairman.

Elected leaders would have only three seats on the committee -- the prime minister as well as the lower and upper house chairs.

The January referendum remains a tall hurdle to the draft in its current form. And the international community is likely to protest the draft's anti-democratic clauses.

Thais already seem to be unifying against it. Consider Thaksin Shinawatra and his followers. Thaksin is a former prime minister who was removed by coup in 2006. Two years later, rather than face corruption charges, he fled the country. The longtime fugitive remains a divisive figure in Thai politics to this day.

On Aug. 16, when news of the draft spread, Thaksin, in Finland, called it "the worst" and told his followers that it is simply unacceptable.

Thaksin's opponents, many of whom filled the streets of Bangkok and created the political instability that led to the 2014 coup, are also scornful of the draft.

An official of the People's Democratic Reform Committee, told a Thai newspaper that the draft appears to accept de facto coups and allows them to be carried out without force.

Farmers, who make up a large portion of Thaksin's base, account for 40% of Thailand's population. If they and anti-Thaksin voters reject the charter, the process of drafting a constitution will go back to square one.