BANGKOK -- It is becoming less clear when Thailand's military rulers will step aside, as some supporters call for the junta to stay in power for two more years. 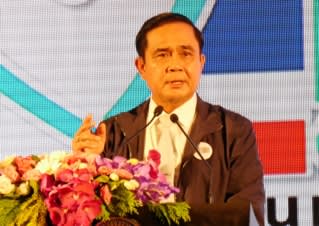 Some figures in the conservative camp, which is at odds with supporters of former Prime Minister Thaksin Shinawatra, are plotting to delay the as yet unscheduled general election. They aim to get the junta to keep governing longer.

Proponents of continued military rule say reform should come before any election. Little is said about what sorts of reform are needed, though.

These conservatives seek to prevent pro-Thaksin forces from regaining power.

An anti-Thaksin political activist, the Buddhist monk Luang Pu Buddha Isara, was on June 9 surrounded by reporters in the lobby of the Parliament House in Bangkok. He was at the building to hand a letter calling for an extension of the military rule, backed by 50,000 signatures, to Paiboon Nititawan of the National Reform Council.

Buddha Isara said that if needed, he could collect 5 million signatures asking for the military junta to stay in power to realize reform before a general election.

But it was Paiboon, a former senator, who triggered the political campaign for allowing the government of Prime Minister Prayuth Chan-ocha, who led last year's coup, to continue governing.

At a June 4 government meeting, Paiboon requested Prayuth to stay on as leader for about two more years. "If everyone wants to me to stay on, I will do so to work for them and the country, but they must protect me against accusations, both at home and abroad," local media quoted him as saying.

Prayuth's remarks caused a stir. They were seen as a sign that the military is seeking to maintain its grip on power by postponing the general election. A vote was expected to be held in 2016 following the establishment of a new constitution.

The general's response to Paiboon's call enraged the pro-Thaksin camp.

The United Front for Democracy Against Dictatorship, the pro-Thaksin group whose supporters are known as Red Shirts, lambasted Prayuth's comment. Thai people will not be pleased if the prime minister breaks his promise, the group said.

Chaturon Chaisaeng, who was education minister in the ousted government of Yingluck Shinawatra, Thaksin's younger sister, warned that delaying a return to democracy would stir both domestic and international discontent.

Thailand's politics have been mired in turmoil for nearly 10 years amid bitter conflict between pro- and anti-Thaksin camps. The current military government was initially supposed to promote reconciliation between the two sides as a neutral mediator and bring the nation back to democracy swiftly.

Proponents of an extension of the military rule say the new government to be elected in the poll could avoid making serious reform efforts. The military government should be allowed to complete reforms, they argue.

They desire to reinstall the interim government of Prime Minister Anand Panyarachun. Anand's government came to power after a year of military rule brought about by a bloodless military coup in 1991.

Anand carried out a series of reforms in his tenure, which lasted less than a year. He introduced a value-added tax and revamped state-run companies, for example. The reforms proved popular and earned Anand, who is viewed as corruption-free, broad public confidence.

Some Thais hope Prayuth can duplicate Anand's success. Unlike Prayuth, who led the military coup, however, Anand was a diplomat before he became leader.

It is questionable whether time is what the current military government needs. It has no significant achievements to show in its efforts toward national reconciliation and economic recovery during the year or so since the coup. In such circumstances, it is difficult to see how the junta will solve the challenges facing the nation even if it stays in power for two more years.

What is certain is that the military junta will face harsher international criticism if it prolongs its rule.

After his remarks provoked an outcry from media and scholars, Prayuth backpedaled, saying his tenure will end around September next year at the latest.

Some ordinary Thais are also supporting the idea of a prolonged military rule because of public security concerns. Widespread discontent about existing political parties is giving the conservatives a pretext for promoting a revival of rule by the elite.