Thailand to declare state of emergency due to virus outbreak

BANGKOK -- Thailand is to declare a state of emergency in an effort to combat the spread of the new coronavirus.

Prime Minister Prayuth Chan-ocha said the emergency decree would be enacted on Thursday, without giving details. Measures to contain the outbreak would be adjusted daily in accordance with the changing situation, he said.

As of Tuesday, Thailand has reported 827 cases of COVID-19, with four fatalities. The number of confirmed cases has more than quadrupled in a week.

The Ministry of Public Health revealed on Tuesday that the disease had spread to 47 out of the country's 77 provinces. Bangkok's Lumphini boxing stadium, run by the Royal Thai Army, has emerged as an epicenter of Thailand's domestic epidemic in recent days. Boxing fans from provinces across the kingdom caught the virus at the venue on March 6, taking it back to their hometowns.

The Thai government and the Bangkok Metropolitan Administration have tried to counter the spread with the closure of commercial and leisure venues in Bangkok, as well as educational institutions nationwide. The government has also asked sports stadiums, movie theaters and convention centers to close.

Bangkok went further by closing 26 types of businesses, including shopping malls, spas, hair salons and golf courses, starting on March 22, as part of efforts to contain the spread by reducing contact among the population.

The closures have resulted in a major exodus from the capital. In fear of losing their income sources due to the closures, migrant workers from other parts of Thailand and neighboring countries like Myanmar and Laos started fleeing from Bangkok.

Some 80,000 travelers gathered on Sunday at Mo Chit bus terminal in northern Bangkok, turning the location into a dangerous hotspot for spreading the epidemic and also a source for the virus to further penetrate into provincial Thailand. Tuesday's emergency decree is aimed at preventing such hazardous situations from developing. 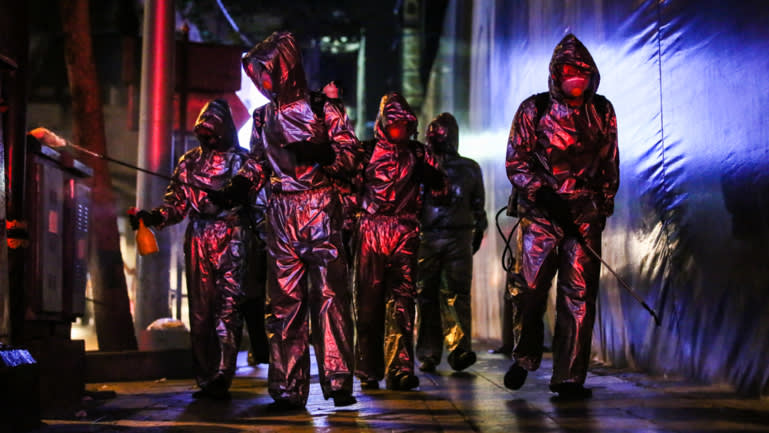 Royal Thai Army soldiers sanitize the street in Bangkok to deal with the spread of coronavirus. (Photo by Akira Kodaka)

Thailand has previously invoked emergency decrees during times of political upheaval. A decree was enacted in 2005 to enforce security in three southern Muslim-majority provinces. The decree gave the government powers such as prohibiting people from being outside at certain times, from congregating in any place, from using certain transportation routes, as well as other measures seen as necessary to maintain state security. It also allowed the prime minister to call on the armed forces to suppress any situations of serious unrest.

The new decree to be launched on Thursday could carry similar powers.

On Monday, Prasit Watanapa, dean of the faculty of medicine at Bangkok's Siriraj Hospital, part of Mahidol University, urged people to stay at home and stop socializing, otherwise coronavirus could spread in Thailand as much as it has in Italy, which as of Tuesday morning had seen 63,927 cases and 6,077 deaths.

He warned that, if the current pace of infection kept up, Thailand would have 351,948 COVID-19 cases by April 15. This will overwhelm the country's medical resources and result in 7,039 fatalities by that date, Prasit said.