JAKARTA -- Novel Baswedan has endured many things in his 14 years as an investigator at Indonesia's anti-graft agency. They include incrimination attempts, being hit twice on his motorbike, and an acid attack that rendered him permanently near-blind.

But Baswedan survived through all of those as well as many threats and other forms of intimidation, faithfully committed to his duties at the Corruption Eradication Commission (KPK) -- until he failed the so-called nationalism tests for civil servants, which led to his suspension last month and an imminent permanent dismissal.

"Some of the questions took me by surprise -- such as, 'Are the Japanese cruel?' 'Are all Chinese the same?' Questions that I don't think are important. The words used were provocative," Baswedan said while telling his story in a viral new documentary, "The Endgame."

He added that he suspected intelligence's involvement in the tests, and demanded an audit into the tests and the results and for KPK Chief Firli Bahuri to be held responsible for "vested interests."

As many as 75 out of over 1,300 KPK employees failed the tests, despite many, like Baswedan, having earned a reputation for integrity and high commitment to Indonesia's fight against graft. The video, produced by Indonesian documentary production studio WatchdoC and directed by former journalist Dandhy Laksono, features testimonies from some of the officers. It has attracted nearly 2 million views on YouTube in two weeks since its launch on June 13. 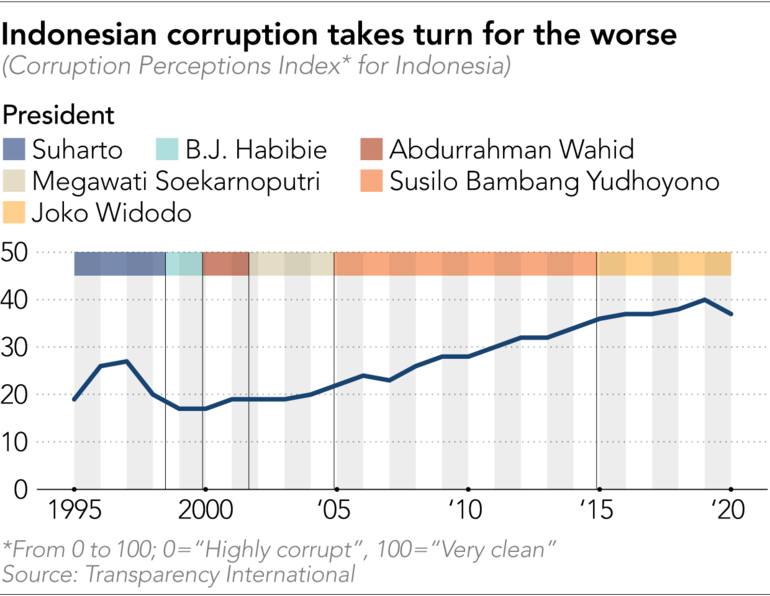 The tests were said to be aimed at weeding out Islamist radicals who, according to rumor, have infiltrated the agency. Among the questions asked were if the employees choose the country's pluralistic founding principles, Pancasila, over the Quran or vice versa, and their views on the disbanded hard-line Islamist groups Hizbut Tahrir Indonesia (HTI) and the Islamic Defenders Front (FPI).

Rasamala, of the KPK's legal bureau, said he was a Christian and did not understand why he failed the test. "I was asked about my views on HTI, FPI and religious matters. I answered neutrally, that I don't agree with those [radical] views. But still I failed the test. I'm not sure what they assessed."

Others said they were asked random, weird questions that infringed on personal privacy and were totally unrelated to corruption eradication work.

"I was asked if I was married. I said, not yet. And then they asked if I had a boyfriend -- I said yes," said a KPK public relations officer identified only as Tata. "They asked if the relationship will lead to a marriage [and] 'How many times have you been in a relationship?' 'What do you do when you're dating?'"

Baswedan believed even if the 75 officers had answered differently to appease the interviewers, they likely wouldn't have passed the tests. "Because the tests are just a tool. Their target is to get rid of [us]." 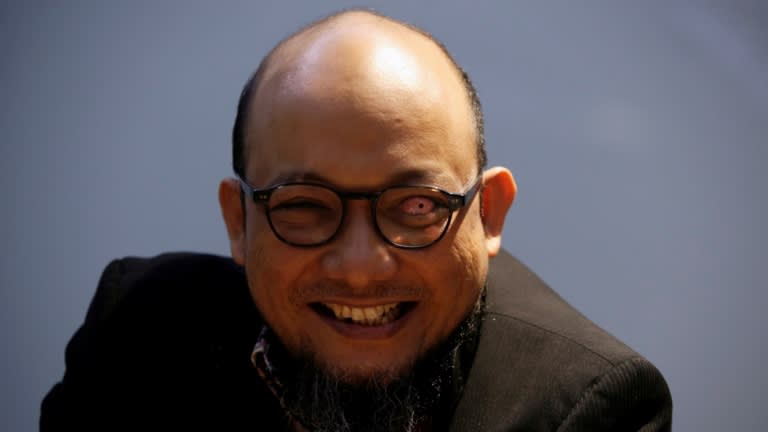 Novel Baswedan, a senior investigator of Indonesia's anti-graft agency who had acid flung in his face in 2017, smiles during a Reuters interview at Corruption Eradication Commission (KPK) headquarters in Jakarta in December 2019.   © Reuters

The tests and the results are sparking anti-graft activists' outcry over what they see as the latest in a series of blatant attempts to significantly weaken the KPK -- which until recently had been seen as one of the most credible public institutions in a country where the police and parliament are perceived as being highly corrupt.

Among the 75 are top investigators involved in major cases that have angered the public -- including alleged embezzlement from the government's COVID-19 aid fund by a former social services minister and alleged bribery of a senior election official by a candidate. Both suspects are politicians with the ruling Indonesian Democratic Party of Struggle, of which President Joko "Jokowi" Widodo is a member.

The tests follow a controversial amendment to the KPK law in 2019 that has stripped the previously powerful body of many of its independent powers -- including by lengthening procedures for wiretapping suspects and by limiting the investigation period to just a year.

The revised law also changed KPK employees' status, making them civil servants, which activists said will leave them liable to government interference. The civic tests were theoretically used to screen their eligibility to become civil servants.

Also in 2019, lawmakers unanimously voted for Bahuri, a police inspector general, to head the KPK despite objections from previous KPK leaders over allegations of ethics violations during his previous stint in the agency.

Anti-graft activists pointed out that since Bahuri took over, KPK's performance has significantly dropped. Last year, it handled just 15 cases, from 62 in 2019, according to local watchdog Indonesia Corruption Watch.

Berlin-based Transparency International said Indonesia scored 37 in its corruption perceptions index last year, down from 40 in 2019 following 20 years of steady improvement. The index ranges from zero, or "highly corrupt," to 100, or "very clean." Indonesia's CPI rankings also dropped from 85th to 102nd out of 180 countries, shortly below Ethiopia and Tanzania.

"KPK is currently entering its darkest period. The tests ... is the last nail in the coffin of KPK's death," Natalia Soebagjo, a board member of Transparency International, told a recent webinar. "[The situation] shows the lack of political will to strengthen and preserve KPK's independence ... which is very important for an anti-corruption agency's work effectiveness."

The Indonesian chapter of rights group Amnesty International called the tests "a systematic discrimination and violations to workers' rights" to have freedom of thought and belief. Bahuri has defended the civic tests, saying they were necessary to filter out people affiliated with banned organizations and ensure KPK employees' "loyalty to Pancasila, the 1945 constitution ... and the government."

In response to mounting criticism, Widodo last month said the test outcomes "should not necessarily be used as a basis to dismiss" KPK employees. The president said they should only be used to help improve the organization.

A KPK deputy chief later said 24 of the 75 employees will have to undergo a civic education program, while the rest are "impossible to fix."

"When the KPK had sharper teeth it ensnared several high-profile politicians, but it's less clear that the anti-corruption body had significantly reduced the mid- to lower-level corruption risk that businesses regularly have to mitigate," Mumford told Nikkei Asia.

He added that despite the setbacks, the government is not expected to completely give up on the anti-corruption agenda. "That said, global investors are paying increasing attention to governance, along with other ESG issues, so this could be a longer-term watchpoint."