The Philippines' Anti-Terrorism Act of 2020: Five things to know

Legislation already on Duterte's desk would give the president dramatic powers 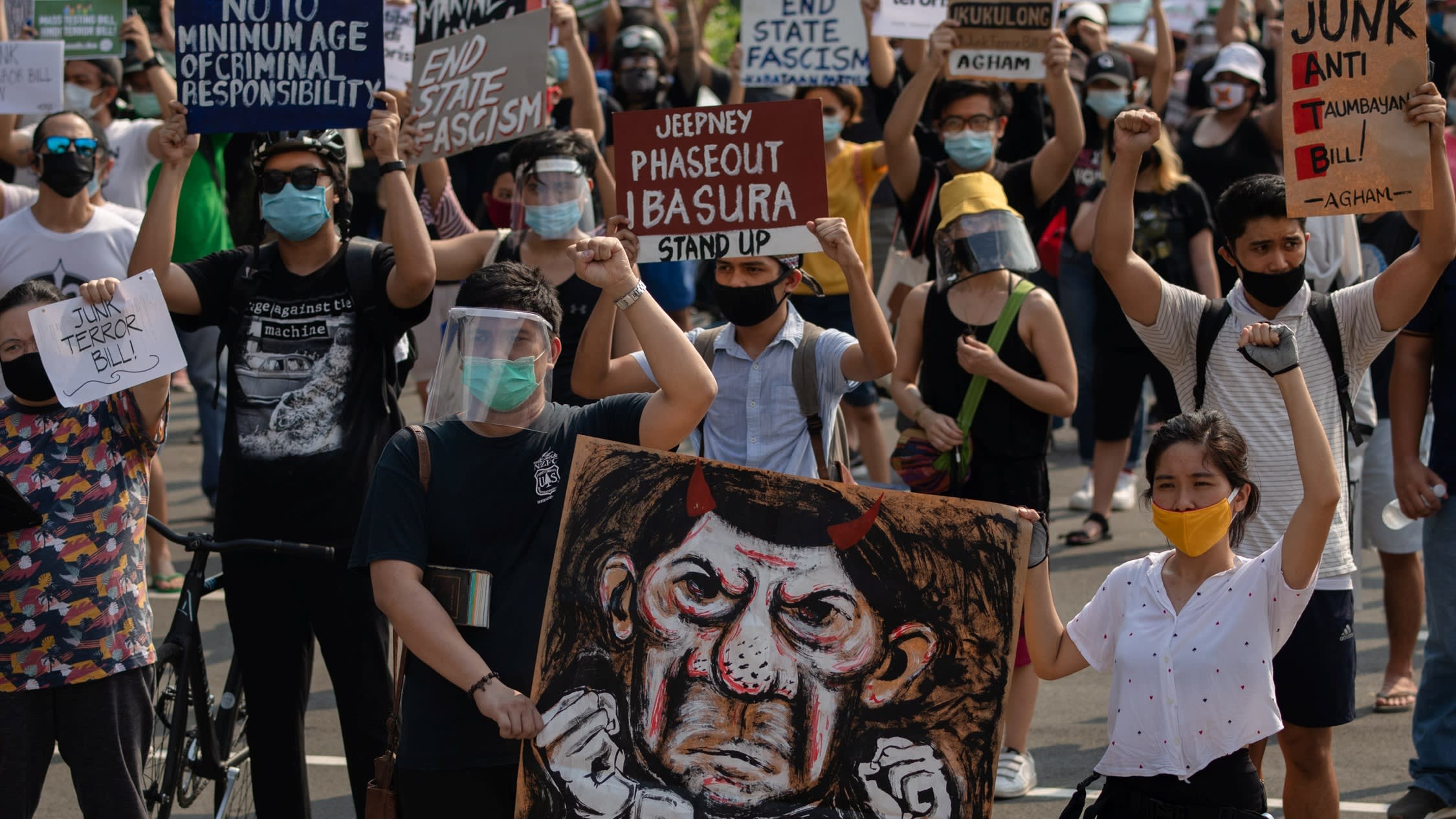 MANILA -- Days after being marked "urgent" by President Rodrigo Duterte, the Philippines' House of Representatives last week approved the Anti-Terrorism Act of 2020, adopting the Senate's version, which was passed in February.

The bill has triggered online and street protests even as community quarantine restrictions are in place due to the coronavirus outbreak. A multisectoral backlash has also ensued, but supporters of the bill are pressing on.

Here are five things to know about the legislation that has polarized the Southeast Asian nation as it grapples with the pandemic's economic fallout.

What exactly does this bill say and do?

The Anti-Terrorism Act of 2020 amends the Human Security Act of 2007. It expands the definition of terrorism to include acts intended to cause "death or serious bodily injury to any person," "extensive damage and destruction" to a government facility, private property or critical infrastructure and when the purpose of those acts is to "intimidate [the] general public," "create an atmosphere or message of fear," or "seriously destabilize or destroy the fundamental political, economic and social structures of the country." Those found guilty face life sentences without the chance of parole.

The act also criminalizes the "threat, planning, training, facilitating of" and "proposal" and "inciting" to terrorist activities by means of speeches, proclamations, writings, banners and emblems. It also subjects suspects to surveillance, warrantless arrest and detention for up to 24 days. In addition, it removes compensation for the suspect in the event of acquittal and boosts the Anti-Terrorism Council, the implementer of the law, whose members are appointed by the president.

Why is the government pushing it?

Backers of the bill say the legislation seeks to end terrorism in the country, which is still battling decadeslong communist and Islamic insurgencies. In 2017, Islamic State-aligned militants laid siege to the southern city of Marawi; last year the southern region was rocked by suicide bombings. The Duterte administration's history of cracking down on political opposition and the recent arrest of government critics are fanning fears that the pending anti-terror law will be used to further squelch dissent.   © Reuters

Even the lockdown did not stop terror, according to presidential spokesperson Harry Roque, who cited the communist rebels' attacks on soldiers securing the distribution of financial aid and attacks by Islamic militants in late May that led to an evacuation in the country's south that uprooted over 6,000 people.

Sen. Panfilo Lacson, a former police chief and proponent of the bill, said the Human Security Act of 2007 "has proved to fail in terms of its efficacy as an anti-terrorism measure," partly because it's lenient for offenders and restrictive for enforcers.

Why is it being opposed?

The Philippines' Commission on Human Rights said the broad definition of "terrorism" in the bill "paves the road for possible abuse."

"By this broad definition, starting a fight in a bar could technically be classified as an act of terrorism," said Human Rights Watch, which called the act "a human rights disaster in the making."

The overreach, according to CHR, could also be used "to limit substantial freedoms, including expression of dissent, while [with] the vague and overly broad definition, authorities could wantonly tag [the] exercise of rights as terrorist expressions."

Fears are also on the rise due to the Duterte's administration's history of cracking down on political opposition and the recent arrest of government critics during the lockdown. "It's not about going after terrorists," human rights lawyer Jose Manuel Diokno said, "but critics of this administration."

What do businesses and the international community have to say about the bill?

At least 16 Philippine business groups have jointly voiced strong opposition, calling the bill "highly divisive because it poses clear and present danger to human rights enshrined in our Constitution at a time [of pandemic] when our nation needs to come together as one."

Meanwhile, the United Nations High Commissioner for Human Rights said the bill "dilutes human rights safeguards, broadens the definition of terrorism and expands the period of detention without a warrant from three to 14 days, extendible by another 10 days. The vague definitions in the Anti-Terrorism Act may violate the principle of legality."

What are the chances that it will become law?

Duterte's office received the bill on June 9, giving him 30 days to act on it.

Amid crumbling support for the act -- some lawmakers have withdrawn their backing -- and mounting opposition from businesses, universities and the Catholic Church, the Department of Justice said it will review the bill regarding its potential to violate constitutional rights.

With the bill now on his desk, Duterte can sign or veto it anytime to reflect the executive branch's amendments. If no action is taken on it, the bill automatically becomes law in 30 days.

But given the growing opposition to the proposed law, a legal challenge in the Supreme Court is a possibility.