The Philippines chooses the 'Punisher' The firebrand mayor of Davao, known for his anti-establishment rhetoric, was swept to victory on a tide of public resentment over rampant crime and corruption and widening inequality.

During the campaign, he vowed to kill criminals and threatened to establish one-man rule to achieve his goals. "Forget the laws on human rights," he shouted at his final campaign rally as he promised to restore law and order, leading to scenes eerily reminiscent of a revolution as more than 500,000 gathered raised clenched fists.

But Duterte's ability to tackle the challenges facing the country is something of an unknown.

Despite strong growth under the Aquino administration, voters have shunned the candidate backed by the outgoing president in favor of a highly controversial figure with suspected ties to death squads and extrajudicial killings.

Aquino, who came power in 2010, has engineered a significant economic revival in a country which had fallen behind its neighbors as a result of political instability.

During Aquino's six-year term, the economy grew at an average annual rate of over 6%, among the highest in Southeast Asia.

But few of the country's 100 million people feel they are enjoying the benefits of economic growth. Signs of poverty are still highly visible in Manila. Just a stone's throw from the capital's glittering skyscrapers, people sift through heaps of garbage for anything salvageable, and many question if anything has really changed since the dark days of the Marcos dictatorship.

Aquino has failed to reform an economic model that favors the elite and has created a huge divide between rich and poor.

The economic disparity between Manila and the provinces is also on the rise. The capital's per-capita gross domestic product stood at $8,200 in 2014 -- over 10 times that in poor areas in Duterte's stomping ground on the island of Mindanao.

The widening income gap has led to a proliferation of crime and corruption. 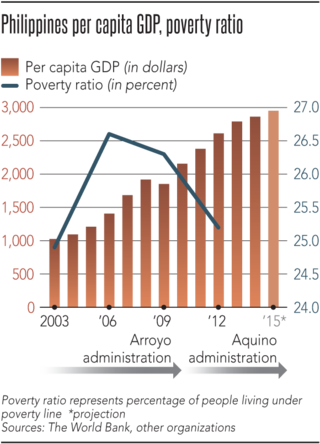 Aquino's success in attracting foreign investment and stoking economic growth may have earned him international praise, but his efforts to tackle the everyday problems faced by Filipinos have yielded few results.

Many of the emerging middle-class have lost patience with the chronic traffic jams and other aspects of the country's underdeveloped infrastructure.

After three decades of rule by "smart" politicians, the people have voted for change.

Duterte's meteoric rise has not come solely on the back of his tough stance on crime in Davao. His straight-talking, unpretentious approach also appears to have struck the right chord with the public.

Observers, however, warn that the radical changes the president-elect has promised could undermine economic stability. An official at a major Japanese bank voiced concerns about his "unclear" policy agenda.

Duterte's spokesman on Tuesday announced a policy program including the introduction of a federal system to devolve power to local government. But this initiative would require a constitutional amendment.

A reform of such kind would entail the inevitable risk of provoking a backlash among people with vested interests, says Wataru Kusaka, an associate professor at Nagoya University's Graduate School of International Development.

Meanwhile, the race for the vice presidency appears to be going right down to the wire. Voters are split between Congresswoman Leni Robredo from the Liberal Party, backed by Aquino, and Ferdinand "Bongbong" Marcos, an independent senator and son of the late dictator who was overturned by the 1986 "Yellow Revolution."

Observers also warn that foreign policy may not be in entirely safe hands under a Duterte administration. When a distasteful "joke" about the 1989 rape of an Australian missionary was rebuked by the Australian and U.S. ambassadors, he threatened to sever ties with both countries.

Duterte's strongman rhetoric has resonated with a population fed up with rampant crime. But if he is true to his word, both domestic politics and diplomacy could sink into confusion.

The world is watching closely to see whether the man known as the "Punisher" will have the level head required for governance and leadership.