The year of the ballot

The Year of the Monkey? You could also call 2016 the year of the ballot. Voters across the Asia-Pacific region will be heading to the polls. Will the results make the regional economy more resilient to global ups and downs? Will they enhance peace and stability? When citizens cast their ballots, they will be deciding much more than the nature of their own governments.

Taiwan will kick off the election procession on Jan. 16. Tsai Ing-wen, head of the opposition Democratic Progressive Party, is considered a shoo-in to become president, in light of her huge lead in the polls. The Nationalist Party, or Kuomintang, of President Ma Ying-jeou has been in power for eight years, and the public appears fed up with its economic policy.

The burning question is how a DPP victory would affect Taiwan's relationship with China, its most important trade partner. At first glance, a major shift in economic ties appears unlikely. Taiwan needs the gigantic mainland market, while China is eager to tap the island's technological prowess. At the same time, Taiwan's stalling economy gives China leverage. Taipei may have little choice but to work with Beijing as it gropes for ways to spur growth.

Still, the DPP's diplomatic stance creates some uncertainty. When Chinese President Xi Jinping and Ma met in Singapore on Nov. 7 -- the first top-level summit since the two sides split in 1949 -- they confirmed that the so-called 1992 Consensus, based on the one-China principle, is the foundation of the bilateral relationship. Yet Tsai's party refuses to acknowledge that consensus.

Tsai says she will maintain the cross-strait "status quo" but has yet to clarify her vision of Taiwan as a political entity. She has been unwilling to discuss the historic summit in November and seems intent on preventing the consensus question from becoming a focal point of the election.

This is a crucial matter for Asia as a whole. Would a Tsai government seek to distance itself from China? And how would cooperation with the U.S. come into play?

Consider the implications of Taiwan potentially joining the Trans-Pacific Partnership -- the U.S.-led trade liberalization pact 12 nations agreed on in October. Although Taiwan has effectively concluded a free trade deal with China, the two sides are still negotiating the elimination of tariffs. If Taipei were to prioritize economic ties with the U.S. and Japan, another powerful TPP member, it would reduce its reliance on Beijing.

Taiwan's election -- and the next government's approach vis-a-vis China -- could impact maritime security as well. During the Taiwan Strait Crisis of 1996, China test-fired missiles toward the island. If things heat up again, the U.S. will feel compelled to reinforce its military presence in the area. Xi may be watching Tsai's rise with trepidation.

From a security standpoint, the Philippines' presidential election on May 9 may be even more important. And unlike Taiwan's, this race is wide open.

Grace Poe, a popular senator, had pledged to continue incumbent President Benigno Aquino's pro-U.S. foreign policy but faces possible disqualification because she spent much of her life stateside. 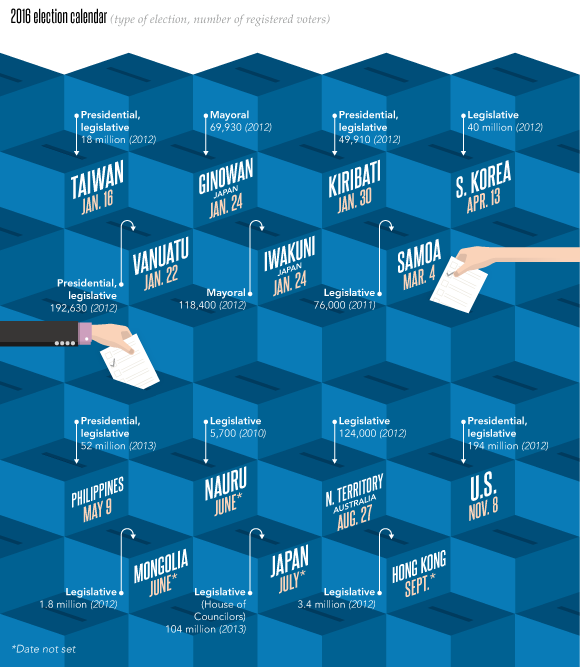 Aquino has endorsed Manuel Roxas, a former secretary of the interior and local government, as his successor. Roxas, however, has struggled to strike a chord with voters.

Corruption allegations swirl around incumbent Vice President Jejomar Binay. Nevertheless, he is popular in rural areas, to which he directs large sums of money for development. Binay has adopted an anti-Aquino platform and is reportedly pro-China. If Poe is barred from the race, leaving Roxas and Binay to battle it out, the odds currently favor the latter.

One thing is clear: The Philippines needs a strong leader. The country is on the front line of the U.S.-China standoff in the South China Sea. It lies a stone's throw from the Spratly Islands, where China is building artificial islands.

The Philippines has been able to stand with the U.S. because of its brisk economic growth. And that growth is at least partly attributable to the Aquino government's steady hand. During the administration of President Gloria Macapagal Arroyo, from 2001 to 2010, the Philippines muddled along economically, often relying on Chinese official development assistance.

RULE OF LAW OR MAN?   The U.S., which will hold its own presidential election in November, may be watching the Philippine campaign nervously.

When U.S. President Barack Obama arrived in Manila for the Asia-Pacific Economic Cooperation forum in November 2015, he went straight from the airport to inspect the Philippine navy. He promised Aquino a roughly $80 million financial assistance package, including a donation of patrol ships.

On its own, the Philippines lacks the muscle to protect its waters from invasion. The navy has few modern warships. The air force has been scraping by without a full-fledged fighter jet, though it is set to deploy this year light fighters the Aquino government ordered from South Korea. Philippine bombers and other aircraft are mainly used to subdue anti-government rebels on the island of Mindanao.

If the pro-China Binay is elected president, the repercussions could be felt regionwide. Beijing will be looking for any opportunity to drive a wedge between Manila and Washington, allowing it to step up its advance in the South China Sea.

On the other hand, if the Philippines and Taiwan were to join the TPP, it would go a long way toward entrenching the rule of law around the South China Sea. Aside from China, the other economies in the area are already party to the agreement -- Vietnam, Malaysia, Singapore and Brunei. Transparency and fair market competition are doubtless preferable to China's "rule of man," under which power and connections trump all.

The history books may look back on the elections in Taiwan, the Philippines and the U.S. as a rare confluence of region-shaping events.

This year will also bring local elections with international implications. The Jan. 24 mayoral vote in Ginowan, a city in Japan's southernmost Okinawa Prefecture, is one example.

The U.S. Marine Corps' Futenma air base occupies 25% of the land in the small municipality, home to 96,000 residents. The facility plays a key role in the defense of the East China Sea, including Japan's Senkaku Islands -- a group of islets claimed by China, which calls them Diaoyu. The campaign has largely focused on the question of whether the base should be relocated to a less densely populated part of Okinawa, as planned.

Over in Australia, a legislative election in an isolated region could also have profound influence on Asia-Pacific security.

Australia's Northern Territory accounts for 17% of the nation's land but only 2% of its population. The legislative election there matters because the territory's small capital, Darwin, is a strategic point.

The U.S. Marines watch over the South China Sea from Darwin, which has a population of 110,000. This is part of President Barack Obama's "pivot to Asia" policy, promoted by current presidential candidate Hillary Clinton when she was his secretary of state. But in November, things grew complicated when Landbridge Group, a Chinese infrastructure management giant with strong ties to the People's Liberation Army, signed a 99-year lease to run the Port of Darwin.

Darwin, which needs jobs as well as better infrastructure, welcomes Chinese investment. But the Landbridge deal has the federal government worried because it means China will manage a port used by the U.S. military. The arrangement, which was concluded legitimately, has drawn complaints from the White House and U.S. Congress. The legislative election could determine the fate of the lease contract.

Also worth watching will be legislative elections in South Korea in April and Hong Kong in September.

Looking at the bigger picture of a region sandwiched between two superpowers, Asian voters essentially have two choices. They can opt for an economic order based on vague rules created under the influence of China, whose economy is slowing. Or, they can step toward a true rules-based order rooted in democracy, embracing a U.S. that has recovered from the Lehman Brothers crisis and tightened its monetary policy at last.

STEPPING FORWARD   Of course, Asian nations need not always rely on big powers, nor allow themselves to be pushed around -- provided they can build resilient economies of their own. This requires developing homegrown industries and stoking domestic demand. And to do that, effective governance and transparent decision-making are vital.

Throughout 2015, Asian nations made strides toward democracy and economic reform.

In Myanmar, after a series of liberalization steps by the nominally civilian government of President Thein Sein, human rights icon Aung San Suu Kyi's National League for Democracy won a landslide victory in the general election in November. The NLD is to take power in February, officially ending decades of military dominance.

In Sri Lanka, the United National Party of Prime Minister Ranil Wickremesinghe formed a coalition government after parliamentary elections in August. The new government -- unlike the pro-China administration of former President Mahinda Rajapaksa -- is expected to pursue more balanced diplomacy.

In Singapore, the ruling People's Action Party won the general election in September by an overwhelming majority. But after the death of Lee Kuan Yew -- the founding father who made the city-state a "developmental dictatorship" -- there is a sense that Singapore is urgently seeking to forge its own democratic model.

Now, as those winds of change blow through relatively small states, the Asia-Pacific region is primed for pivotal elections.

Thailand would have been on the list, too, had it not postponed the general election originally scheduled for this year. Yet the military junta cannot rule indefinitely; sooner or later, the Mekong power will have to go with the flow of political progress now sweeping the region.

In the meantime, the rest of the world will be watching as Asia-Pacific voters make their big decisions.